We use cookies to provide you with a better experience. By continuing to browse the site you are agreeing to our use of cookies in accordance with our Cookie Policy.
Home » Blogs » SCQ Forum » The high cost of fuel

The high cost of fuel

Diesel has become a greater component of freight cost and carrier profits across all modes.

The topic of fuel prices has been on the forefront of most people’s mind lately. We have seen historic highs in fuel prices recently and this expense effects not only our daily lives by eating into discretionary income – but as the second largest cost – it affects the transportation industry profoundly. Diesel has become a greater component of freight cost and carrier profits across all modes.

Since February of this year, the price of fuel has continually been rising, resulting in record high numbers. Looking back to just last June, the average price of fuel was $3.16 whereas this June hit $5.03 - although we have experienced some relief in July with the average of $4.67 per gallon. What does this mean for the shipper?

For the shipper this means that the overall cost of logistics and transportation has increased greatly and without the ability to predict increases. Additionally, it means that shippers should become increasingly wary of carriers that use fuel as a profit source. While companies might have budgeted for the anticipated annual increases that occur, most have not prepared themselves for the drastic and unpredictable increases the industry has experienced in the past year.

Most ground carriers base their fuel surcharges on the weekly national average diesel price that is supplied by the U.S. Energy Information Administration (EIA). Each carrier has their own fuel surcharge tariff and many carriers have made changes to their fuel tariffs this year. In today’s LTL market, more than 1/3 of a basic invoice is the cost of the fuel surcharge. In fact, LTL carriers rely heavily on fuel as the primary source of profits. In Truckload about half of the invoice will be driven by fuel. Ground parcel fuel surcharge more than doubled YOY for both carriers, 131% and 116% increase for FedEx and UPS respectively, rising far faster than the indices.

Air services too have seen big changes. In April of this year, FedEx changed their fuel surcharge for the second time since late last year and UPS followed immediately. In the graph below, the red line shows the actual air fuel surcharge FedEx implemented. If FedEx had chosen to not make these changes, the fuel surcharge shippers would pay today would be the orange dotted line, 3.5% lower than what it is currently. 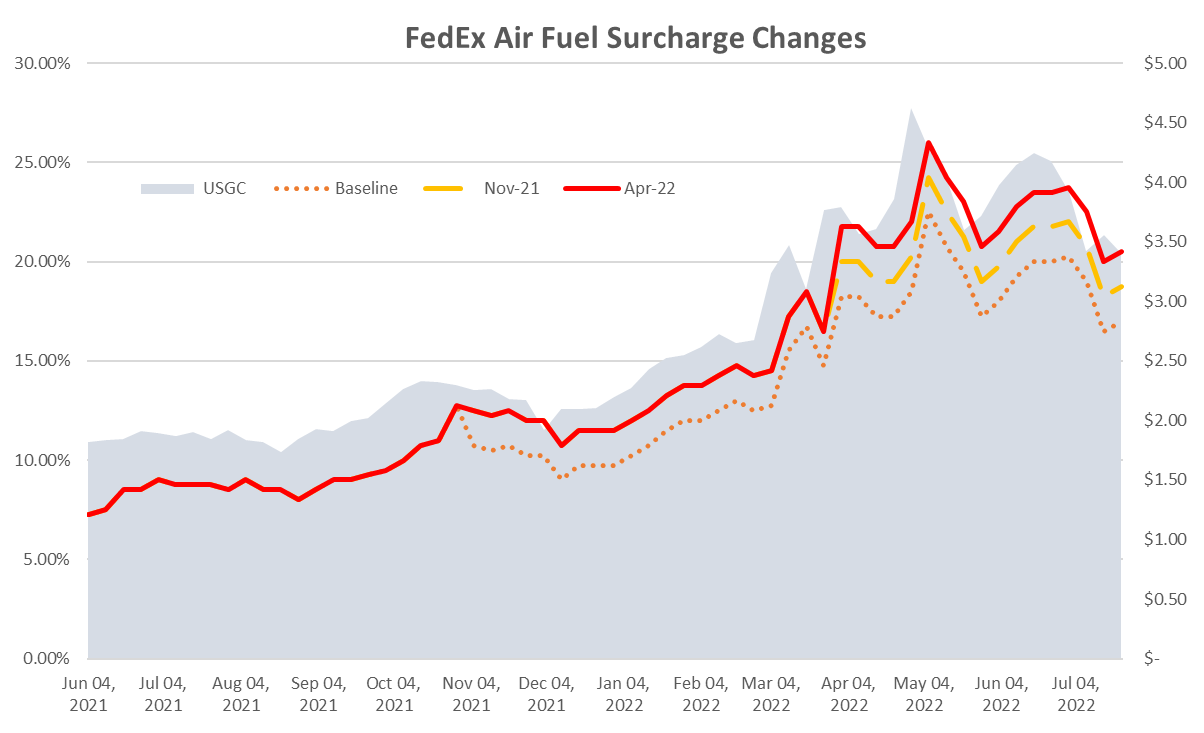 As gas prices increased, carriers have found it to be justifiable to raise their own fuel surcharge. Along with the General Rate Increases and other surcharge increases (yes, fuel surcharge applies to other parcel surcharges too), this could become a significant unplanned issue in a shipper’s budget.

So, what can a shipper do to “soften the blow”? They will first need to know their spend and understand how it changes overtime. The best advice is to seek help from experts on this matter who can help model and mitigate the increases before it breaks your business model.
You must login or register in order to post a comment.