We use cookies to provide you with a better experience. By continuing to browse the site you are agreeing to our use of cookies in accordance with our Cookie Policy.
Home » Blogs » Reflections » Najlla’s story and America’s shame

Steve Geary is adjunct faculty at the University of Tennessee's Haaslam College of Business and is a lecturer at The Gordon Institute at Tufts University. He is the president of the Supply Chain Visions family of companies, consultancies that work across the government sector. Steve is a contributing editor at DC Velocity, and editor-at-large for CSCMP's Supply Chain Quarterly.

The withdrawal from Afghanistan was a logistics disaster, and one that put a friend in harm’s way. 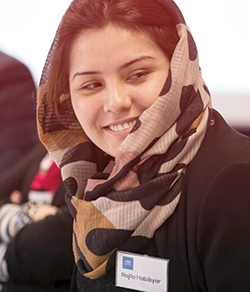 “I am a U.S green card holder, and I have been left behind.”

On Tuesday, August 31, President Biden stood before the world and said, “Last night in Kabul, the United States ended 20 years of war in Afghanistan—the longest war in American history. We completed one of the biggest airlifts in history, with more than 120,000 people evacuated to safety.”

Forgive the skepticism, but this opening to the President’s speech merits a fact check. The U.S. exit did not end the war, just Western involvement in the war. People are still dying every day from government-sanctioned executions, in factional battles with an ISIS insurgent group, and from illness and malnutrition.

The U.S.-led evacuation was a monumental logistics failure. Consider Bagram Air Base, found 30 miles north of Kabul. Heavily fortified, accessible, and defensible, the base served as the center of activity for the U.S.-led military coalition during its two-decade long involvement in Afghanistan. With two huge runways, Bagram could handle any size aircraft, including the C-5 Hercules. It would seem to be a good location to stage a large-scale evacuation.

The U.S. chose to abandoned Bagram Air Base on July 1, 2021. The last remaining U.S. troops left the base by shutting off the electricity and slipping away in the night, without even notifying the Afghan Armed Forces, our partners in protecting the base. On August 15, Afghan troops surrendered the airfield—now looted—to the Taliban.

Apparently, U.S. decision makers instead opted for a politically driven decision to evacuate from the capital of Kabul, not Bagram. The choice to evacuate from a congested urban environment instead of a defendable airfield, however, led to chaos. Clearly logistics success was not the primary intent of the exit plan, and, as a result, we left people behind, including U.S. citizens, U.S. green card holders, coalition allies, and Afghan citizens who had risked their lives and partnered with us. Some of those abandoned are now dead.

One of those who was left behind is a friend of mine. Her name is Najlla Habibyar.

From 2014 to 2017, Najlla served as one of the highest-ranking women in the administration of the last president of the Islamic Republic of Afghanistan, Ashraf Ghani. While in that role, she also started “Pink Taxi,” six cabs driven by women for women passengers. Pink Taxi was a sensible precaution for women needing transport in Kabul.

But risks mounted for Najlla, and she began receiving death threats because of her refusal to accept bribes in her governmental role. As a result, she resigned from her position and fled the country, going into exile in Washington, D.C. A year later, she returned to continue her work to build a new Afghanistan. She became the chief of party for the Kabul Carpet Export Center, an initiative sponsored by the United States Agency for International Development (USAID). Protected by the envelope of coalition support, Najlla rolled up her sleeves and got back to work.

“No matter how many times this country has been destroyed, we all have loved it unconditionally,” Najlla explained.

But when the Taliban regained control of Kabul, staying in the country was no longer safe for Najlla and her family. They repeatedly fought their way through the chaos and mobs gathered at the gates outside of Kabul International Airport only to be turned back time and time again. Najlla—a U.S. green card holder —and her family made five attempts to get through the checkpoints and into the airport. They tried the North Gate. They tried the Abbey Gate. They tried the Annex Gate. Each time, they failed. On August 30, the last U.S. military flight departed, leaving behind Najlla and thousands of others who had put their faith in us and needed our help.

After the collapse and being abandoned by the U.S. government, Najlla went into hiding with her family and began a logistical cat-and-mouse game. Things looked bleak. Her family was informed that she was on a target list, and she was hunted by the new government, moving seven times over the course of two weeks.

Najlla ultimately found help not from the State Department or USAID, but through “Digital Dunkirk,” a volunteer effort run by ex-U.S. military officers that created an underground network to rescue Afghans who had helped Americans. (The name is a reference to the Dunkirk evacuation during World War II, which relied heavily on civilian volunteers using their own boats to rescue Allied troops trapped in France.) While Digital Dunkirk included well-established groups like No One Left Behind, which has worked for years to bring military translators back to the U.S., it also relied heavily on ad hoc coalitions of veterans that were formed during the chaos of the official evacuation efforts and used social media apps for communication. These groups worked outside of the oversight of the U.S. government to facilitate exits for those at risk of being left behind.

“It was not the Biden administration that got us out. It was Digital Dunkirk, ex-military volunteers,” Najlla reported in a video journal posted by The New York Times.

Digital Dunkirk figured out how to do what the U.S. government could not. They found funding, gathered intelligence, set up virtual operations centers, coordinated stakeholders, synchronized logistics, and slipped directly into the theater to escort Afghans out. As reported by Laura Keenan of the Modern War Institute, “The sum of their efforts created a modern-day Underground Railroad moving evacuees from location to location.”

Today Najlla and the 20 family members who left with her are in Emirate Humanitarian City, a refugee camp in the United Arab Emirates. They are waiting. They are hoping. They should not be abandoned by us.

Author’s note: You can learn more of Najlla’s ordeal in a video diary published by The New York Times, “My toxic Afghan love story” at https://www.nytimes.com/video/opinion/100000008007152/afghanistan-taliban-women-exile.html. Najlla Habibyar can be reached by email at n.habibyar@gmail.com. Please drop her a note of encouragement, to let her know she is not forgotten.