We use cookies to provide you with a better experience. By continuing to browse the site you are agreeing to our use of cookies in accordance with our Cookie Policy.
Home » Payroll cycle economics and supply chain dynamics
Monetary Matters

The rise in the number of Americans living below the poverty line, as well as the growing number who are receiving need-based government assistance benefits, highlights a mounting trend that retailers and supply chain managers have noticed over the past seven years: namely, the pronounced role that "payroll economics" plays in consumer behavior.

A study by the Brookings Institution estimates that one-third of U.S. households are consuming their entire paycheck every pay period. As more Americans are living paycheck to paycheck, consumer shopping patterns in the first two days after a paycheck arrives is becoming an increasingly important factor in retailers' forecasting and replenishment plans. 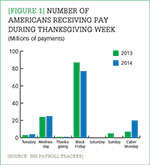 In 2013, approximately 14.5 percent of the U.S. population was living below the poverty line—a rate that has been consistently elevated since the onset of the Great Recession (December 2007-June 2009). The last time the United States had such sustained, high rates of poverty was during the 1960s. In addition, the country has seen a steady rise in the participation rate in need-based government assistance programs. The Supplemental Nutritional Assistance Program (SNAP), also known as the food stamp program, last year reached an all-time high of nearly 47 million participants. This is nearly double the number of Americans participating in the program 10 years ago. In addition, other forms of need-based government assistance programs are also seeing a rise in enrollment. For example, the number of recipients receiving Disability Insurance (DI), the compensation disbursed to individuals who cannot work because of a physical or mental condition, has increased 50 percent in the last 10 years.

It is not just the lower class feeling the pinch, however. A majority of middle-class households also fall into the paycheck-to-paycheck population. Most of the growth in income has been among the top 5 percent of earners, while median household income adjusted for inflation is approximately 8 percent below its 2007 level. In fact, the bottom 70 percent of Americans are still struggling; many middle-class families were forced into a lower standard of living since the Great Recession and during the subsequent anemic recovery.

The combination of income growth among mostly top earners and the elevated poverty rates and poor performance in real median household income among lower- and middle-income earners has caused a bifurcation in consumer spending patterns. Both discount and luxury stores are doing well, and spending on fine dining and luxury items has been especially strong, reflecting the stock market's robust performance over the past year. Middle-tier retailers, however, are having a hard time gaining traction. The influence of payroll cycle economics has become particularly relevant for this group, as retailers are seeing more volatile spending patterns that are linked to days when employer paychecks or assistance benefits are disbursed.

Contrary to popular belief, not everyone in the United States is paid on Fridays. Government assistance payments—which make up a majority of income for the lower-income groups—tend to be in the beginning of the month (regardless of the day of the week). In the private sector, the timing and frequency with which employers choose to pay their employees can vary by a company's size, industry, location, and accounting practices. Employees in industries such as construction and retail, for example, are more likely to be paid weekly, while those in the education or professional service industries have higher percentages of monthly, semimonthly, or biweekly payments. As a result, the industrial and economic composition of a local community can dramatically influence the payroll cycle economics of its population; popular paydays can be very different even in counties located close to each other. To be most efficient, retailers and their supply chain managers would likely want to base their merchandising, stock, labor, and sales promotions plans on the payroll cycle economics in the area surrounding a specific store location.

The impact on planning and forecasting
Several factors in 2014 contributed to a "Black Friday" (the day after the Thanksgiving holiday and one of the busiest shopping days of the year) that was not as favorable to U.S. retailers as has been the case in the past. Some of the other contributing factors include:

By understanding the timing of consumer paydays and the impact that has on spending patterns, supply chain managers for many retail and consumer goods manufacturers can better identify the factors that may be contributing to a surge in sales by the week, and even by the day. As such, tracking payroll cycles may be advantageous for the following five planning scenarios:

Supply chain, logistics, and warehouse managers generally are aware of the impact on their companies of broad economic trends and how that trickles down to their level of operations and decision making, but they may not think of something as specific as payroll cycles and the timing of government assistance benefits as having much of an influence on their work. However, as we've seen, economic factors that may appear on the surface to be unrelated or only tangentially relevant can have a significant impact on demand, and therefore they bear watching as potential considerations in planning and forecasting.

Laura Hand is Director—Business Planning and Strategy at IHS Consulting.
Chris G. Christopher, Jr., is executive director of the U.S. Macro and Global Economics practice at the research and analysis firm IHS Markit.
You must login or register in order to post a comment.