We use cookies to provide you with a better experience. By continuing to browse the site you are agreeing to our use of cookies in accordance with our Cookie Policy.
Home » Global trade in transition: From hyperglobalization to a globalized world
Monetary Matters

Global trade in transition: From hyperglobalization to a globalized world

Global supply chain trends and overall international trade are starting to stabilize. As the emerging markets' rapid growth of the early 2000s has slowed, a more sustainable, albeit slower, growth pattern has prevailed. Advanced economies, such as the United States, continue to witness below-trend growth in gross domestic product (GDP), while Western Europe is exposed to both uneven and sluggish growth. The combination of such slow and/or uneven growth has important implications for global supply chain dynamics.

According to IHS Chief Economist Nariman Behravesh, many of the emerging market economies witnessed rapid expansion over the past 12 years for three primary reasons. First, "hyperglobalization" occurred during the late 1990s and early 2000s as many U.S. and European companies shifted manufacturing operations overseas. Second, emerging markets were able to access credit at historically cheap rates. And third, there was a run-up of commodity prices—the so-called "commodity super cycle." As is typical of many developing or emerging economies, during the boom years those countries failed to institute the structural reforms that would enable them to deal with a slower pace of growth. 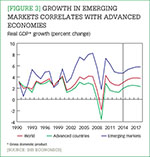 Meanwhile, real GDP growth in the United States averaged 3.2 percent per year between 1980 and 2007. Since the end of the "Great Recession" (December 2007 to June 2009), however, growth has averaged just 2.3 percent. The gap is especially notable when the post-recession growth rate is compared to past expansions, when a fast and substantial recovery was the norm. Furthermore, the eurozone has experienced a two-tiered geographic growth path: The northern tier is holding steady and witnessing relatively stable growth while the southern tier is slowly recovering, but from a very deep and prolonged recession.

The combination of a slowdown in emerging markets and subpar growth in the United States and Europe has slowed world trade. IHS expects global GDP growth to pick up in 2014. It's a different story, however, with global trade, defined as world imports as a percentage of global GDP. In the mid 1990s, global trade started increasing from a 20-percent reading, and by 2007 had reached 30 percent. Global trade has been relatively flat in the past couple of years—hovering in that same 30-percent range—and is not expected to gain significant traction this year. (See Figure 1.)

Slower growth ahead
The worldwide financial meltdown of 2008 strongly hurt growth and trade, although export orders (especially from China) did bounce back rather nicely. Since the latter half of 2011, however, U.S. exports and imports have slowed considerably (see Figure 2). Chinese exports have gained some traction during that period, but at a considerably slower rate than they did following the global financial meltdown.

As shown in Figure 3, emerging markets, developing economies, and advanced economies are highly interdependent. Prior to the 2000s the GDP growth links between these three economic blocs was relatively weak, but those links will continue to be tight for at least the next few years.

Our analysis implies that many emerging markets are unlikely to maintain their relatively strong growth rates through export growth. They will also find it difficult to spur domestic consumption, as debt levels are relatively high and the share of consumer spending to GDP for most emerging markets is rather elevated. Aging national populations and low fertility rates will also contribute to a slowdown in consumer spending. The exception is China, which enjoys a consumer spending-to-GDP ratio of 35 percent and is expected to achieve cumulative growth of 40 percent by 2025.

These international trade and output growth patterns have several implications for global supply chains. The "low-hanging fruit" (easily achieved benefit) of hyperglobalization is a thing of the past. Supply chain managers will need to monitor demand and inventory levels very carefully. In addition, most economies will not be able to grow by exports alone and will need to take on significant structural reforms if they are to be better suited to handle the slower GDP growth that appears on the horizon.

Chris G. Christopher, Jr., is executive director of the U.S. Macro and Global Economics practice at the research and analysis firm IHS Markit.

E-commerce in a connected world