We use cookies to provide you with a better experience. By continuing to browse the site you are agreeing to our use of cookies in accordance with our Cookie Policy.
Home » Three trends to watch

For such a well-established industry, warehousing is experiencing a great deal of change of late. In fact, our firm, which helps companies select the best sites for their businesses, views distribution and warehousing as being at the leading edge of a number of trends affecting other key sectors like manufacturing, information technology (IT), sales, customer service, and even the head office.

Among the leading-edge trends that are forcing companies to re-examine their warehousing and distribution center (DC) operations, three in particular stand out: same-day delivery, sustainability, and increased regulation. 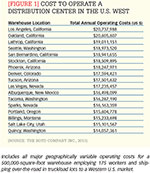 [Figure 1] Cost to operate a distribution center in the U.S. West Enlarge this image

The push for same-day delivery
U.S. society is hungry for instant gratification. To satisfy that hunger, Amazon.com is on a quest for the "holy grail" of distribution—same-day delivery. The online retailing giant's efforts can be seen in its recent decisions to locate warehouses in large and highly concentrated markets like California, New York, and New Jersey in spite of less-than-stellar business climates and high operating-cost structures. Facing increased taxes from cash-poor states and the coming of a national Internet sales tax, the Web merchant has shifted its DC site selection strategy from locating its fulfillment centers in low-cost, small-market cities in the hinterland to one focusing on proximity to major U.S. population centers. By doing so, the company has set the stage for offering same-day or next-day delivery to a major segment of the U.S. market.

Other companies in the booming e-commerce sector, all wanting to advance their case against brick-and-mortar retailers, will be following Amazon's lead. Look for more DCs sprouting up in states like New Jersey, Florida, Illinois, Texas, and California in 2014.

Green leads the way
In the past decade, sustainability and "green" principles have increasingly crept into the mission statements and core values of many corporations. Those ideals are having a direct impact on where DCs are located, what activities they perform, and how they operate.

For example, sustainability and green goals are driving forces behind the growing trend of locating new DCs close to intermodal terminals. Locating DCs near a rail terminal can help shippers reduce their carbon footprint by making it easier for them to incorporate more rail transportation into the supply chain. Rail is recognized as being considerably more "environmentally friendly" than over-the-road trucking. Consider the fact that on average, rail can move one ton of freight 476 miles on a single gallon of gas. This is the equivalent of your SUV getting over 250 miles to the gallon. The U.S. Environmental Protection Agency (EPA) estimates that railroads account for less than 10 percent of all transportation-related CO2 emissions while also alleviating highway congestion. Rail could get even cleaner if BNSF Railway continues to move from diesel to liquefied natural gas (LNG).

The green movement is affecting not only the location of distribution centers but also what activities they perform and how they operate. For example, Boyd Company clients Hewlett-Packard (HP) and Dell have increased the reverse logistics activities at their distribution centers. They are now receiving and processing more outmoded electronics and print cartridges at their DCs in an effort to reduce the environmental impact of their products. These efforts minimize the amount of waste that ends up in landfills and help customers dispose of unwanted products in an environmentally sound manner.

The pressure of new regulations
Another trend affecting distribution center operations is the increase in legislation and regulation. For example, current legislation affecting the trucking industry might tilt the scales even more strongly in favor of distribution centers using intermodal services and locating near rail terminals. Regulations such as the driver hours-of-service rules and mandatory electronic on-board recorders (EOBRs) are helping to drive trucking costs upward. Trucking companies will also be hit hard once the Affordable Care Act takes effect and health insurance premiums start to rise. The Teamsters are especially upset that multiemployer, or "Taft-Hartley," plans that cover unionized workers in the transportation industry will likely have higher premiums because the Affordable Care Act does not include tax subsidies for them. Given the rise in costs and the pressure on margins, Boyd Company is projecting over-the-road trucking costs to increase by about 6.3 percent in 2014. That's up from a projected 5.5-percent rise in 2013. As labor and fuel expenses push overall trucking costs higher, more and more companies are choosing to use less costly intermodal services and locate their DCs closer to intermodal terminals.

One regulatory act that is receiving keen attention among our logistics clients is the U.S. Food Safety Modernization Act (FSMA). This law will have major implications for any company that's involved directly or indirectly with our nation's food supply. To comply with FSMA, food companies will have to produce a written food-safety plan, specific to each distribution center, that outlines hazards, prevention, monitoring, verification procedures, and a recall plan. Moreover, the U.S. Food and Drug Administration (FDA) will want to see proof that food was transported at the proper temperature throughout its journey. Both transportation companies and distribution centers will need a product-tracing system that is capable of tracking temperatures.

Compounding the difficulty of FSMA compliance is the lack of vertical integration within the U.S. food supply chain, which is made up of multiple enterprises like producers, packers, transporters, processors, distributors, wholesalers, and retailers. Rarely are more than a few of these enterprises controlled by a single entity. However, in order for FSMA compliance to work, there needs to be a certain level of supply chain integration among these enterprises. Our firm is forecasting that the intermodal sector will assume a leadership role with respect to FSMA. We believe that intermodal players will be able to build upon their experience dealing with multiple supply chain parties to oversee this level of integration.

As the intermodal sector assumes this leadership role, those DCs that handle food will see an advantage to being located close to an intermodal facility. Indeed, it's important to note that perishable goods like produce, ice cream, frozen pizza, and fresh fruits and vegetables are now moving intermodally at record levels.

Costs still rule
Although regulation, sustainability, and same-day delivery will all have an impact on the warehousing industry, the overriding issue confronting our distribution center clients has to do with cost containment. Bottom-line economics still rules the warehouse site selection process given spiraling fuel costs, a softened U.S. economy, continued uncertainty in Europe, and an ongoing credit crunch that is expected to stretch into 2014. For many of our DC clients, improving the bottom line on the cost side of the ledger is far easier than on the revenue side.

Even within the same U.S. region, operating costs for a typical DC can vary greatly by geography, and a less-than-optimum location will result in higher costs that could compromise the company's competitive position for years.

Figure 1 illustrates how DC operating costs can vary within the U.S. West, a high-growth region for new facilities. This 2013 analysis includes all major geographically variable operating cost factors, such as wages, benefits, real estate, property taxes, utilities, and shipping. The chart shows, for example, that annual operating costs for a representative 500,000-square-foot DC employing 175 nonexempt workers range from a high of US $20.7 million in Los Angeles, California, to a low of $14.1 million in Quincy, Washington, a spread of $6.6 million, or a 31-percent differential.

In many cases, energy and construction costs contribute greatly to the differences in annual operating costs. For example, annual costs for land and warehouse construction in the most expensive location, Los Angeles, total $6.6 million, while those costs would be $4.2 million in the least expensive location, Quincy, Washington. Similarly, energy costs in Los Angeles total $2.3 million per year but only $713,000 in Quincy.

It's often possible for companies to address cost containment through their efforts to respond to the three key trends discussed in this article. For example, locating close to intermodal terminals will help not only with sustainability efforts and compliance with food safety regulations but also with reducing shipping costs. Similarly, locating in Quincy, Washington, as opposed to Los Angeles could be not just cheaper but also greener, as the area has a green energy source: low-cost hydro power from the Columbia River.

In today's increasingly complex operating environment, distribution centers that can find ways to effectively respond to these and other industry trends while also containing costs are the ones that will find themselves on the path to future success.