We use cookies to provide you with a better experience. By continuing to browse the site you are agreeing to our use of cookies in accordance with our Cookie Policy.
Home » Mexico’s nearshoring potential: Weighing opportunities and risks
MONETARY MATTERS

Over the next five years, incentives for nearshoring to Mexico will remain high for companies serving the U.S. market, but labor concerns and security-related risks may persist.

Mexico is well placed to benefit from companies looking to nearshore, or relocate their operations closer to their main destination markets, in response to recent supply chain shocks such as the Russia-Ukraine conflict and China's dynamic COVID containment policy.

The development of integrated supply chains between Mexico and the U.S.—which cover diverse economic sectors such as manufacturing, automotive, aerospace, agriculture, and textiles—has contributed to Mexico retaining its place as the second-largest U.S. trade partner in 2021 after Canada. If more companies begin nearshoring to Mexico, it would have a sizeable impact and significantly improve Mexico's economic standing beyond the five-year outlook.

One of the benefits of locating manufacturing in Mexico is its shared land border with the U.S. Almost 88% of U.S.-bound Mexican exports are transported by road to the U.S., meaning that bilateral trade between the two countries generally avoided the container- and port-related disruptions that have affected global seaborne trade over the past year.

Companies relocating to Mexico in the next five years, however, are still likely to face security-related risks, particularly road cargo theft and extortion. Reported cases of extortion rose by 28% year-on-year nationwide during the first half of 2022, with manufacturing hubs Guanajuato and Nuevo León reporting the greatest increase in incidence.

The states of Mexico and Puebla, both part of the Central/Bajío region, account for roughly 70% of all incidents of road cargo theft, whereas automotive components account for more than one-third of all stolen rail cargo. Although criminal hotspots are likely to vary during the next decade in response to security force deployments and regional criminal dynamics, national levels of criminal activity are likely to remain elevated.

Besides Mexico, the U.S. has considered more than a dozen countries as strategic partners for supply chain resilience. Out of those, Mexico is one of only two countries located in the Western hemisphere, the other being Canada. Mexico’s geographical advantage should become more relevant if U.S. security concerns in the East and Southeast Asian Pacific Rim deteriorate over the next decade.

Mexico seems a particularly strong fit for the critical minerals and rare earth elements sector. As of 2020, the U.S. Department of Defense identified 58 strategic and critical minerals for which the country was import-reliant. Mexico has opportunities to carve out a bigger, and more profitable, role for itself as the U.S. seeks to shore up its supplies of these minerals. Mexico is among the top three suppliers for 14 of these minerals—and its largest supplier for fluorspar, strontium, and gold.

Mexican production of most of these minerals has risen in the past five years. That gives Mexico the ability to increase its market share of U.S. imports, particularly minerals that the U.S. currently relies on mainland China for, such as graphite, lead, and selenium. Mexican production of some of these minerals can be integrated into other critical supply chains, such as bismuth for pharmaceutical ingredients and graphite for semiconductor manufacturing.

The mining sector, however, does face risk threats including organized criminal activity, civil unrest, and contract concerns. Of these, only contract risks are likely to diminish in the five-year outlook, once current President Andrés Manuel López Obrador (AMLO) leaves office in 2024.

Mexico's exploitation of its lithium reserves is underdeveloped versus other Latin American peers like Argentina or Chile. In April 2022, Mexico approved legislation to ban private lithium mining and processing activities and reserve such activity for the state. AMLO has pledged to honor lithium concessions granted before the passage of this legislation. The government's strategy so far is limited to the creation of a state-owned firm.

If AMLO's Morena Party retains power beyond 2024, the policy direction for lithium will almost certainly remain on its current state-oriented path. Although opportunities for international companies to mine lithium in Mexico would remain closed, there are still lithium-related opportunities at other stages of the high-capacity batteries supply chain, such as refinement and battery cell manufacturing.

Beyond the five-year outlook, as Mexico becomes a lithium producer, even if a state-owned company mines and refines the metal, incentives for high-capacity battery manufacturers and end-use product manufacturers to build a domestic supply chain to serve the U.S. market are highly likely to increase.

Two key considerations that companies need to evaluate before moving operations to Mexico are infrastructure and labor.

Although Mexico’s standing infrastructure compares positively to other Latin American peers, a significant decline in infrastructure investment could hinder the full materialization of the opportunities posed by nearshoring.

Infrastructure investment is also a political issue. The current government policy has tried to encourage increasing investment in the southern states in Mexico, which are the poorest and the least well-connected. Three out of the four government flagship infrastructure projects under AMLO are being developed in this region—including a Trans-Oceanic Corridor that aims to boost the industrial and logistics capacities of the southern states. However, most foreign direct investment goes either to the Mexican states bordering the U.S. or the central part of Mexico, an important manufacturing hub, particularly for the automotive and electronics industries. For the next five years, this misalignment between where investors want to put their money and where the government wants them to invest is likely to persist.

Another consideration for nearshoring operations is the cost of production, and labor plays a large role in that. In Mexico, manufacturing wages are on average just under $4 an hour (see Figure 1), compared with $30 an hour in the U.S. 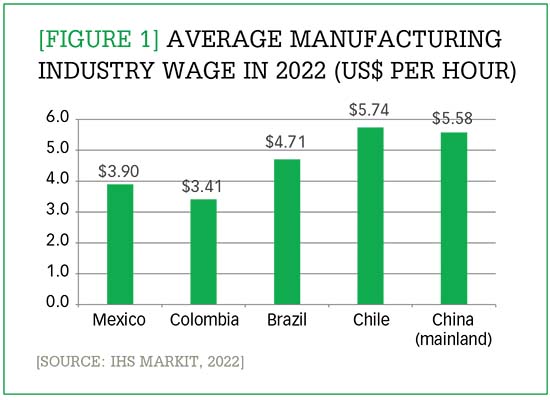 Mexico has had a period of sustained wage growth that has outpaced inflation. For example, in 2022, there was a 20% increase in the minimum wage, which supports the domestic economy. The government has also approved pension reforms that will increase employer contributions, which will in turn raise the cost of operations. Still, that could lead some firms to look at other Latin American countries for nearshoring opportunities.

Another significant issue is the availability of labor. Mexico has about 59 million people in the labor force, and about 7 million people who are available and not yet actively participating. While there is not excess supply, there is an ample amount to meet demand. Mexico also has a population that is still growing, although that growth is starting to slow.

The outlook for Mexico in the next five years could be bright, but operational, security, and policy risks impose significant constraints to firms considering massive relocations to serve the U.S. market from a nearby location with relatively low labor costs and favorable transportation logistics. Elections scheduled for July 2024 will likely improve the business environment, as whoever succeeds AMLO is likely to wield power more observant of institutional constraints. This in turn will improve the investment and economic outlook. However, operational and security risks are likely to remain constant over the next five years. In the near term, we expect reshoring to happen, albeit at moderate rates.