We use cookies to provide you with a better experience. By continuing to browse the site you are agreeing to our use of cookies in accordance with our Cookie Policy.
Home » Still booming
WAREHOUSING

In spite of a hiccup from bellwether company Amazon and increasing global and local challenges, warehousing remains one of the hottest sectors in the U.S.

In May of 2022, e-commerce giant Amazon—the company that rewrote the “rules of the road” when it comes to warehousing—announced it was losing billions of dollars due to a drop in e-commerce sales and an overabundance of warehouses. Amazon’s online sales declined 3% during the most recent 2022 quarter, as shoppers relied less on the company with the decline of the Omicron variant signaling a possible turning point in the pandemic.

As a result, the company plans to shrink its national warehousing footprint. Over the past few months, Amazon has canceled plans for nearly 10 million square feet of warehouse space, shelving plans for more than a dozen fulfillment centers and delivery facilities around the U.S. as the company wrestles with a costly space glut.

Amazon’s rightsizing of its capacity to a more normalized post-pandemic pattern of demand is significant, especially for those local markets shut out of the new jobs and tax ratables that would have come from the new facilities. However, Amazon’s catching its breath is no more than a drop in the ocean when it comes to sizing up the overall U.S. warehousing landscape. On the national level, warehousing continues to soar and is by far the hottest sector of the U.S. commercial real estate market.

Vacancy rates for warehouses and distribution centers are at all-time lows across the board, and demand for space is continuing to climb. By 2025, the U.S. will need an additional 335 million square feet of warehousing space just to handle the increase in online ordering over these next 36 months.1 Warehouse demand from brick-and-mortar retailers, third-party logistics firms, and others will generate a need for another 660 million square feet of distribution space.

The increased demand for warehouse space is pushing up rents in markets coast to coast. The national average asking rent in the second quarter of 2022 reached $6.96 per square foot, up 17% from a year ago. Warehousing hubs like the Inland Empire and Northern and Central New Jersey have long surpassed the $10.00-per-square-foot benchmark and are now at unheard of highs of $16.69, $13.85, and $12.61 per square foot, respectively. (See Figure 1.) 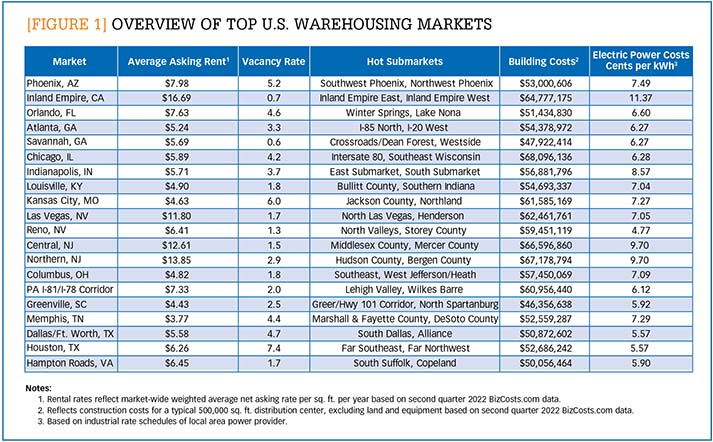 Signaling that demand will remain strong throughout the year, over 70% of newly constructed warehouse space is being delivered pre-leased. One bright sign on the supply side is that the pipeline of new construction will start hitting the market at a faster pace as pandemic-related shortages of steel, concrete, and lumber should ease in the coming quarters.

The past few years can be summed up by the expression, “the global supply chain sneezes, U.S. warehousing catches pneumonia.” Never have offshore events impacted the U.S. supply chain like they are now. We are going on three years from the start of the pandemic, and the global supply chain continues to unravel. Beyond the early COVID lockdowns, our warehousing clients are now dealing with the war in Ukraine, spiking wages in China, soaring fuel and ocean freight costs, growing protectionism policies discouraging cross-border commerce, labor shortages from “the Great Resignation,” unpredictable lockdowns in Chinese ports and industrial hubs, computer chip shortages, and U.S. inflation at a 40-year high. The cost of shipping a container to the U.S. is now almost 10 times higher than pre-pandemic levels. Transporting goods from China can now takes as many as 80 days, compared to half that prior to the pandemic.

Our warehousing clients are reacting to these world events as best they can and in several different ways. First and foremost, there is a fast-tracking of reshoring manufacturing operations back to the U.S. as seen by leading industrial firms like Ford, GM, Boeing, Lockheed Martin, Caterpillar, and Micron, to name just a few.

Foreign firms are also making major brick-and-mortar investments here in the States in order to avoid global supply chain bottlenecks and better serve the huge U.S. market. Examples include our client Tritium, which will be producing and warehousing fast-charging stations for the electric vehicle market in Tennessee, rather than in its home country of Australia. Other foreign direct investments include Samsung in Texas, Toyota in North Carolina, Kia in Georgia, Airbus in Alabama, and TSMC, the Taiwanese chipmaking giant, in Arizona.

We also anticipate near-shoring to accelerate as companies opt to establish production facilities in areas proximate to the U.S., such as Mexico, Canada, and the Caribbean. We are also seeing the end of the decades-long love affair with just-in-time inventory in favor of a just-in-case approach requiring larger, closer, and more warehouses. Clients are also increasing their total number of vendors as well as where they source from geographically in order to spread the risk of any supply chain disruptions.

At the same time that our warehousing clients are trying to respond to the effects of global supply chain shocks, many are also facing pressure from local “not in my backyard” (NIMBY) groups. Our clients in the manufacturing sector have faced anti-growth pressures from NIMBY groups for many years. Their objections often centered around noise, pollutants, and smelly, dangerous emissions. What is fueling the NIMBY movement against our warehousing clients is a bit different in nature and centered more on the sheer size and speed of the sector’s expansion and proliferation. This fast pace of change and the overpowering size of many of these new warehouses—1 million square feet is becoming common—is unsettling to many.

Also, our warehousing clients are finding that it is not just retired baby boomers with time on their hands walking the picket lines and showing up at zoning board meetings. As more and more last-mile and micro-fulfillment centers go into urban enclaves, residents in many of the lower income communities are a doubling down on NIMBYism—driven by concerns about displacement, rising real estate prices, and gentrification of the neighborhoods.

The epicenter of warehouse NIMBYism is in Southern California, especially the Inland Empire communities that have been the poster children of the explosion of e-commerce and warehousing. But it is by no means limited to there. Arvada, Colorado, killed an Amazon warehouse due to wildlife concerns. In rural Virginia, the community of Brown Grove delayed the construction of a warehouse for grocery retailer Wegmans for over two years, arguing it negatively impacted forested wetlands. In Pompano Beach, Florida, a major developer is facing fierce NIMBY protests about his proposed warehouse near its famous racetrack site.

Meanwhile concerns about stormwater runoff is the major narrative being used by the NIMBY movement in the Millstone River Basin in Central New Jersey—home to millions of square feet of warehousing in Cranbury, Robbinsville, and the popular Exit 8-A area of the New Jersey Turnpike.

If it is not enough for our warehousing clients to be up against local, grass roots protesters, a new ally of the NIMBY movement has recently emerged in the form of the International Brotherhood of Teamsters. In trend-setting California, the union claims to have stopped or delayed Amazon facilities in Gilroy, Fremont, Hayward, San Jose, and Santa Rosa. The Teamsters have also joined NIMBY forces against Amazon in Colorado and Indiana. In New Jersey, the Teamsters joined with environmentalists and North Jersey politicians to help nix a new Amazon logistic hub at Newark Liberty Airport. Amazon would have spent $125 million to redevelop two antiquated buildings into a new state-of-the-art air cargo facility creating 1,000 jobs.

In response to many of the challenges mentioned above, more and more companies are turning to automation. The pace of automation in warehousing is off the charts, and the rationales for investing in robotics are likewise growing. North American companies began 2022 by purchasing the most robots ever in a single quarter, with 11,595 robots sold at a value of $646 million, according to the Association for Advancing Automation. These first quarter 2022 numbers represent a growth of 43% over the previous year.

Why robots? The reasons are growing well beyond mere efficiencies and cost savings.  Robots don’t get COVID, don’t take time off, and don’t require expensive health plans. The “Great Resignation” has forced many warehouses to pay unsustainable startup wages and bonuses, with hourly rates beginning as high as $25 per hour. Robots are also being rationalized by an unlikely voice, that of progressives pointing to ESG and social impact imperatives. ESG stands for “environmental, social, and governance” and refers to the three key factors when measuring the sustainability and ethical impact of an investment in a business or company.

Environmentally, robots don’t require large, paved parking lots and don’t add to traffic congestion, auto emissions, and stormwater runoff. Robots also don’t take bathroom breaks using flush toilets that can strain public utility systems like workers do. They also do not require as much air conditioning as people do. As a result, the facility can be more energy efficient and reduce a company’s carbon footprint. On the real estate side of the equation, automation often allows the warehouse to have a smaller floorplan, helping to address the growing shortage of suitable warehousing sites, especially in urban areas.

Robots can also alleviate some NIMBY concerns, especially in last-mile facilities in city neighborhoods. In Milford, Massachusetts, NIMBY complaints about an Amazon delivery station included workers smoking, urinating behind hedges, and excessive commuter traffic jams in the once-quiet residential streets. All bad traits you won’t see in a robot … at least this generation of robots.

Distribution warehousing continues to be one of the hottest sectors of the supply chain—indeed one of the hottest sectors of our national economy, now accounting for almost 15% of gross domestic product (GDP). Based on our firm’s six decades of experience in the field, I am confident today’s supply chain challenges will be met and overcome by the industry’s best and brightest. I have no doubt the supply chain sector will rise to greater heights and take on an even greater significance within our national economy in the days ahead.

1. These figures are based on research and analysis performed by The Boyd Co.’s BizCost unit, which creates reports on the cost of doing business.