We use cookies to provide you with a better experience. By continuing to browse the site you are agreeing to our use of cookies in accordance with our Cookie Policy.
Home » Ocean shipping losses decline, but industry faces emerging risks

The ocean shipping industry continued its long-term positive safety trend over the past year, but global economic and political forces are posing challenges worldwide, according to the Safety & Shipping Review 2022 from insurance provider and consultant Allianz Global Corporate & Specialty SE.

Released this week, the report found that shipping losses are down considerably in the past decade, and are less than half of what they were in the 1990s. A shipping “loss” means that a vessel is lost–either sunk or destroyed, or that the cost of repairing it is too expensive to undertake–and an “incident” means a vessel is likely to be able to be used again after it has been repaired. There were 54 total losses of vessels reported globally in 2021, down from 65 a year earlier, and marking a 57% decline over 10 years, according to the report. At the same time, the global fleet of vessels has increased–from 80,000 ships 30 years ago to 130,000 today–reflecting an increased focus on safety and training, as well as improved ship design, technology, and regulation, according to the report.

“The shipping sector has demonstrated tremendous resilience through stormy seas in recent years, as evidenced by the boom we see in several parts of the industry today,” Captain Rahul Khanna, global head of marine risk consulting at AGCS, said in a press release Monday. “Total losses are at record lows—around 50 to 75 a year over the last four years compared with 200+ annually in the 1990s.”

Although total losses are down, the number of reported shipping incidents rose last year. The British Isles saw the highest number, with 668 out of 3,000, according to the report. Machinery damage accounted for more than one-in-three incidents globally (1,311), followed by collision (222) and fires (178), with the number of fires increasing by almost 10%.

The industry faces other challenges as well. Geopolitical issues such as the Russia-Ukraine crisis are exacerbating supply chain delays and disruptions caused by the Covid-19 pandemic, as one example.

“The shipping industry has been affected on multiple fronts by Russia’s invasion of Ukraine, with the loss of life and vessels in the Black Sea, disruption to trade, and the growing burden of sanctions,” according to the report. “It also faces challenges to day-to-day operations, with knock-on effects for crew, the cost and availability of bunker fuel, and the potential for growing cyber risk.”

The industry’s attempts to deal with increased shipping demands are also creating challenges, according to Allianz researchers. In some cases, companies are changing the use of vessels or extending their working life to address capacity issues, which can create safety problems.

“The economic rebound from Covid-19 lockdowns has created a boom time for shipping, with record increases in charter and freight rates. While this is a positive for shipping companies, higher freight rates and a shortage of container ship capacity are tempting some operators to use bulk carriers, or consider converting tankers, to transport containers,” the report’s authors wrote. “The use of non-container vessels to carry containers raises questions around stability, firefighting capabilities, and securing cargo. Bulk carriers are not designed to carry containers, which could impact their maneuvering characteristics in bad weather, and crew may not be able to respond appropriately in an incident.”

Fires are one of the biggest problems. There have been more than 70 reported fires on container ships alone in the past five years, the report notes. Those fires often start in containers, which can be the result of non- or mis-declaration of hazardous cargo, such as chemicals and batteries. Allianz estimates that around 5% of containers shipped may consist of undeclared dangerous goods. This is especially risky on large ships.

“Fires on large vessels can spread quickly and be difficult to control, often resulting in the crew abandoning ship, which can significantly increase the final cost of an incident,” according to the report. 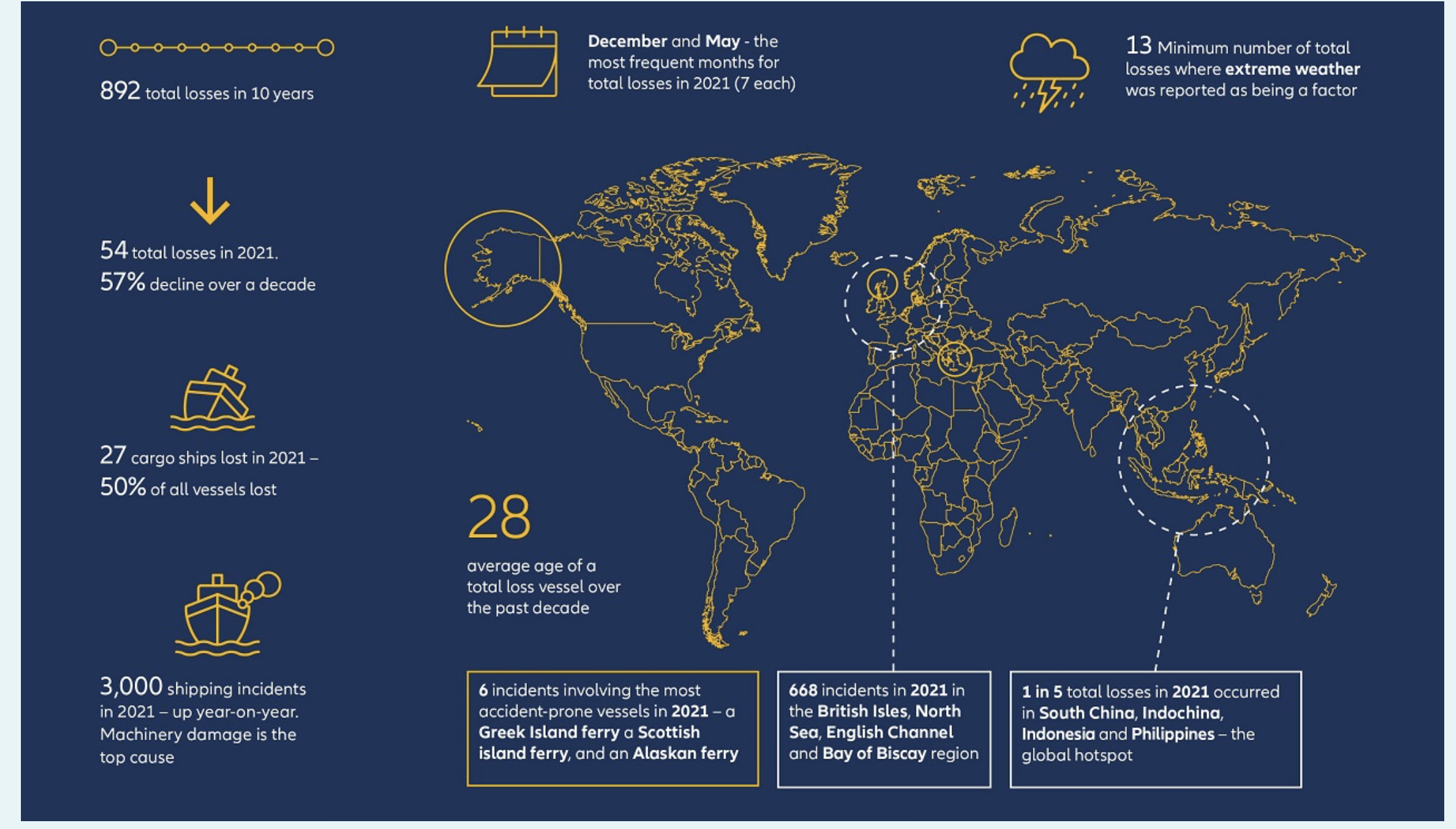