We use cookies to provide you with a better experience. By continuing to browse the site you are agreeing to our use of cookies in accordance with our Cookie Policy.
Home » Logistics industry growth slows in April

The logistics economy continued to grow in April, although at its slowest pace in 14 months, driven by a shift in transportation sector metrics, according to the latest Logistics Manger’s Index (LMI) report, released today.

The LMI registered 69.7 in April, down 6.5 points compared to March’s all-time high reading of 75.2 and falling below the 70-point mark for the first time since January 2021. An LMI reading above 50 indicates industry expansion, and a reading below 50 indicates contraction. Sustained readings above 70 indicate considerable growth in the industry.

“In general, what we’re really seeing is a move toward moderation. We’re actually slowing down to a sustainable speed,” Rogers said, adding that the lengthy contraction in transportation capacity was unsustainable, and that a market shift was inevitable. “The last time [transportation capacity] grew was May of 2020. That’s almost two years of contraction in capacity. And now, we again have growth–not an outrageous rate of growth, but growth [nonetheless]. It seems like we’re making a shift. We knew things would flip, and they did in April.”

The 12-month outlook calls for more moderate growth ahead. The LMI’s future predictions index registered 67.8 in April, down from 70.2 in March. 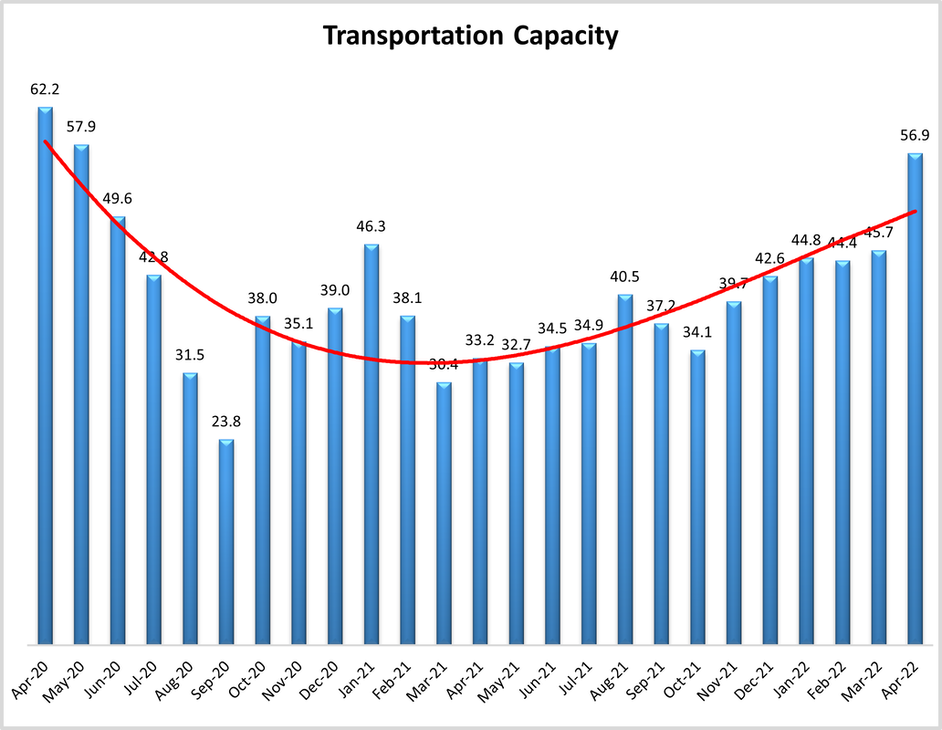 Logistics Strategy
KEYWORDS LMI - Logistics Managers' Index
Victoria Kickham, an editor at large for Supply Chain Quarterly, started her career as a newspaper reporter in the Boston area before moving into B2B journalism. She has covered manufacturing, distribution and supply chain issues for a variety of publications in the industrial and electronics sectors, and now writes about everything from forklift batteries to omnichannel business trends for Supply Chain Quarterly's sister publication, DC Velocity.