We use cookies to provide you with a better experience. By continuing to browse the site you are agreeing to our use of cookies in accordance with our Cookie Policy.
Home » Logistics economy grew in March

Strong demand for warehousing and transportation continues, but inflation and rising fuel costs may cause market shift in the coming months, researchers say.

The logistics economy expanded in March, continuing the industry’s strong growth run, but rising fuel prices and near-record level inflation may signal a shift in the coming months, according to the monthly Logistics Manager’s Index (LMI) report, released today.

The March LMI was up one percentage point compared to February, reaching an all-time high of 76.2 and maintaining a nearly two-year streak of above-average growth. An LMI reading above 50 indicates growth in the industry, and a reading below 50 indicates contraction. The LMI has remained above the 60-point mark since June of 2020 and has been above 70 since February 2021.

Transportation prices were up slightly compared to February, and transportation capacity continued to contract overall, indicating an ongoing imbalance in freight markets—but the LMI researchers said there were signs conditions may be easing in some markets. Upstream firms–including carriers, third-party logistics services (3PL) providers, and wholesalers–reported an increase in capacity during the second half of the month, potentially indicating a coming shift in the market, according to LMI researcher Zac Rogers, assistant professor of supply chain management at Colorado State University.

“It’s interesting to see how capacity loosened up in the second half of the month,” Rogers said, pointing to a transportation capacity reading of 55 for upstream firms during the last two weeks of March. “Certainly, we’re seeing some kind of shift.”

Rising fuel prices are largely the reason. A gallon of diesel fuel reached a record high average of $5.25 in mid-March, and the price of a gallon of regular gasoline surpassed $4 for the first time since 2008. Combined with near-record high U.S. inflation rates and a changing consumer economy, those factors may alter the logistics landscape later this year.

“The high costs of fuel may end up being the thing that finally slows down the runaway transportation market,” according to the LMI report. “The dramatic increase in fuel prices … seem to have put a relative damper on the previously insatiable freight demand. Consumers had been willing to absorb some increase in costs through 2021. However, the rate of inflation through the first quarter of 2022 is at such a rapid pace, the stimulus money that buoyed spending last year is largely gone, and consumer spending has shifted increasingly away from goods and towards services.”

The changing landscape may lead to a rebalancing of the freight market as the year unfolds, Rogers said.

“We may see some moderation in trucking,” he explained. “Prices are still going to be up, capacity will be tight, but not impossibly so [as we’ve seen recently].” Other industry watchers agree that the pain of high costs is here for the long term. Brett Wetzel, a senior director at transportation management solutions firm Breakthrough , says it’s increasingly difficult for shippers and carriers to manage the current fuel market volatility in particular–a factor that drives up costs throughout the channel. Fuel is the second-largest operating cost for trucking companies–after driver costs—and when those costs rise considerably, they get passed along to shippers when goods are moved, he said. “Rapid volatility adds cost to both [parties], and it creates a big challenge,” Wetzel said. “We expect continued pressure through 2022. We may see some relief in 2023, but we still won’t be back to 2021 [levels].” Respondents to the March LMI report predicted that transportation prices, warehousing prices, and inventory costs will all continue to rise over the next 12 months. 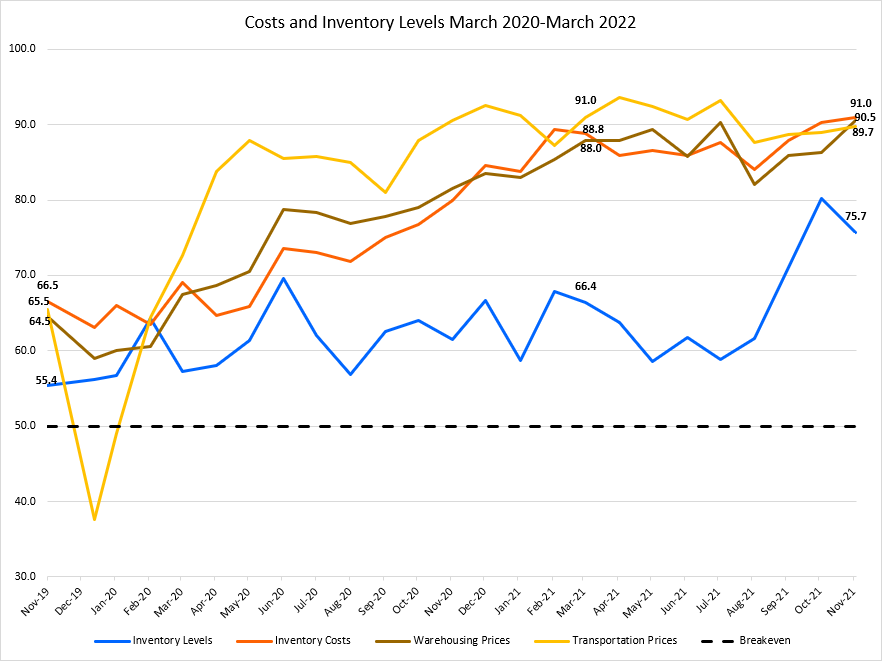 This story was updated with additional information on April 7.