We use cookies to provide you with a better experience. By continuing to browse the site you are agreeing to our use of cookies in accordance with our Cookie Policy.
Home » A good time to make a deal

A good time to make a deal

Despite a challenging economy and uncertainty about future business conditions, the outlook for container shipping volumes remains surprisingly positive. Several major trends in the shipping industry, however, should compel shippers to re-evaluate the rates that they are paying ocean carriers.

Currently, we are seeing overcapacity in the global fleet and fierce competition on major trade routes. These two trends, which are putting downward pressure on rates, are tempered somewhat by consolidation in the industry and the fact that a few of the largest carriers are dominating key lanes with large vessels. Overall, however, these dynamics present opportunities for shippers to reduce costs. Shippers can use the overcapacity and increased competition to their advantage, taking the time to diversify their portfolio of carriers and thus avoid becoming captive to the largest global shipping lines. 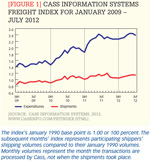 More capacity, lower rates
Overcapacity in the global container-ship fleet tips the supply/demand balance in shippers' favor. According to the World Trade Organization and the International Monetary Fund, the value of world trade is expected to grow by 19 percent from 2011 to 2014, to $19.3 trillion. That represents an increase of nearly 90 percent from 2005. Over the same period, maritime analysts say, the container fleet will expand to a capacity of 19.3 million twenty-foot equivalent units (TEUs)—a 24-percent increase from today's fleet size. From 2005 to 2014, the global container vessel fleet will have expanded disproportionately relative to trade value by as much as 144 percent. For every two containers of predicted trade growth, nearly three slots will be available on ships. There is also significant shipyard overcapacity globally, and prices for new ships are very low, indicating that this trend toward excess carrier capacity will continue.

As a result of this increase in capacity, prices dropped, leading to cutthroat competition for volumes among carriers on key trading routes. Recently carriers have tried to manage their capacity, and spot prices on major routes rose rapidly in the first half of 2012. Most shippers, however, have managed to keep their contract rates at the 2011 levels, according to reports from Drewry Shipping Consultants Ltd.

The most striking example of the rapid fall in rates in 2011 can be seen in shipments from Southern China to Northern Europe. At the start of 2010, the average cost of shipping a 40-foot container from Hong Kong to Hamburg was $4,830; by August 2011, those rates had dropped by 59 percent, according to Drewry (see Figure 1). Despite their rise earlier this year, spot rates on this lane remain 24 percent below the 2010 high.

Rates on other trade lanes—such as between Southern China and the U.S. West Coast—have behaved similarly, albeit less dramatically, as illustrated in Figure 1. In the commodity-like container shipping business, price remains the key differentiator, and the supply-demand imbalance favors shippers that are able to negotiate longer-term contracts.

The industry is also becoming more consolidated, with the leading carriers increasing their scale and dominating key lanes. Although the overall industry remains relatively fragmented, the top five players now own 45 percent of market share, up from 35 percent in 2004, according to the research firm Alphaliner.

Consolidation is likely to continue for several reasons. Persistent overcapacity during a period of little economic growth has weakened some operators, making them potential acquisition targets. The move toward "megaships" of more than 12,000 TEUs, moreover, favors larger operators that are able to exploit economies of scale. Large carriers are also continuing to expand their portfolios, serving multiple markets with global networks. Such diversification allows them to soften the impact of poor returns on particular routes with revenue from other markets that perform well.

Despite the trend toward fewer, larger carriers, opportunities do exist for shippers to successfully work with smaller carriers that align well with their supply chain network. Those opportunities are likely to multiply as the big, global carriers rely more on megaships on some routes. Although megaships provide major economic advantages in terms of fuel, capital, and manpower costs per container, these ships have limitations. In order to achieve high utilization, large vessels operate between a limited number of ports, and they must be supported by a dense network of feeder services that requires multiple handling of containers. Nimble carriers operating smaller vessels may be able to achieve lower costs on a point-to-point basis than the "market leaders" by calling directly at ports not served by the megaships, thus eliminating extra handling of containers.

Diversify your portfolio
Given these trends, now is a good time for shippers to re-evaluate the ocean freight portion of their supply chains to take advantage of current dynamics and position themselves for the future. Shippers should take advantage of the supply/demand shift that is driving down rates even on traditionally high-demand trade lanes. They should also look for opportunities to diversify their portfolio of carriers to include smaller, more nimble shipping lines with competitive point-to-point service.

The combination of volatile financial markets, continued turbulence in the euro zone, and stagnating growth in the United States presents a daunting challenge for most companies, particularly those with global supply chains. By understanding the current dynamics in shipping, however, supply chain professionals can find opportunities to both drive down the cost and increase the competitiveness of their operations.