We use cookies to provide you with a better experience. By continuing to browse the site you are agreeing to our use of cookies in accordance with our Cookie Policy.
Home » Companies shift IT priorities, put greater focus on emerging tech

87% of companies are rethinking IT investments for 2022 and beyond due to shifts in consumer spending and market uncertainty, survey shows.

More companies are shifting their information technology priorities in response to changing consumer spending habits and market uncertainty, according to a recent report from enterprise analytics software provider Teradata. The report surveyed IT decision-makers from companies around the world to determine where they are focusing their IT investments in the year ahead.

Market volatility, emerging tech, and cloud readiness are top priorities, according to the respondents, who work for companies with 1,000 or more employees in a variety of industries, including manufacturing, retail, distribution, and transportation.

In the wake of the pandemic’s economic impact, 87% of companies said they are rethinking IT investments for 2022 and beyond, “mainly due to the recent, significant shifts in consumer spending and market uncertainty,” according to the report. More than 90% of respondents said that re-evaluating their IT investments, modernizing cloud architecture, and improving data management and analytics were among the top investment areas required to accelerate their digital transformation efforts, for example.

Respondents also identified a range of emergent technologies as critical areas for future spending, including multi-cloud infrastructure, IoT, 5G, edge computing, AI, and data analytics. This was a globally held view, according to the report’s authors, with IT leaders from the United States, Europe, and the Asia Pacific/Japan regions citing emerging technologies as a top investment priority: 90% of respondents said emergent technologies, such as automation, would have a transformational impact on their organization in the next three years, and three out of four IT decision-makers agreed that their organization’s digital transformation efforts or lack thereof could be a roadblock to realizing the full benefits of key emergent technologies, such as AI and machine learning.

Companies are also grappling with how quickly they are making their leap to the cloud. More than 80% expressed concerns that “not being cloud-ready” could be a considerable barrier to accelerating their digital transformation efforts.

“Today, organizations understand that they must leverage key emerging technologies such as AI and multi-cloud infrastructure to maintain a competitive advantage. In fact, 87% of IT decision-makers felt they would be at risk of lagging behind the competition if they didn’t,” Steve McMillan, president and CEO of Teradata, said in a statement announcing the release of the report. “To realize their full potential, companies must modernize their architectures to leverage the cloud and dial-up investments in other emerging technologies initiatives, like achieving AI at scale or leveraging the intelligent edge. In doing so, they can combine new innovative sources of data with their own to gain the necessary insights to pivot on a dime and continue to fuel innovation at scale.” 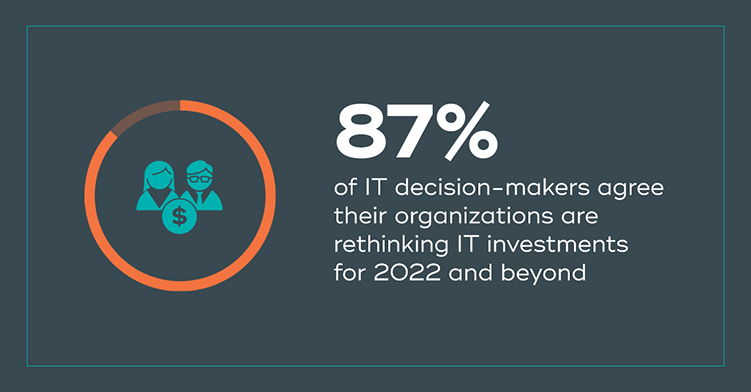