We use cookies to provide you with a better experience. By continuing to browse the site you are agreeing to our use of cookies in accordance with our Cookie Policy.
Home » Welcome to the jungle
OCEAN

Welcome to the jungle

Driven by an unexpected surge in consumer demand, global containerized trade volumes are expected to end the year 2021 with an annual growth of approximately 10%. On the Transpacific Eastbound trade lane (from East Asia to North America), trade growth is even more pronounced. At the time of this writing in July, Drewry measured annual trade growth of about 30%, while the Port of Los Angeles reported a year-to-date volume growth of 44% for the first half of 2021. This growth in trade is leading to vessel utilization levels on the Transpacific Eastbound trade of above 100% and spot freight rates higher than $10,000 per 40-foot container.

The global containership fleet has not able to grow fast enough to meet this demand. Instead, effective capacity is being dragged down by reductions in equipment productivity and terminal productivity.

While there has been a surge in orders for new vessels since the second half of 2020, the new orders aren’t expected to join the fleet until the start of 2023. At that point, the market may be at risk of seeing a return of overcapacity. However, future supply requirements are heavily clouded by new environmental regulations that are due to become law at the start of 2023. These regulations might cause significant chunks of the containership fleet to slow down in order to comply.

As a result, Drewry is not optimistic about a solution being found to fix the supply chain disruption in the short term and thinks the market is facing medium-term (or extended) under-supply while it remains caught in the following “Catch-22” situation:

At the same time, the container shipping ecosystem remains fragile and stretched thin. For example, a COVID-19 outbreak in May caused serious delays at the South China port of Yantian and knock-on congestion at other nearby ports in Asia. Likewise, many global operations were hobbled when the Ever Given containership blocked the Suez Canal for six days in March. These incidents demonstrated just how challenging it is to build more resilience into the global supply chain.

In spite of these operational disruptions, shipping lines are set to have a banner year. Over the last decade, these companies barely earned their cost of capital. This year, however, supply shortages have ripped through the global maritime container distribution system like a bullwhip, and carriers have used this circumstance as a reason to let higher paying cargo “crowd out” lower paying cargo.

With spot rates changing weekly (and on some trades even twice weekly), this crowding-out effect has resulted in a tripling and quadrupling of average freight rates in less than 12 months. Five-digit freight rates emerged on the Transpacific Eastbound and the Asia/Europe trades (see Figure 1). From there, the secondary and backhaul trades were also affected, as shippers on those lanes had to pay “competitive” freight rates to get access to scarce container equipment. Consequently, 2021 will be the first year in the history of container shipping that carrier profits approach $100 billion and global average freight rates jump by 50%. 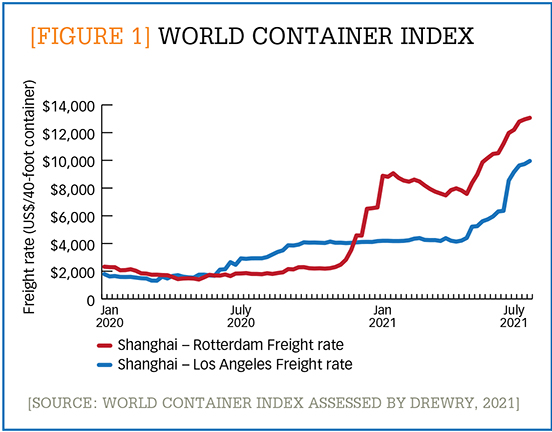 The ocean transport market is now the most under-supplied it has been over the past 30 years. As a result, beneficial cargo owners (BCOs) are at risk not only of seeing their costs shoot up but also of failing to meet their commercial commitments or get their products “on the shelves” in stores.

With freight rates often 400% higher compared to the year before, one could (foolishly) expect service delivery from carriers to be impeccable. Unfortunately, however, terminal congestion is causing high frequencies of long vessel delays and increased uncertainty in inbound supply chains’ lead times. These circumstances are, in turn, leading to increased inventory requirements. Vessel “on-time performance” levels reached unprecedented lows during 2021 with less than 50% of Transpacific Eastbound sailings arriving within 24 hours of the estimated time of arrival.

For many importers and exporters, the shortage of ocean transport capacity has caused a shift in priorities away from controlling cost and service and toward securing access to capacity at origin to safeguard their customer relationships at destination. Unfortunately, the operating processes and technological tools they are using are often not designed for this priority, and hence provide a poor fit for this new environment. As a result, many in-house logistics teams are seeing their productivity levels collapse.

To bid or not to bid?

Due to the crowding-out phenomenon, BCOs are now reporting that contracts “are not worth the paper they’re written on.” Given the limited benefit that ocean contracts currently provide, procurement teams and logistics executives could (and frankly should) be wondering whether it is even worth running the annual contract processes. In Drewry’s experience, however, securing new ocean contracts does help BCOs avoid the even more expensive spot market and provides at least some form of volume commitment. That said, shippers should be aware that Drewry has been seeing some changes in carrier behavior during the bidding process, such as:

Shippers are also experiencing less favorable payment terms and free time (the time allotted for picking up containers), lower bidder data quality, and an apparent lack of staff resources among the bidders. Some shippers are responding by trying to position themselves as a “shipper of choice” for the providers, while others are themselves struggling to find resources to run a bid.

BCOs need to think about tactics and strategies to diversify their maritime supply chain and mitigate potential disruptions. Using benchmarks and forecasts, best-practice processes, and best-in-class request for proof (RFP) software can all help. Here are some more suggestions:

Exporters and importers that take such actions have a better chance of retaining or regaining the best possible level of control over the total cost of ownership of their ocean shipments.