We use cookies to provide you with a better experience. By continuing to browse the site you are agreeing to our use of cookies in accordance with our Cookie Policy.
Home » Service struggles continue
RAIL

Congestion and disruption are becoming the new normal for the rail industry as providers scramble to respond to surging demand.

As the United States economy strives to emerge from the pandemic, shippers have turned increasingly to carload and intermodal rail service to help find capacity to move freight. However, the rail industry continues to grapple with service struggles that began earlier this year during February’s winter weather woes.

On a networkwide basis, intermodal train velocity is below each of the last two years and the five-year average. While overall velocity has fared somewhat better, it continues to languish near the levels it plumbed in the immediate aftermath of February’s weather-related issues.

This has created some friction between carriers and shippers, as demand for capacity remains high coming out of the pandemic. Import volumes, for example, have remained strong since the end of last year and will likely remain so into 2022. Coupled with a tight truck market, this means a positive outlook for demand for intermodal rail services.

With active truck utilization expected to be near 100% for the next several months, shippers will have little alternative but to find capacity on the rail network. As a result, intermodal rates have increased into the mid double-digits over the summer months, compared with 2020 levels. Although rates are expected to lessen into the late third and early fourth quarters, they are still anticipated to be in the mid-single digits above last year’s level for the same month.

The tight truck market and ongoing strong imports have pushed FTR’s Intermodal Competitive Index to low double-digit levels (see Figure 1), indicating that intermodal is highly competitive against domestic truckload alternatives. Indeed, conditions have been strong enough to encourage a modal shift from truck to intermodal. While intermodal’s competitive advantage is likely to lessen as the second half of 2021 wears on, it is expected to remain positive. 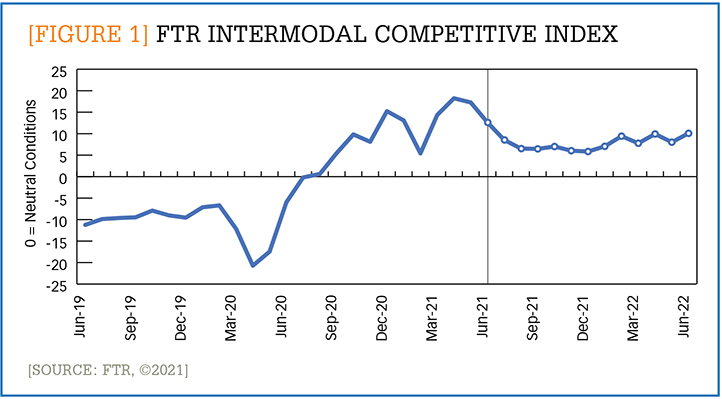 One wildcard in intermodal’s competitiveness will be whether shippers can stomach service levels below what they had become accustomed to.

Carriers on both sides of the Mississippi River have had to temporarily embargo shipments into some facilities or have declined to move certain types of freight for a period of time. One Western carrier issued an embargo that halted some movements into Chicago for a week, while another Western carrier made significant changes to its storage terms in Chicago and Los Angeles. On the other side of the Mississippi, an Eastern carrier has limited flows into several of its facilities in recent weeks, most notably its facility in the Lehigh Valley of Pennsylvania in an effort to meter traffic and enhance fluidity.

These efforts, along with ocean carriers landing containers at different ports to avoid their own congestion issues, have created a level of disruption that is hard for many shippers to tolerate. To avoid these service issues, some shippers earlier this year temporarily moved some of their domestic trailer freight volume away from the rails.

Given the tight capacity situation in competing modes, however, shippers may have to adjust to congestion and disruption as the new normal heading into their peak season.

Demand is also up for the carload market, which is positioned to have its best year of the last three from a growth-rate perspective. The increase in carload volumes, however, will add pressure on the rail network heading into the peak season. Several commodity groups, such as grain and chemicals, could experience significant surges in traffic right as the intermodal peak season ramps up.

Railroads will need to keep a particularly close eye on the automotive market heading into the second half of the year. Automotive traffic has been limited lately by the shortage of semiconductors and other parts over the last few months, but volumes should surge once parts become available, as sales are remaining strong and inventory low. Even if sales slow in the coming months, automotive volumes are likely to remain high for the next few quarters, as companies rebuild their inventories. The longer the supply disruptions continue in automotive, the more breathing room the carriers will have to add capacity and labor to their networks to handle the increasing volumes.

The automotive production increase will also produce additional volumes in other sectors that support the automotive industry, such as commodities like metals and chemicals. The metals complex, from metallic ores through finished metal products, is already performing at strong levels and could move even stronger with a full restart of automotive production.

Chemical volumes took an extended dip in February and March of this year in the immediate aftermath of the freeze and related power disruptions in Texas and other parts of the U.S. Gulf Coast. These plants are expected to try and recover that lost volume over the balance of the year, so we should see higher than normal volumes in the second half.

With volumes set to increase over the next few months heading into the peak season, shippers should expect the timeline for resolution of service issues to be pushed out even further into the future.

The extended issues are likely the result of carriers not having sufficient available labor to move the additional volumes. Carriers reduced their headcount dramatically during the pandemic last year. Some of those employees have since moved into other industries and were not interested in returning when carriers called them back. There is no short-term fix in sight, as training new people to be conductors and engineers typically takes six to nine months. As a result, shippers should not expect service to improve meaningfully for the peak season.

The continuing service concerns have also drawn the scrutiny of federal regulators, particularly as they review the proposed combination of Canadian National and Kansas City Southern. Consolidation in the railroad industry among Class I carriers has always led to some level of service disruption. While it is unlikely that the transaction will be approved by this year’s peak season, the current service backdrop could present another reason for regulators to be hesitant about granting approval.

Time will tell how the regulators will rule on the merits of the transaction, but what remains clear is that rail service issues will likely continue to be top of mind into 2022 and beyond.

Author’s Note: For more insights and to learn more about FTR’s outlook for future volumes, visit www.ftrintel.com/cscmp and download some sample reports to learn more. Todd Tranausky is vice president of rail and intermodal at FTR Transportation Intelligence.