We use cookies to provide you with a better experience. By continuing to browse the site you are agreeing to our use of cookies in accordance with our Cookie Policy.
Home » The right site, at the right price

The right site, at the right price

In today's uncertain domestic economy and with increasing global cost pressures, many companies are finding that the best way to improve the bottom line for their warehouses and distribution centers is to focus on the cost side of the ledger, not on the revenue side.

With fuel and shipping rates projected to rise significantly in 2012 and beyond, comparative costs in areas like labor, property taxes, energy, and real estate are under the site selection microscope like never before. With the exception of shipping rates, which are often negotiable, most operating costs facing the distribution warehouse planner are fixed. For many, a less-than-optimum operating cost structure for their warehouses can compromise their competitive position for years. 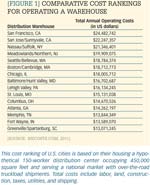 That's one reason why many companies are considering relocating warehouses and distribution centers right now. Those that are searching for sites that will help cut operating costs now and in the future are finding attractive opportunities.

Location matters
Figure 1 shows the annual BizCosts.com comparative cost ranking of U.S. cities based on their housing a hypothetical 150worker distribution center occupying 450,000 square feet and serving a national market with over-the-road truckload shipments. 1 Total costs include labor, land, construction, taxes, utilities, and shipping. They can range from a high of US $24.5 million per year in San Francisco, California, to a low of $13.1 million in the Greenville/Spartanburg area, South Carolina.

These costs are expected to rise throughout the next year. Despite continued advancements in warehouse automation technologies, overall operating costs for distribution warehousing are expected to increase by 14 to 16 percent in 2012 due to a rise in diesel fuel costs, above-average utility rate increases, and recovering real estate markets in most locales. These costs will be up from an estimated 13percent increase for 2011. Labor costs, however, will continue on the flat-toweak trajectory they have followed since 2009, with a projected increase of 2.1 percent in 2012 for nonexempt warehouse personnel.

There are many other variables that can affect the attractiveness of one location compared to another. One of the newest is cap-and-trade legislation designed to reduce carbon emissions and improve the environment. New Jersey, for example, recently opted out of the Northeast Regional Greenhouse Gas Initiative in a move to improve its competitiveness versus neighboring Pennsylvania, which is not a member. New Jersey authorities may be right to worry: Industry insiders believe the fruit and juice company Ocean Spray's recent decision to relocate its Bordentown, New Jersey, distribution facility to Pennsylvania's Lehigh Valley was in response to concerns about New Jersey's carbon program and escalating utility prices.

Another business climate variable that companies continue to monitor is the relative strength of unions in each state. "Right-to-work" status continues to be a hot-button issue for many companies involved in distribution. Right-to-work legislation restricts the power of organized labor by barring practices such as requiring union membership to work in a warehouse or factory. This can be very important for some projects, as labor costs can account for as much as 50 percent of overall warehouse operating expenses. Lower labor costs and more favorable labor/management relations tend to be found in the 22 states that have right-to-work legislation, mostly in the South and West.

Nowhere is the strength of the unions more of an issue for the supply chain field than in California, where California Bill AB 950 could effectively keep the now-dominant independent drayage trucks from working at California's major ports, including Los Angeles/Long Beach. That measure could lead to larger, possibly unionized trucking organizations controlling drayage operations between the ports and regional warehouses.

The likely result of the California legislation would be a further increase in distribution costs in that state. The rise in costs could then drive distribution projects to other markets along the I-15 and I-10 corridors, including North Las Vegas and Mesquite, Nevada; St. George, Utah; and Phoenix, Kingman, and Casa Grande, Arizona. All of these locations are in right-to-work states where land costs and industrial space are also at historic lows due to the real estate collapse in those markets.

Expanding trade attracts warehousing
Not just the domestic economy but also the global economy is having a profound effect on the location of distribution centers. The cities that are especially well-positioned to attract new distribution projects are those that link to the global economy through ports, airports, and access to NAFTA (North American Free Trade Agreement) trade corridors like the Canamex Corridor in the U.S. West and the I-35 NAFTA Superhighway, which extends from Mexico to Canada in our nation's Heartland region.

Booming north-south NAFTA trade in the manufacturing sector and a resurgent agricultural economy led by corn and ethanol are driving the logistics economies of Heartland cities along the I-35 trade route, including Omaha, Nebraska; Kansas City, Missouri; and Oklahoma City, Oklahoma. Northsouth trade, up 15 percent from last year, is expected to continue to grow as the Canadian economy outpaces that of the United States and the Canadian dollar reaches parity with its U.S. counterpart.

As the Canadian economy grows, some Canadian companies are developing a keen interest in establishing U.S.-based distribution facilities. Due to the strength of the Canadian dollar, and with U.S. real estate prices at all-time lows, the economics are very attractive for Canadian companies that are looking to set up shop in the States for the first time.

Airfreight growth also has been a positive force for a number of distribution projects, especially those close to major hubs operated by UPS in Louisville, Kentucky, and FedEx in Memphis, Tennessee. In addition, Minneapolis, Minnesota; Chicago, Illinois; and St. Louis, Missouri, have strong air cargo service to and from China, a huge plus for a growing number of companies in those areas.

A warm welcome
While the weak economic recovery and rising costs have had some negative effects on the warehousing market, they have also resulted in at least one positive consequence. It used to be that many communities were resistant to new warehousing projects and viewed them with skepticism. Now, however, communities are actively courting logistics industries because the economic benefits are clear and compelling. Indeed, for cash-strapped municipalities warehouses are a significant source of new jobs. Large warehouses on extensive acreages translate into huge property tax revenue. Other coveted revenue streams generated by a new warehouse or distribution center for the host municipality and state include sales taxes, personal property taxes, utility taxes, fuel taxes, telecommunications taxes, and personal and corporate income taxes.

As a result, state and local economic development organizations have been providing warehouse operators with access to millions of dollars in financial incentives, and communities have been warmly welcoming them. Additionally, residents of local communities are beginning to see distribution and warehouse facilities as an employer of choice. In years past, the typical warehouse labor force was dominated by lower-skilled and lower-paid material handling workers and a small clerical pool. Today's highly automated and computer-driven warehouses, however, depend on a wide range of both blue-collar employees and well-compensated white-collar employees who manage such sophisticated technologies as radio-frequency identification technology (RFID), automated storage and retrieval systems (AS/RS), mobile robotics, inventory tracking, and softwaredriven pick-and-pack systems.

Warehouses and distribution centers should continue to be seen as employers of choice, in part because an increasing number of them are opting to relocate other value-added functions to the lower-cost warehouse environment. These functions typically include final assembly and quality control, customer service, accounting, call center operations, regional sales, information technology, and other "back office" functions that traditionally are carried out at the more expensive head office or regional office location.

Endnote:
1. BizCosts is a registered trademark of The Boyd Company Inc.