We use cookies to provide you with a better experience. By continuing to browse the site you are agreeing to our use of cookies in accordance with our Cookie Policy.
Home » Alternative paths to a post-pandemic economy
MONETARY MATTERS

Alternative paths to a post-pandemic economy

What happens to the economy as the pandemic fades? It all depends on the ease of restrictions and the phase-out of keys economic supports, says IHS Markit.

The constantly developing path of the COVID-19 pandemic continues to confound economic forecasters as they try to predict what effect the pandemic will have on the economy.

Predicting the progress of the vaccination effort has been challenging enough. Optimism from the early emergency approval of the Pfizer and Moderna vaccines gave way to the challenges of manufacturing vaccines. Likewise progress on vaccine distribution has given way to concerns about new, more contagious variants.

It seems likely that the disease and the vaccine rollout will continue to drive the economy in the near term. As a result, the economic recovery will be shaped by the different containment measures and fiscal and monetary policies put in place by countries across the globe, as well as the extent of pent-up consumer demand and savings. As the impact of the pandemic ebbs and restrictions ease, economic activity will gradually return to something resembling normal.

At IHS Markit, we have analyzed different scenarios of how containment measures might be eased and the factors that would drive that loosening. This analysis has led to some sobering conclusions about the global economic outlook. Currently, we expect most economic restrictions to be fully eased by the third quarter of 2021. We looked at two scenarios, one where these restrictions are lifted early due to accelerating progress in vaccine distribution, the other where these restrictions are extended as the pandemic persists. (See Figure 1.) 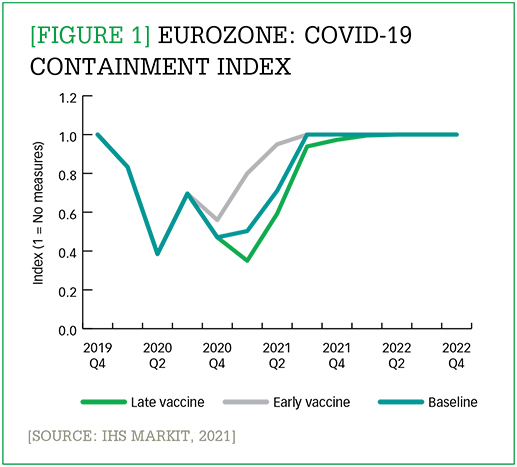 Our current baseline outlook for the vaccine campaign assumes that vaccines will be widely available and distributed by the end of Q2 in advanced economies. Access to vaccines will, however, remain limited in emerging market. The peak of cases will continue to fall through February but remain high relative to prior peaks. Distribution and manufacturing bottlenecks will be inevitable, but increasingly give way.

Major distribution or manufacturing issues may derail this view, but the risks to this view arise more from whether treatments continue to improve, whether broad one-dose vaccination is as effective as two, and vaccine hesitancy.

Our first scenario is based on the assumption that the vaccination effort will experience early successes. If efforts are successful, we expect that the rapid fall in infection rate that started in mid-January will accelerate through March and the number of cases will fall to levels well below prior peaks. If new vaccines are approved, we expect they will rapidly be put into manufacturing, and distribution will accelerate in advanced economies. If this all happens, by the end of Q2, the transmission rates and vaccine success will lead most major economies to fully reopen. As the success becomes more and more apparent, pent-up demand, fueled by accumulated savings, will drive an increase in consumer spending. Fading fiscal supports will prove to be enough to drive a surge of consumer spending.

This optimistic scenario would shift the rate of global gross domestic product (GDP) growth forward, rising from the 4.3% projected in our baseline to 5.9%. Overall global economic activity will pass the 2019 Q4 peak in the second quarter of 2021 (compared to the fourth quarter in the baseline), but the acceleration will vary widely across different regions. Europe and North America will see the fastest acceleration, with annual growth rising by 2 and 3 percentage points, respectively, in 2021. In the Asia-Pacific regions, where lockdown measures have been less severe, the upside to growth will be more muted in 2021.

The success of early vaccine distribution would mean that advanced economies would see greater growth in 2021 relative to the baseline, but that growth would slow in 2022 relative to the baseline. As vaccine distribution expands in emerging markets and advanced economy demand solidifies, economic growth in 2022 would accelerate in Latin American, Middle Eastern, and Asia-Pacific markets.

Ironically, the rapid recovery of China’s production following the initial wave of the pandemic suggests that it may not benefit as much from these gains. Further, there are indications that shifts in supply chains towards China during the pandemic may be reversing, as gains in Southeast Asia revive. Equity markets will revive, driven by the gains in consumption spending and business confidence. The revival of equity markets will lead to further acceleration of investment in advanced economies, although the gains here will be concentrated in the service sector rather than in the goods sector.

In contrast, a more protracted vaccine campaign would introduce new economic complexities. If, under this scenario, the pandemic continues to improve, but issues arise with new vaccine approvals, manufacturing, and distribution, it would hamper the success of the vaccination campaigns. More contagious variants would multiply along with continued localized outbreaks, leading authorities to prolong the restrictions on businesses.

If, however, the path of the pandemic does not change significantly and issues with distribution and manufacturing continue to hamper vaccination campaigns, then we could expect to see renewed peaks in the pandemic. Uncertainties around mutations and vaccine effectiveness would lead to further caution by authorities about loosening restrictions. The recovery would be delayed. Lack of economic progress would be sufficient to undermine demand for fiscal supports; and as those supports elapse, a wave of bankruptcies would emerge in major economies.

The delayed impact of vaccination efforts, combined with continued confinement measures, would shave nearly 4% off global growth in 2021. Full acceleration of the economy would be postponed nearly two years until 2023. Overall global activity would pass the 2019 Q4 peak only in the second quarter of 2023. North America and Europe would slip back into a recession, although a much less severe one than in 2020 Q2. Asia and Latin America would see growth slowdowns as global demand retracts. China’s growth would fall by over 3 percentage points in 2021, and the slowdown would persist with global demand. Elsewhere, the Eurozone and the United Kingdom would see growth slow between 3 and 5 points, with the impact of increasing bankruptcies pushing the growth acceleration until 2023.

Despite the slowdown in mainland China, it would still outperform other economies. This fundamental out-performance would continue to attract equity and other capital flows, along with a strengthening exchange rate. In contrast, the Eurozone and Japan would see a steady increase in the risk premiums placed on their domestic debt as concerns about rising public and private debt levels take on new urgency with the wave of bankruptcies. The U.S. would benefit from the dollar and its economy being seen as a “safe haven” in times of global economic turmoil. This would restrain the rise in interest rates in the United States, but the fall in global demand would translate into falling demand for imports.

A few insights can be drawn from this analysis. First, the distinctive path of China over the course of the pandemic means that the potential upside in growth is limited there, and the downside will be driven by demand elsewhere. Stronger demand elsewhere would also accelerate some of the supply chain shifts towards Mexico and Southeast Asia.

Second, the upside scenario is driven largely by pent-up demand in sectors where restrictions have been the most profound: in restaurants, retail, travel, and entertainment.

Third, the downside risk is much greater than the upside. Globally, policy supports have critically restrained the rise of bankruptcies and the follow-on impacts on credit and investment. The timing of the phase-out of these supports will critically affect the transition to the post-pandemic economy. Jonathan Ablett is a director in global economic modelling for the Economics and Country Risk team at research and analysis firm IHS Markit.
You must login or register in order to post a comment.