We use cookies to provide you with a better experience. By continuing to browse the site you are agreeing to our use of cookies in accordance with our Cookie Policy.
Home » COVID-19 shakes up the protein supply chain
MONETARY MATTERS

The meat and protein industry has faced major disruptions both on the supply and demand side due to the pandemic.

The COVID-19 pandemic has had some far-reaching impacts on the U.S. supply chains for meat and poultry through the first half of 2020. In addition to short-term shutdowns of processing plants due to high coronavirus infection rates in the workforce, there has also been a shift in consumption away from restaurants and other out-of-home dining to in-home meal preparation through consumer retail channels.

According to historic data on supply and demand from IHS Markit’s Transearch database of freight traffic activity, counties that had high levels of COVID-19 infection in the local workforce through June process just under 50% of the nation’s supply of protein products. These products include fresh and frozen meat and poultry as well as meat and poultry products. Nearly 15 million tons, or 17% of the truck shipments of these food items, originate in a county where there has been at least one processing plant closure due to the pandemic. Over 25 million tons, or 30% of the trucked volume of these protein products, originate in a county that reported significant levels of COVID infections amongst workers in processing plants. Each of the top 30 meat-producing states have reported plant closures, and these disruptions have flowed through the supply chain into more than 30 consuming states. Significantly, as of the end of June, some of the key southern and western producing states were reporting record overall levels of infection.

It is, however, important to note that there does not seem to be any single comprehensive and detailed tabulation of the workforce virus infection rates and plant closings. Instead we used a wide variety of publicly available resources and published media reports to develop the information used in this analysis. While the federal government and some state agencies maintain some level of pertinent information, the available data lacks sufficient detail and coverage to support a highly detailed analysis. The extent of the disruptions may be higher than this analysis shows, due to the limitations of the available source data and continued new reports of disruptions that are still appearing frequently.

In the first half of the year, at least 240 meatpacking plants, including poultry, had temporary closures, with some facilities shut down more than once. Reports showed more than 25,000 workers who had tested positive, with around 100 deaths. These statistics indicate that the industry represented the third largest “organizational cluster” of infection, exceeded only by correctional facilities and nursing homes. The first reports of problems emerged in March, and the rate accelerated significantly in April and May. As the rate of meat processing plant disruption has abated, however, other types of food processing and farming locations have reported increasing levels of infection and closure, though not yet to the extent seen in this industry.

States with significant production that have much lower levels of possible disruption were Virginia (over 2 million annual truck tons) and Alabama (over 3 million tons). Each of these states had just over 25% of their volume potentially affected. In Iowa (over 7 million tons) and Georgia (over 4 million tons), a little over one-third of the production was generated in impacted counties.

The cited tonnage figures are annual truck shipment volumes of fresh and frozen meat and poultry as well as meat and poultry products. The potential disruption was estimated based on plant closing and high infection rates in the producing counties and is only an indicator of where 2020 production may be impacted, not an estimation of the actual impact levels. This information only addresses shipment volumes and is not a commentary in any way about the potential effects of consumption of these products.

The IHS Markit Transearch data tracks annual shipment levels from producing counties to consuming counties. With this market-to-market flow perspective, the impact of production disruption is linked and traceable to the consuming markets. For the protein products under consideration in this analysis, a variety of consumption channels were included. The consuming markets represented the aggregate volume of meat and poultry as well as meat and poultry products that were shipped into consumer channels such as wholesalers, supermarkets, and other retailers. That volume also included industrial consumption by meat processing facilities that produce processed meat products such as sausages, hot dogs, and luncheon meats.

The major consuming states subject to the highest impacts of disruption were North Carolina, Illinois, and Kansas. In North Carolina, 85% of the 4 million annual inbound tons of truck shipments originated in affected counties. Illinois had 80% of the over 3 million inbound tons shipped by truck from disrupted origin counties, and Kansas showed 75% of the 2 million tons delivered from affected production points. Nebraska received over 3 million tons by truck annually, with 70% coming from affected markets. The analysis of the top consuming markets appears in Figure 1. 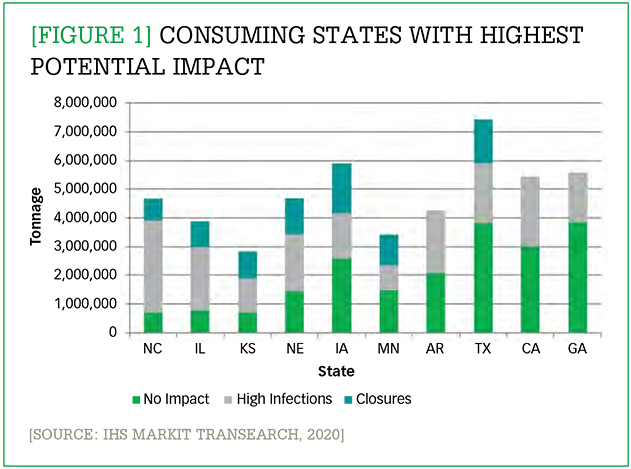 As the COVID-19 pandemic continues to spread, particularly in some states with significant levels of meatpacking and processing facilities, forecasting the 2020 annual production volumes is extremely challenging. While the individual facility closings are typically of short duration to allow for thorough cleaning, the implementation of enhanced-safety worker protection measures also effects plant productivity levels and ultimately output volumes shipped. The already identifiable impacts of this disruption are spot shortages of certain meat products in some market areas and higher consumer prices.

There have also been changes in distribution patterns. Some major food service providers that previously supplied only institutional and restaurant markets are offering direct-to-consumer sales. For producers, however, the shift from commercial and institutional supply channels to retail and direct-to-consumer remains challenging, as there are different packaging and labeling requirements for each of these consuming sectors. There were also reports of trucks arriving for pickups or deliveries at processing plants, only to learn that the facility was closed.

Paul Ciannavei is an associate director at research and analysis firm IHS Markit.
You must login or register in order to post a comment.