We use cookies to provide you with a better experience. By continuing to browse the site you are agreeing to our use of cookies in accordance with our Cookie Policy.
Home » Brightening skies, but still cloudy

According to the International Air Transport Association, the global airline industry suffered a 25-percent decline in revenue last year due to the collapse in world trade. Carriers naturally responded by reducing capacity—and in some cases, by exiting the freighter business altogether.

Global airfreight traffic rebounded strongly in the fourth quarter of 2009, and in the first half of 2010, it continued to post double-digit gains over year earlier levels. As of this writing in mid- July, most carriers have reacted cautiously when increasing capacity in response to recovering demand; as a result, the supply/demand balance in many markets has tightened dramatically in recent months, causing rates to rise substantially. 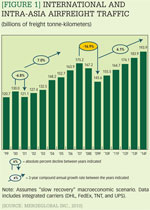 This situation of increasing demand and limited supply may have supply chain managers wondering about the future availability and pricing of intercontinental capacity—and, if rates continue to rise, what other options they might have.

Unsustainable demand growth
How long will global airfreight traffic keep rising by double-digit percentages? My view is that the rebound in demand is largely due to inventory restocking and government "stimulus" spending in many developed countries. Both of these effects on demand are transitory. Thereafter, traffic growth will mostly depend on growth in consumption, especially in the United States and Europe, two of the largest markets for intercontinental air cargo. But personal consumption expenditures in both of those markets are likely to remain depressed because of persistently high levels of unemployment. As a consequence, airfreight demand growth will flatten out in the coming years. (See Figure 1.)

That growth may also be constrained by rising energy prices and competition from other transport modes. While air provides the fastest and most reliable way to transport goods between continents, it is also by far the most energy-intensive intercontinental transport mode. Rising energy prices will widen the unit-cost gap between air and ocean transport. Meanwhile, ocean carriers continue to expand daydefinite services in an attempt to persuade shippers to "downgrade" the least time-sensitive portion of their air shipments. These offerings will only grow stronger as ocean carriers shift from survival mode to competing on service—specifically, by resuming normal vessel speeds, which requires more fuel than "slow steaming" but reduces transit times and thereby makes daydefinite products more competitive against standard air freight. Additionally, there is the prospect of competitive rail freight service linking China and Western Europe, which would further encroach on air freight's share of the Asia-Europe trade.

For these reasons, we expect a steady but slow recovery in global airfreight traffic. Different markets will grow at different rates, with emerging markets such as Brazil, China, and India enjoying stronger economic and air trade growth than developed countries.

Dealing with capacity constraints
When air carriers responded to the downturn in demand by cutting capacity, many parked freighters and reduced the flying hours for their remaining fleets. Certain carriers, including JAL and Delta/Northwest, decided to exit the freighter business. Surviving freighter operators are under pressure to consolidate in order to improve financial performance. For example, Cathay Pacific and Air China have announced plans to combine their freighter businesses into a new joint-venture company.

The downturn also prompted many passenger carriers to defer delivery of new widebody aircraft. As a result, global belly capacity (which accounts for roughly half of total intercontinental air cargo capacity) will grow relatively slowly in 2010-12.

If cargo demand remains strong, carriers may decide to reactivate some of the dozens of large freighters that currently are parked. However, it will not make economic sense to reactivate all of them due to their age and/or the cost of maintenance work required to return them to service. Carriers could instead expand their fleets with new or converted freighters, but they may have trouble securing financing on viable terms because financial markets now view freighters as risky assets.

What are the broad implications of these developments for shippers? First, air freight may become significantly more expensive relative to surface transport, especially if energy prices rise significantly. Second, rising airfreight prices will likely spur additional modal competition as ocean carriers (and perhaps railroads in certain markets) improve the quality and expand the geographic scope of their day-definite products. Finally, if surface modes succeed in capturing a larger share of the standard airfreight market, freight forwarders and airlines may be forced to respond by improving service. Apart from much-publicized investments in automated booking, billing, and tracking systems, forwarders and carriers could change their business relationship in order to improve service. For example, they may revamp the current pricing model so that forwarders have less economic incentive to delay certain shipments in order to build up large consolidations that command the lowest prices from the airlines. In short, shippers should benefit from the results of intensifying competition between transport modes.

Air
David Hoppin is an independent transportation and logistics consultant and strategist.
You must login or register in order to post a comment.