We use cookies to provide you with a better experience. By continuing to browse the site you are agreeing to our use of cookies in accordance with our Cookie Policy.
Home » September LMI reaches highest level in two years

Logistics industry roars back from pandemic-driven lows, driven by tightening capacity in transportation and warehousing as demand for logistics services grows ahead of Q4 peak season.

Economic activity in the logistics industry was up for a fifth straight month in September, continuing its recovery from a spring low brought on by the coronavirus pandemic, according to the latest Logistics Manager’s Index (LMI) report, released today.

The September LMI surged to a reading of 70.5, a level not seen since mid- to late 2018, and up considerably compared to a year ago, when the index had settled into the mid- to low-fifties range. Released the first Tuesday of each month, the LMI gauges the state of the industry by measuring inventory, warehousing, and transportation activity via a survey of North American supply chain and logistics professionals. An LMI reading above 50 indicates expansion in the industry; a reading below 50 indicates contraction.

LMI researchers attribute the rebound to a surge in e-commerce activity, which requires logistics-intensive services, along with inventory restocking as retailers ready for peak-season shipping demands—especially for goods coming from international suppliers, who had difficulty making regular deliveries during lockdowns in the early days of the pandemic. The increased activity is squeezing demand for warehousing and transportation services, which remain at a premium. 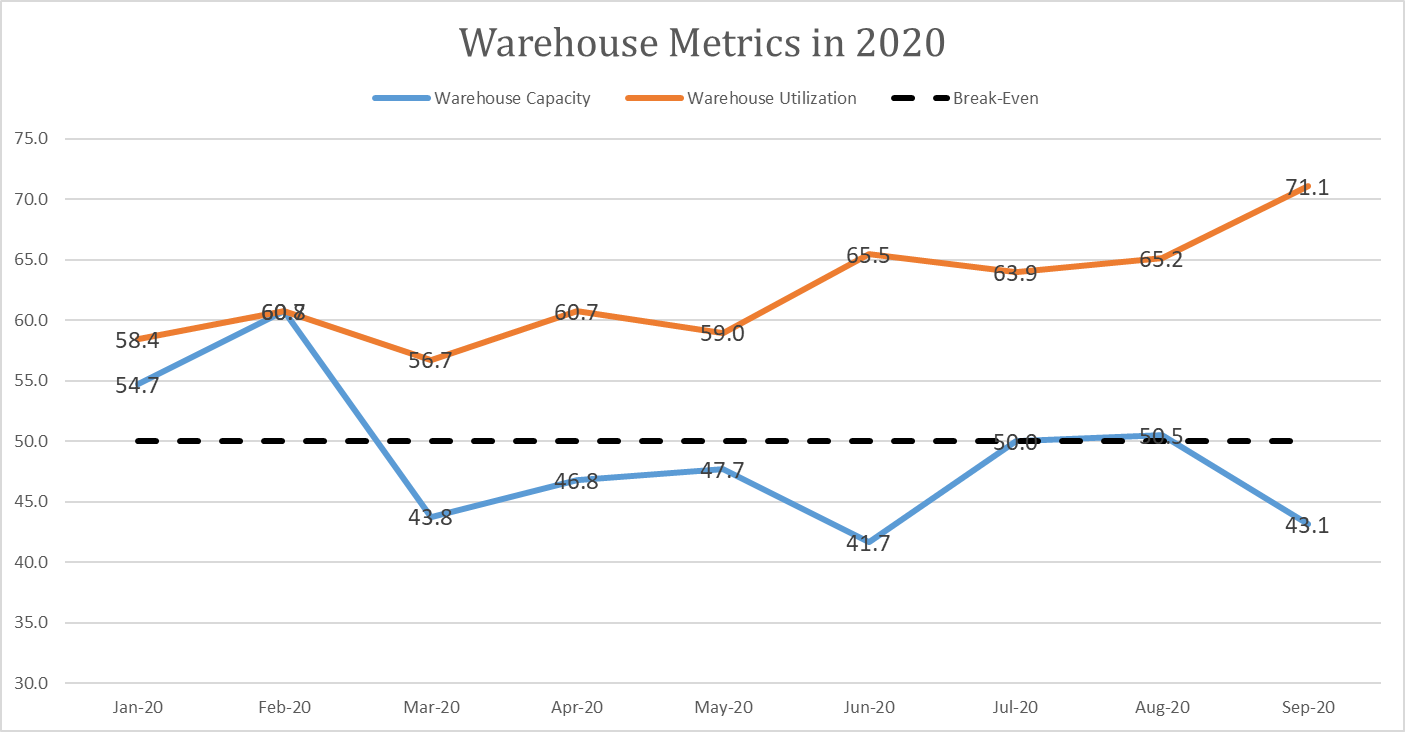 “It’s hard to find [warehouse] space and a truck—and when you do find it, it’s going to be expensive,” LMI researcher Zac Rogers, assistant professor of supply chain management at Colorado State University, said.

Rogers said he expects demand to hold steady through the end of the year, noting that the industry was already feeling the effects of fourth-quarter, peak-season activity in late summer and early fall.

“[Now] is the time we would see the highest price and lowest capacity readings—we usually see that in Q4,” he said. “But we’re already at that level. We’re seeing it now, and holiday shopping hasn’t started yet … Demand for warehousing and transportation will be up for the rest of the year.”

Rogers also pointed to an expected surge in e-commerce this holiday season “by an order of magnitude we’ve never seen” and the industry’s need to prepare for it. He pointed to retailers’ efforts to promote early holiday shopping as one way to address that need.