We use cookies to provide you with a better experience. By continuing to browse the site you are agreeing to our use of cookies in accordance with our Cookie Policy.
Home » Climbing out of a deep hole
RAIL

Climbing out of a deep hole

The railroads have been hit hard by the coronavirus pandemic. But volumes were already weak prior to the current crisis. What is the way forward?

As these words are written in early July, the full extent of the impact of the coronavirus on the economy in general and on the rail industry in particular may be starting to come into focus. Carload volume appears to have bottomed out in mid-May, with total North American carloads down by almost 30% from the prior year. In the subsequent weeks, volume has sequentially improved and the year-over-year deficit has contracted, although it remained most recently at over 20%.

The damage has been almost universal across all commodities. For the second quarter, overall carloads (excluding intermodal) showed a year-over-year deficit of more than 23%, with 19 of the 20 major commodity groups notching losses (only farm products excluding grain showed a gain). Most noteworthy was the near disappearance of motor vehicles and equipment shipments, which at one point were down a staggering 80% due to the almost total shutdown of the continent’s automobile assembly plants. Also significant was a decline in coal shipments of more than 35%—this on top of years of previous declines.

That carloads are down sharply is hardly surprising, given that the economy has been placed in the equivalent of a medically induced coma. In truth, there is little if anything that the rail industry can do in the near term. In time, the pandemic-affected volumes will return, although it appears likely that some long-term damage has been done. For instance, shipments of crude-by-rail and frac sand have been decimated by the turmoil in the energy markets. Shipments of petroleum products and crushed stone, sand, and gravel were down 30% and 26% respectively versus the prior year in the second quarter. With the damage done to the fracking sector, will all these carloads return?

The situation is compounded by the fact that carload volumes were in decline even before the pandemic began to wreak its damage. Total North American carloads declined by 3.8% in 2019, with only three of 20 commodity groups registering year-over-year gains (nonmetallic minerals, petroleum products, and “other commodities”). Things looked no better in the first quarter of this year, with total carload volume off by 4.4% versus 2019 Q1.

Some of the lost volume was due to secular changes over which the railroad industry had no control. Chief among these casualties was the coal sector, which has continued its long-term decline, due in large part to economic pressures from competitive energy sources such as inexpensive natural gas and rapidly improving renewables. No matter what the current administration does with regard to reducing environmental regulations, these economic pressures will continue to drive coal down further, and therefore the rail industry cannot count on a dramatic resurgence even when the economy does come back to life.

Setting aside such secular issues, it now seems clear that much of the remaining pre-pandemic volume loss was due to the widespread adoption of the “Precision Scheduled Railroading” (PSR) mantra by the industry. This philosophy has resulted in a streamlined railroad network moving only those carloads that are most well-suited to the railroads’ operating needs, while at the same time, rail rates have continued to increase at above-inflation levels. The result has been a sloughing off of volume that is too intricate, troublesome, or otherwise demanding of rail resources. Profitability has hit record levels, even as volume has continued to decay.

PSR adherents have maintained that the lost volume was an inescapable “Act 1” of the story, which would permit the railroads to achieve highly reliable and efficient operations (hence the presence of the word “precision” in PSR). This would be followed by “Act 2,” which would see volume being won back from trucks as the railroad carload service product improved. No doubt, if this was going to happen in 2020, the pandemic has put an end to such hopes, at least for the moment. But in reality, even prior to the pandemic, there was no sign of the markets turning in the railroads’ favor.

Intermodal on the front lines

If volume is to be lured back to the rail, certainly the front line of the battle is intermodal. Unfortunately, the pandemic has not spared the sector. Per the Association of American Railroading, intermodal originations through mid-year were down over 9.8% year-to-date and 11.9% year-over-year in the second quarter. Intermodal movements of international (ISO) containers were hit early, as COVID-19 first disrupted the Chinese economy, and with it, the normal flow of goods into North America, upon which intermodal heavily depends. Then, just as China began to regain its economic stride, the U.S.’s lockdowns knocked the pins out from under domestic demand. Volume hit a low in mid-April with a deficit versus prior year of over 18% before beginning to recover.

But, as with carload, intermodal’s issues predated the pandemic. After many years of consistent growth, overall intermodal revenue loads declined 4.1% in 2019, according to the Intermodal Association of North America (IANA),even though the economy and truck freight demand were growing. Intermodal’s share of the U.S. long-haul freight market peaked in 2018 Q2 at 12.7% of the dry van and reefer truckloads moving 500 miles or more. Since then, share has dropped sharply for seven straight quarters down to 10.7% in 2020 Q1. (See Figure 1.) This is an unprecedented event. 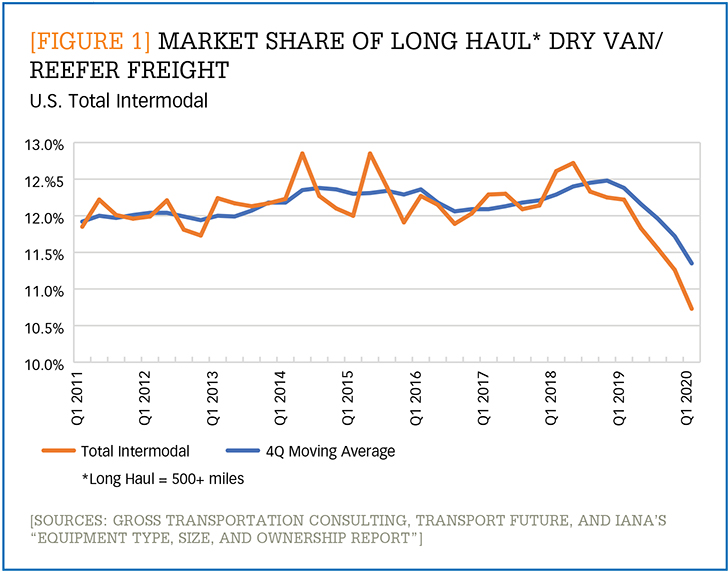 The PSR revolution has brought major change to the intermodal landscape. In the interest of streamlining and simplifying operations, secondary lanes have been eliminated. Direct rail movements through interchange locations such as Chicago have been axed. Thus, more containers are now being grounded when they reach Chicago to be moved via rubber tires across town. A good percentage of these never regain the rail but rather proceed directly to their destination via the highway. Increasing pressure is being brought to bear to convert the remaining trailer-on-flat-car business to container, again in the interest of increasing capacity and eliminating complexity. The results have been mixed, with some volume converting over but some going back to the highway.

Meanwhile, as trucking rates have softened due to an abundance of capacity, intermodal rates have not followed suit. Intermodal pricing managers have chosen to maintain margins at the expense of volume. This has been particularly true in the case of the rail-owned domestic container fleet, which has suffered volume declines that substantially exceeded those seen by the private intermodal fleets.

In summary, the second chapter of the PSR revolution, that of volume gains and increasing share, remains as yet unfulfilled. Whether and when the industry will turn the page to this new golden era remains an open question.

A year of transition