We use cookies to provide you with a better experience. By continuing to browse the site you are agreeing to our use of cookies in accordance with our Cookie Policy.
Home » E-commerce in the age of COVID-19
MONETARY MATTERS

E-commerce in the age of COVID-19

Retail e-commerce was already on the rise when COVID-19 shook consumer behavior to its core. Now the rate of change will only accelerate.

It is clear that the spread of COVID-19 and the global measures to combat it will be the defining story of 2020. In addition to its terrible health and human toll, the virus has caused widespread disruption to global supply chains, paralyzed industries such as travel and live entertainment, and plunged the global economy into a sudden recession. It has even reached into our homes, changing the way we work, learn, socialize, and shop.

Yet the evolution of the pandemic looks radically different than it would have even one or two decades ago. While the interconnected nature of global trade has helped to slash the proportion of the world population living in extreme poverty by nearly two-thirds in the last 20 years, it also allowed the virus to spread faster than it would have in a less connected time. Meanwhile, readily available internet access has made it far easier to adapt our lives and livelihoods to the realities of stay-at-home orders than it would have been before internet was seen as a household staple.

As of April 20, 2020, more than 315 million Americans were under some form of stay-at-home order or advisory. Amid widespread closures of storefronts for “nonessential” goods and services, U.S. retail sales in April tumbled a record 16.4% on top of an 8.3% decline in March, according to the U.S. Census Bureau. The effects of the business closures and social distancing related to COVID‑19 were clearly visible in the details, which were sobering—but not surprising. Most categories of sales plunged at unprecedented rates. Sales at clothing and accessories stores essentially stopped short, falling 89% relative to April a year before. Sales at electronics and appliance stores were down 65% versus last year, furniture and home furnishings sellers saw sales plunge 67%, and restaurants and bars did 49% less business than in April 2019. Even sales at “essential” health and personal care stores were down 10%. Modest positive offsets at food and beverage stores, which gained 12% relative to a year ago, paled in comparison to these calamitous declines.

Even after initial stay-at-home orders lift, there may be localized flare-ups in the next year during which additional two- or three-week mandated social distancing periods might become necessary. The psychological scars from COVID-19 could suppress some types of consumer spending for years to come if the “fear factor” is not controlled by the development of a vaccine or other medical treatments. In IHS Markit’s May baseline forecast, we expect retail sales to decline 13.2% over the course of 2020 (fourth quarter over fourth quarter), much more than consumer spending as a whole (which is forecast to decline 8.0%).

Even though they can’t go out, today’s consumers are going online. In April, retail sales at nonstore (mostly online) retailers jumped 8.4%, even as total retail spending fell. Sales via this channel were up 22% over the last 12 months. The Capgemini survey found that 37% of respondents reported having high levels of interaction with online channels since COVID-19, a 7 percentage-point increase.

The trend of retail sales shifting online from brick-and-mortar establishments is hardly new. E-commerce retail sales were already growing at a breakneck 16.7% pace in the fourth quarter of 2019 relative to a year earlier. (See Figure 1.) It is true that around the end of 2019 the monthly pattern of sales at electronic shopping and mail-order stores gave the impression that e-commerce had briefly plateaued after a gangbuster summer. However, the pattern of a strong middle of the year for online sales followed by a slower-growing autumn is more reflective of a shift in sales earlier into the year due to influences like Amazon’s Prime Day in July. 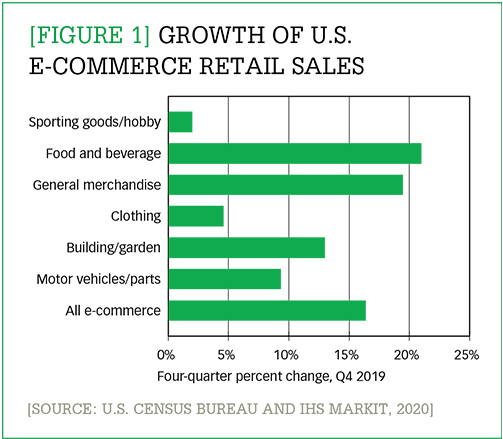 In some ways, retail is late to the e-commerce party. As we previously described in the **italics{CSCMP’s Supply Chain Quarterly} Q2/2018 issue, business-to-business (B2B) e-commerce has historically accounted for the vast majority of total e-commerce sales. Due to the use of electronic data interchange (EDI) networks in the 1970s and 1980s, the B2B world had a considerable head start in terms of e-commerce infrastructure. Originally used in the transportation and shipping industries, EDI saw greater adoption by other industries in the mid-1970s thanks to the implementation of industry standards and the publication of the file transfer protocol (FTP) in 1973, which allowed file transfers between internet sites. By 1991, the year the federal government opened up the internet for commercial use, nearly 12,000 companies were using EDI. In 2003, approximately 21.0% of manufacturing sales and 14.6% of wholesale sales in the United States—the vast majority of which constitute B2B trade—were conducted via e-commerce. By 2017, the last year for which these sector-level figures are available, they had risen to a 67% share for manufacturing sales and 32% for wholesale—versus only 9% for retail trade. (See Figure 2.) 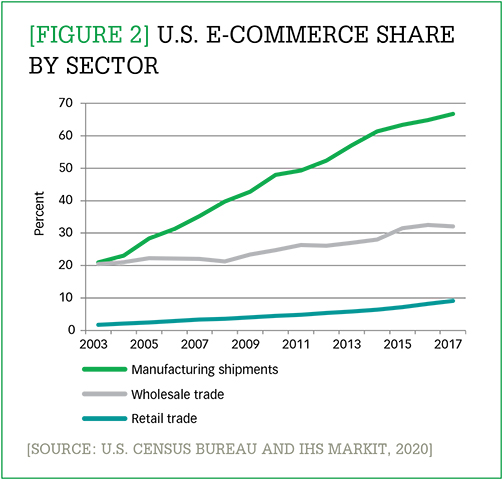 The crisis, however, is giving retailers no choice but to catch up. Many consumers who might have been late (or never) adopters are being forced online for the first time, and some of the shift in consumer shopping habits is bound to stick as new online shoppers come to appreciate its convenience. It is not just the demand side that will shift; the distribution of retail businesses will also increasingly favor those more geared toward online sales. When the dust settles on the COVID-19 pandemic, there may be fewer retailers left standing overall. Although many traditionally physical retailers have done a good job marrying their online and brick-and-mortar operations, some are already considering declaring bankruptcy because they will be unable to survive an extended period of closure. A robust web presence is one recourse for retailers, and COVID-19 is giving an advantage to businesses with a strong online operation.

In short, we expect the pandemic to accelerate trends toward online retail shopping that were already in place. To adapt to the extraordinary realities of the pandemic, more retailers are experimenting with novel business models, such as buy online for in-store or curbside pickup. Stores, including grocery, might change their physical footprint to have less consumer-facing space and more of a warehouse-like layout, where workers or machines can quickly build virtual shopping carts for delivery.

As of the fourth quarter of 2019, e-commerce retail sales represented 20.7% of total retail sales excluding food, gas, and autos. IHS Markit is forecasting that share to jump to 23.1% in the second quarter, up 1.2 percentage points over the previous quarter, which would be the largest such increase on record. By mid-2021, we expect one quarter of retail sales excluding food, gas, and autos to be conducted online. The accelerated transition of retail trade to the online channel (Figure 3) won’t be the most earth-shaking change to come out of the COVID-19 era—but it will certainly hit close to home. 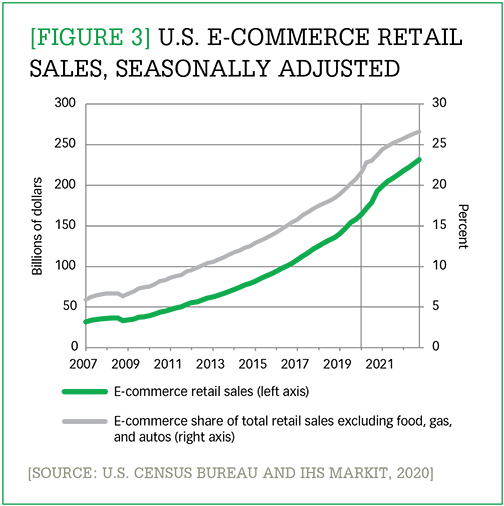