We use cookies to provide you with a better experience. By continuing to browse the site you are agreeing to our use of cookies in accordance with our Cookie Policy.
Home » Tighter air security will need a deft touch to avoid economic harm
Monetary Matters

In August 2010, the United States will require 100 percent of cargo shipped on passenger aircraft to be screened by security personnel, machines, or specially trained dogs. That requirement, mandated by the 9/11 Commission Recommendations Act of 2007, could have a substantial economic impact on shippers, carriers, airfreight forwarders, and other industry stakeholders if it is not handled properly.

The agency charged with screening and inspecting air cargo is the Transportation Security Administration (TSA). After the terrorist attacks on September 11, 2001, the TSA focused its efforts on passenger screening; cargo carried on passenger aircraft ("belly" cargo) and all-cargo carriers went largely unnoticed for some time. Now the agency has been ordered to devote more of its efforts to securing commercial aviation. 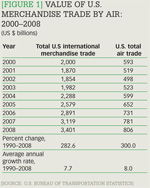 There is no question that there is a need for aircraft of all types to be protected from potential attack. What remains uncertain is how successful those efforts will be, and what economic effect the screening initiative will have on the air cargo industry and its customers.

Potential consequences
Globally, air freight represents 3.72 percent of all shipment units and comprises about 0.4 percent of world gross domestic product (GDP). Within the United States, air cargo represents just 1 percent of all freight volume yet it accounts for some 25 percent of the total value of U.S. freight across all modes of transportation. (See Figure 1.)

Getting cargo security right is critically important: by providing same-day, next-day, and just-in-time deliveries, air cargo plays an invaluable role in the operation of today's lean supply chains. A week-long disruption at John F. Kennedy International Airport in New York, for instance, would deliver a severe blow to all forms of aviation as well as to the U.S. and global economies.

Accordingly, the rollout of a stricter security system must be designed and managed to diminish any chance of unintended economic harm. This will be challenging for several reasons. For one thing, the augmented screening requirements come during a period of economic uncertainty. In 2008, the industry suffered horribly as airfreight volumes fell by as much as 25 percent on some routes. There have been encouraging signs of growth since November 2009, but that improvement is not likely to continue for long. In fact, most forecasts for airfreight shipment volumes for the coming year are flat, due in part to expectations that global consumer spending will be stagnant.

For another, implementation of new procedures almost always leads to "hiccups" in any system, and the introduction of more restrictive security mandates is likely to be no exception. The resulting inefficiencies may delay shipments, causing substantial financial losses for air carriers and higher costs for shippers.

Even a small disruption in airfreight movements could have a notable impact. IHS Global Insight's analysis shows that a disruption of only 1 percent in total industry output in the United States would result in the loss of approximately 1,250 jobs directly tied to air cargo shipping, and 3,851 in total. Ultimately, 100-percent screening could tip the competitive landscape in favor of the bigger players in the airfreight industry, because the larger operators have more infrastructure, such as aircraft and crews, in place than do their smaller competitors. This means they are better equipped to handle the delays that may result from increased screening.

Government-industry cooperation
One way the U.S. government hopes to mitigate any harm to the nation's commerce is by bestowing more funding on the TSA. Thanks to a budget infusion of US $56.3 billion, the transportation security agency is planning to increase its staff by 5,000 and install more high-tech screening equipment. This increased funding and staffing should give the TSA most, if not all, of the resources it needs to meet the 100-percent screening requirement.

Although the airline industry has worked alongside the U.S. government to keep flying safe for both passengers and freight, achieving smooth implementation of the additional cargo screening measures will require even closer cooperation. To avoid potential disruptions to commerce, the industry must work together with legislators to help them understand the measures' potential effects on operations.

All things considered, air shipment offers a safe, consistent, and rapid option for the movement of goods worldwide. Still, the airfreight system must operate efficiently if it is to keep airlines and other air cargo players afloat in the current tough environment. The only way to achieve that is by ensuring a thorough but efficient detection process that maintains the flow of goods, not just in the United States but around the globe.

IHS Global Insight Inc. is a leading consulting company providing comprehen- sive economic information and forecasts on coun- tries, regions, and industries with particular expert- ise in global trade and transportation. IHS Global Insight serves more than 3,800 clients in industry, finance, and government through offices in 13 countries covering North and South America, Europe, Africa, The Middle East, and Asia.
You must login or register in order to post a comment.