We use cookies to provide you with a better experience. By continuing to browse the site you are agreeing to our use of cookies in accordance with our Cookie Policy.
Home » Report: Trucks remain prime target of cargo thieves worldwide
Forward Thinking 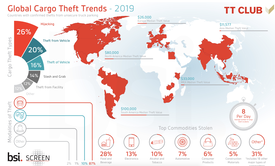 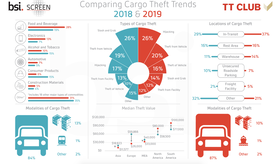 Trucks continue to be the overwhelming target of cargo thieves worldwide, according to a year-end 2019 report released Wednesday.

International transport and logistics insurer TT club and supply chain intelligence firm BSI released data for 2019 showing that 87% of cargo thefts targeted trucks in 2019, up from 84% in 2018, dwarfing theft from all other modalities, including warehouses and trains. What's more, 60% of truck incidents occurred while the vehicles were in transit, in rest areas, or at an unsecured parking location, according to the study's authors. There are an average of eight cargo theft incidents per day from unsecure truck parking worldwide, the authors also said.

Regionally, South America ranks highest in the median value of cargo per incident from unsecured truck parking, at $100,000, followed closely by North America, at $80,000. The data should raise a red flag for transportation companies and drivers around the world, the authors said.

"The median value of losses from these incidents ranges from $100,000 in South America to just over $11,000 in parts of Asia," said TT Club spokesman Mike Yarwood. "We are particularly keen to draw attention to the dangers of such informal parking and encourage the provision of more secured truck stop facilities."

The top three commodities stolen from cargo trucks in 2019 were food and beverages, electronics, and alcohol and tobacco.

Cargo volume down in Oakland