We use cookies to provide you with a better experience. By continuing to browse the site you are agreeing to our use of cookies in accordance with our Cookie Policy.
Home » Practitioners split on cap and trade
Forward Thinking

Practitioners split on cap and trade 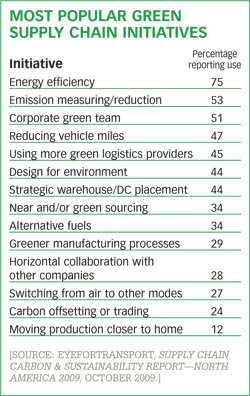 Supply chain professionals in North America are divided on the issue of "cap and trade" regulations. That's one of the key findings in Supply Chain Carbon & Sustainability Report —North America 2009, a report issued by eyefortransport, the United Kingdom-based research and publishing firm.

Under a cap-and-trade system, a company receives a permit to emit a limited amount of carbon dioxide. If emissions stay below that quota, it could sell its unused allotment to another that had exceeded or expected to exceed its quota. Companies would be fined for exceeding quotas, so for most it would be cheaper to buy another firm's unused allotment.

Forty percent of the 130 supply chain practitioners surveyed said that cap-and-trade regulations should be weakened before ratification because they will be too costly for business. In contrast, 38 percent said the proposed regulations have been watered down and should be strengthened. Just 22 percent agreed that they should be ratified as currently written.

Most companies are taking steps to reduce their environmental impact. Some 75 percent of survey takers said that their companies were involved in improving energy efficiency in their supply chains and distribution networks. The number two initiative was measuring and reducing emissions, cited by 53 percent. (For details, see the chart, at right.)

Even as more companies move ahead with often costly green initiatives, they do not believe customers are willing to pay extra for environmental improvements. In fact, 21 percent of respondents said this was a big barrier to adoption of environmental programs in their companies; only 16 percent said it was not a concern.

Do you know a Rainmaker?