We use cookies to provide you with a better experience. By continuing to browse the site you are agreeing to our use of cookies in accordance with our Cookie Policy.
Home » New rail service opens up a "Northeast Passage"
Monetary Matters

If Marco Polo were alive today, he almost certainly would be taking advantage of a new rail freight service that is now running between China and Europe. In 2008, the German rail operator Deutsche Bahn AG launched an experimental service between China and Germany by way of Russia. The International Union of Railways (UIC) and rail infrastructure providers in Finland and Sweden have since started promoting this "Northern East-West Freight Corridor" for intermodal container service from the Far East to Scandinavia. Figure 1 shows this route.

The greatest potential advantage of the new rail service is that it promises transit times of just two weeks for containers moving from the Far East to Europe. That's a dramatic time savings compared to the six weeks it normally takes by sea. Conceivably, this rail service could also offer benefits for those beyond the confines of Europe, as some of the containers could ultimately be transferred onto ships moving across the Atlantic Ocean. That opens the possibility for importers along the eastern coast of North America to enjoy significant time savings compared to all-water service from Asia. 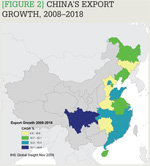 Although the new rail service appears to be an attractive alternative, operators will have to overcome a number of challenges before it can become reliable enough to attract steady shipment volumes. For one thing, any rail equipment used will have to navigate tracks with different gauges as it rolls across two continents. Railroads in Western Europe and China both use a standard gauge system, but trains run on wider-gauge track in Russia, Finland, and Kazakhstan. Although passenger and some freight trains in Europe are equipped with changeable gauges so they can cross different-gauge tracks, the heavier weight of freight cars makes this approach impractical on the China-to-Europe route. Furthermore, the reluctance of Russia's railroads to accept other carriers' freight cars means that intermodal containers must be transferred twice along the route to Sweden and Norway.

Varying track gauges aren't the only impediment confronting this rail service; there is also the issue of delays in border clearance. For security reasons, Russia insists on having the right to inspect all containers that pass through the country, even sealed, in-transit shipments. Cargo inspections by Russian officials undoubtedly will lengthen transit times and add to costs. And it is not cheap to run the train as it stands now; the operators already bear the considerable expense of employing their own guards to protect the cargo from theft during the journey.

Shippers that decide to use the new intercontinental route may have to put up with irregular service frequency for some time to come. That's because the trains often do not depart until the operator has assembled enough freight to justify the cost of the trip. This could spark a vicious cycle that will be difficult to break. Unless departure frequencies are at least weekly, the benefits of a 14day service diminish severely, and shippers will be unwilling to sign on. But without a sufficient customer base, there is unlikely to be enough volume to assure regular service.

There's another reason why it may be difficult to fill this intermodal pipeline with any regularity. Transportation services that attempt to fill a market gap between price and speed are not always successful (remember "fast ships"?). The operators run the risk that a service that is cheaper than air freight but more expensive than an all-water route will not find a regular market and will only be regarded as a supplementary service. If that happens to the Northern East-West Freight Corridor, then its promoters will have a tough time making this service profitable.

Although the train operators clearly have some challenges and roadblocks to overcome right now, their idea could pay off handsomely in the future. The key will be China's pattern of export growth. Until now, most of that country's export industries have been situated along the Pacific Coast, near major seaports like Hong Kong and Shanghai. The dramatic growth of the eastern cities and the lack of economic opportunities in other parts of the country have led the Chinese government to encourage growth further inland through its "Go West" development program. With that in mind, IHS Global Insight predicts that the greatest growth in China's export industries over the next decade will occur in the inland province of Sichuan (Szechwan). Figure 2 shows predicted export growth through 2018.

Why does this matter? A rail service from China's interior to Europe offers an attractive option for inland manufacturers, especially since strategically located railways on the borders with Mongolia and Kazakhstan have spare capacity. As the center of Chinese industry shifts from the coast and moves into the country's interior, a rail corridor that runs to northern Europe could eventually become a viable choice for moving Chinese goods to Western markets.

IHS Global Insight Inc. is a leading consulting company providing comprehensive economic information and forecasts on countries, regions, and industries with particular expertise in global trade and transportation. IHS Global Insight serves more than 3,800 clients in industry, finance, and government through offices in 13 countries covering North and South America, Europe, Africa, the Middle East, and Asia.
You must login or register in order to post a comment.