We use cookies to provide you with a better experience. By continuing to browse the site you are agreeing to our use of cookies in accordance with our Cookie Policy.
Home » Better days ahead—eventually—for U.S. trucking industry
Monetary Matters

Keen observers of supply chain developments know that the state of the U.S. trucking industry offers clues to the overall health of the country?s economy. Moreover, motor carriers? problems are likely to have some impact on their customers? supply chain performance.

For those reasons, anyone who does business in or with the United States should be concerned that the last few years have not been kind to the for-hire trucking industry. High fuel prices exacerbated the effects of the recession even before the financial crisis began to unfold in September of 2008. Individual shippers—indeed, entire industries—have reduced their demand for transportation services as their own operations have felt the effects of the tough economy. IHS Global Insight has estimated that by the end of 2009, total freight tonnage moving on America?s highways will have dropped by some 20 percent from its peak in 2006. 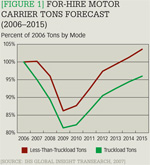 Figure 1 shows this decline as a percentage of total tonnage carried in 2006 by both less-thantruckload (LTL) and truckload (TL) carriers in the United States. As the graph indicates, the decline was very steep and unfolded quickly, giving carriers little time to react to rapidly changing market conditions.

Note that from 2006 to 2007 truckload carriers suffered a much worse decline in tonnage than did the LTL sector. During economic downturns, truckload operators are likely to suffer earlier than LTL carriers because the decline in order volumes makes it harder for shippers to move goods in full trailer loads. That is also the reason why LTL tonnage is expected to recover to 2006 levels before the truckload segment does.

Given such a significant decline in freight volumes, truckload carriers will have to be creative if they are to keep their trucks moving. In fact, there is some evidence that truckload companies are working in conjunction with third-party logistics providers to make a play for freight that traditionally has been handled as LTL. This development is one reason why LTL carriers are likely to experience a steeper drop-off in tonnage from 2008 to 2009 than is expected for truckload carriers.

Capacity continues to contract
At present, motor carriers are responding to the downturn by reducing capacity. One way they are doing so is through fleet reductions and delayed vehicle replacements. The poor economy has meant that carriers are unable to afford new equipment and there is not enough freight demand to justify fleet expansion. U.S. manufacturers have seen a dramatic drop in sales of Class 8 heavy-duty trucks since 2006, from 284,000 units to a projected 92,500 in 2009. Sales are projected to increase only slightly in 2010 before rebounding, albeit to levels that will remain below their 2006 peak.

The trucking industry is also losing not just jobs but entire companies. Donald Broughton, an analyst with the investment bank Avondale Partners, reported that in 2008, more than 3,600 trucking companies went out of business and an additional 480 closed their doors in the first quarter of 2009. In January of 2009 alone, the American Trucking Associations reported, the industry lost 25,000 jobs. The majority of these closures occurred through bankruptcies of smaller carriers, mostly in the truckload sector. All together, these losses account for more than 7 percent of the industry?s capacity that is no longer operating on U.S. highways.

The contraction has been particularly pronounced in the less-than-truckload sector. Because LTL carriers generally require more infrastructure than their full truckload compatriots, they often must do more than simply park trailers to reduce their capacity and expenses. YRC Worldwide, for instance, cut 10 percent of its work force in the first three months of the year and closed or consolidated nearly 200 terminals, including about 30 operated by its regional affiliates, USF Holland and USF Reddaway. YRC Chairman, President, and CEO William Zollars has said that the merged operation (which also reflected the integration of YRC?s Yellow Transportation and Roadway Express units) cut the company?s overall capacity by 35 percent.

Among the other top LTL carriers, Con-way Freight closed 40 terminals in the first quarter of 2009, and in February, FedEx Freight cut 900 positions at 150 of its facilities. All in all, about 8 percent of the LTL capacity in the United States has already left the market, according to analysts. This is still smaller than the 14-percent drop in LTL tonnage seen from 2006 to 2009.

Even though the short-term situation looks grim, less-than-truckload tonnage is expected to rebound to 2006 levels within the next five years. Nationally, the sector should grow at an average rate of roughly 3 percent per year until 2015. But as Figure 2 illustrates, that growth will not occur uniformly throughout the United States. IHS Global Insight?s forecast for total originating and terminating LTL tonnage growth rates, broken down by U.S. Census division, calls for the fastest growth to occur in the Mountain states— almost a full percentage point higher (3.9 percent) than for the country as a whole.

Should LTL carriers shed more capacity, as seems likely, they would do well to avoid closing facilities in the faster-growing regions and avoid ceding markets they may have to re-enter as the economy recovers. Instead, they can focus on scaling down in those regions where growth is likely to be slower, such as the Northeast or Upper Plains states. Perhaps more importantly, as more carriers shed terminals, those properties will become available at lower cost than in the past. By paying attention to regional and local freight trends, a carrier may be able to pick up a bargain-priced terminal in a growth area.

The current situation is not very promising for motor carriers, but a crisis can also provide an opportunity for the enterprising trucker. It will be interesting to see how many motor carriers seize the opportunity to prepare for the upturn, and at what point they choose to do so. For as soon as carriers begin making such moves, it will indicate that they believe the economy is about to bounce back.

Steve Owens is a senior consultant with IHS Transportation.