We use cookies to provide you with a better experience. By continuing to browse the site you are agreeing to our use of cookies in accordance with our Cookie Policy.
Home » Hurricane Dorian forces port closures across U.S. East Coast
Forward Thinking 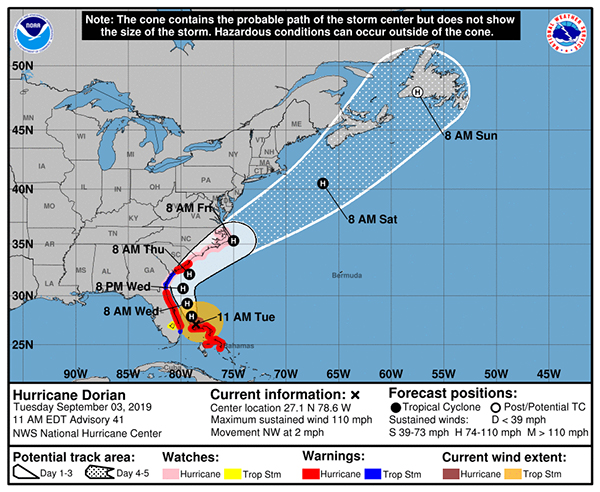 As Florida braced for landfall by Hurricane Dorian on Tuesday, officials were freezing or diverting the flow of goods and people across the state on highways, ports, railroads, and airports. The impact is on track to disrupt the movement of freight up the heavily populated eastern seaboard through the busy back-to-school week.

Keep up with the storm

Click here for an updated storm map from the U.S. National Hurricane Center.

Logistics facilities across the southeast U.S. played a long waiting game over the Labor Day weekend as the hurricane nearly stalled its slow northern march from the Caribbean Sea into the North Atlantic Ocean. The storm ground its way slowly over the Bahamas on Monday, flooding the low island region with storm surge waters and high winds.

Unsure of forecasts of where the hurricane might make landfall on the mainland U.S., both Port Everglades—located just north of Miami—and the Port of Jacksonville on the far northern edge of Florida are currently closed by the U.S. Coast Guard until further notice.

Both sites are shuttered under "Hurricane Port Condition ZULU," where a port's terminals remain closed to all commercial traffic for the duration of the storm threat, until it is cleared to reopen by the Coast Guard. At the Port of Jacksonville, all offices and facilities will remain closed Tuesday and Wednesday, in alignment with the City of Jacksonville's municipal office closures.

Coast Guard storm conditions begin with Whiskey, when gale force winds are expected to arrive at the port within 72 hours. As a storm nears its target, the status changes to X-Ray (expected within 48 hours), Yankee (predicted within 24 hours), and Zulu (impending within 12 hours), with increasingly tight restrictions on the movement of oceangoing ships and barges, on cargo operations, and finally with full port closure.

But ports located further north on the east coast were still in more of a wait-and-see mode. While North Carolina Ports had originally planned on Sept. 1 to close its ports of Wilmington and of Morehead City completely on Wednesday, it later delayed that closure based on the storm's unexpectedly slow progress north.

One benefit of the storm's slow progress is that it is giving authorities more time to lay plans for evacuations and to re-route vehicles away from danger zones. To aid in that process, the Federal Motor Carrier Safety Administration has lifted its restrictions on the number of hours that truckers are allowed to drive their vehicles in the region, saying the looser regulations would help provide vital supplies and transportation services to disaster areas under emergency declarations.

However, many local transportation offices remain closed in the face of the threat, including the Florida Department of Highway Safety and Motor Vehicles (FDHSMV)'s announcement it had closed its state offices in several Florida counties on Tuesday for non-essential personnel. The Tallahassee-based Florida Trucking Association is sharing information and updates on these closures of ports and services through an emergency site dedicated to the storm.

As residents and transportation professionals evacuate their homes or move goods out of the storm's predicted path, the spike in travel could trigger ancillary challenges such as fuel shortages. On its storm site, the FDHSMV shared advice to cope with that issue, offering fuel tips such as: Once you reach a quarter full, start looking for gas stations near you to fill up; and Download the GasBuddy app to locate fuel stations with available gas near you.

Some freight fleets are putting contingency plans into play, including truckload and logistics provider Schneider Transportation Management. Green Bay, Wisc.-basedSchneider said today it is working with customers and drivers with shipments into and out of the potentially impacted areas, following a top priority of ensuring the safety and well-being of associates and of protecting customers' freight. The company has positioned drivers to be ready as soon as conditions safely permit to help facilitate the shipment of weather-related freight, such as emergency loads to the affected areas.

Meanwhile, businesses in other parts of the country were pitching in on Tuesday to help alleviate that hurdle. The Taylor, Mich.-based Atlas Oil Co. said it had deployed more than 100 emergency fueling assets, drivers, and mobile tanks from terminals around the country, drawing on its diversified supply points and nationwide logistics network to ensure organizations affected by Hurricane Dorian have access to critical fuel supply.

According to the company, Atlas is currently staging assets including custom StormProof trucks, off-road fueling vehicles, and transport trailers, which will serve as mobile gas stations throughout the region. "Our team of emergency fueling experts began tracking the storm a week in advance and are keeping a close eye on its development as it makes its way across the Atlantic," Atlas' director of emergency services, Jayme Oyen, said in a release. "Our driver team is strategically placed throughout the region, ready to respond to mission critical facilities and our contracted fuel assurance customers."

Forecast: AMR and AGV robot sales will soon bounce back from Covid-19 hit

Containers back up on Chinese docks as coronavirus triggers closures