We use cookies to provide you with a better experience. By continuing to browse the site you are agreeing to our use of cookies in accordance with our Cookie Policy.
Home » Bumpier road ahead

The U.S. trucking industry chalked up a record year in 2018, one that arguably was the best the industry has seen in decades, if not in its history. Most truckload and less-than-truckload (LTL) carriers set new high-water marks for freight tonnage, revenues, and profits as the economy surged, e-commerce continued its rapid growth, and businesses pulled forward inventory in advance of the Trump administration's China tariffs.

"I've been in this business 40 years and have never seen a year that busy," notes Marty Freeman, executive vice president and chief operating officer of Old Dominion Freight Line. 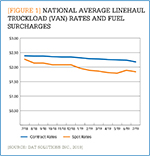 But 2018 is proving to be a tough act to follow. Demand for motor freight services in 2019 has softened. Last year there were an average of six truckload shipments vying for every one truck; this year, there are three truckload shipments competing for space on one truck. Dry-van truckload spot-market rates in July versus last year were down nearly 19% (see Figure 1), and the pricing pendulum has begun to swing back in the shipper's favor. Carriers are carefully trimming their fleets and scaling back truck purchases this year as the new capacity brought online to handle last year's surging volumes is now competing for fewer shipments.

Last year, when truckload capacity tightened, heavier shipments—typically those around 10,000 to 15,000 pounds—migrated from truckload fleets to LTL carriers, boosting LTL tonnage. That trend has reversed itself this year; those heavier shipments are transitioning back to truckload operators. At the same time, the explosion of e-commerce-generated freight is changing the profile of shipments—and tonnage handled—in LTL carrier networks. It's driving smaller, lighter, and more frequent shipments to and from more distribution centers strategically located to enable next-day—and in some cases same-day—delivery of goods to the end-user.

On balance, carrier executives are cautiously optimistic about the year aheadand expect capacity to gradually tighten as the year progresses. Yet the road ahead is not without challenges. "We are coming into some really critical periods," says Jim Fields, chief operating officer for LTL carrier Pitt Ohio. "Fortunately, the economy is still doing OK, still growing."

So, what's keeping trucking executives up at night? One of the big challenges, Fields believes, is managing the escalation of costs. "They're going up for all service providers," he says. Trucking executives are seeing constant increases in virtually every expense involved in running their businesses—from driver wages to maintenance to health insurance and the cost of tires, trucks, and trailers.

Another factor to keep a close eye on is the December deadline set by the U.S. Federal Motor Carrier Safety Administration for trucking operators to implement upgraded electronic logging devices (ELDs) to improve compliance with driver hours-of-service (HOS) regulations. For larger carriers, it's a technology mandate they are well on their way toward meeting. For smaller carriers, however, issues around the selection of a technology provider and the timing of the implementation may lead to missed deadlines and end up affecting industry capacity at year-end.

Fleets that already have upgraded their ELDs, however, are seeing a positive result: the number of HOS violations has been reduced by half. "[With] fewer hours-of-service violations, you have fewer vehicles ordered out of service. That opens up capacity you might not otherwise have available," says Bart De Muynck, research vice president, transportation technology, for the research firm Gartner Inc.

The potential benefits of upgraded ELDs and their data could go beyond regulatory compliance, says Darren Hawkins, chief executive of the LTL carrier YRC Worldwide. He believes that a trusted third-party clearinghouse, such as the American Transportation Research Institute (ATRI), could gather and analyze ELD data to provide insights about traffic and freight flows, time-of-day issues, detention, and more.

One issue that still remains unresolved is who owns the data gathered by the ELD and how this data will be used. "Many of the ELD contracts state that the telematics vendors own the data, and they can sell it ... to a third party," De Muynck says.

This idea of "infonomics" is very contentious, according to De Muynck. "Carriers understand their data is getting monetized," he says. "At some point, they are going to say, 'Give me a cut of that revenue, or I won't give you my data anymore.'"

Indeed, the growing importance of data and the speed of technological change has made having a cohesive technology strategy crucial for trucking companies, according to Pat Martin, corporate vice president of sales for LTL carrier Estes Express Lines.

"Today, data—how you capture, use, share, and manage it—has become just as important as the movement of the freight itself," says Martin. "Our ability to give [customers] visibility from the pickup all the way through to a clear delivery is critical. They are expecting shorter and shorter transit times and [setting] tighter delivery windows. We have to have the technology in place to deliver on those expectations."

Technology is important, but without drivers to move the freight, the industry will see increasing challenges in maintaining, much less growing, capacity. For now, driver recruitment and retention remain a universal concern for trucking companies, as more drivers reach retirement age and fewer younger driver replace them. A recent analysis by the American Trucking Associations threw this challenge into stark relief: If current trends continue, the industry could face a shortage of 160,000 drivers by 2028.

And that concern will not be eased by recently enacted federal regulations that set across-the-board standards for entry-level driver training. Essentially, under the new rules, candidates who want to enter the industry will need a certificate of completion or diploma from a certified driving school in order to get a commercial driver's license (CDL). But third-party schools today already are at capacity, says Greg Orr, president of truckload carrier CFI. "That's potentially a chokepoint in the industry's ability to produce enough drivers with the required training," he says. "And that will impact capacity."

Finally, crumbling infrastructure and increasing congestion also made the list of carrier executives' top concerns. "America's roads and bridges are dangerously deteriorated, and our interstate system is over 60 years old," notes John Smith, president and chief executive of FedEx Freight. "Our federal and state governments need to work toward modernizing our infrastructure ... and [to] adopt common-sense policy solutions, such as [allowing the use of] longer-combination vehicles to increase the efficiency, safety, and capacity of our transportation system."

It's not just potholes and aging bridges that are a concern. An ATRI study found that the U.S. trucking industry lost 1.2 billion hours in congestion-related delays on the national highway system in 2016—the equivalent of 425,000 commercial truck drivers sitting idle for an entire year. That's an image oddly out of sync with the nation's growing appetite for next-day and same-day delivery.

All of the issues and concerns cited above make shipper-carrier relationships more crucial than ever before. Indeed, the Great Freight Market of 2018 cemented the concept that it pays to be a "shipper of choice." During that period of time, carriers with scarce capacity gravitated to those shippers who demonstrated a desire to collaborate and cooperate rather than engage in old-style transactional relationships. But has the softer market put a damper on that trend?

"I think [shippers] are definitely collaborating now more than ever," says Estes Express' Martin. Most shippers, he says, recognize "a good working relationship is important to make sure they are not causing undue expense for the carrier to move their freight."

Orr, however, has seen more mixed results over the past six months. While some customers still are trying to figure out what they can do to be a shipper of choice, he says that those conversations are not happening with the same frequency they did in 2018.

And yet, Ricky Stover, executive vice president, sales and marketing at the nationwide refrigerated carrier C.R. England, believes that most shippers "have a sincere desire to be good partners and recognize that shippers and carriers have to collaborate more closely." This is crucial because the current market uncertainty makes good carrier-shipper relationships more important than ever before. "We can overcome that better together," he says.