We use cookies to provide you with a better experience. By continuing to browse the site you are agreeing to our use of cookies in accordance with our Cookie Policy.
Home » Logistics executive Richard Murphy dies at 67
Forward Thinking 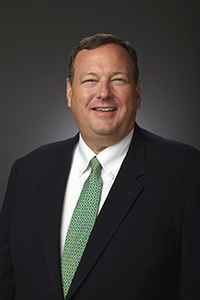 Logistics industry leader Richard Murphy is being remembered as "a modern-day Renaissance man" whose passions spanned teaching, landscape architecture, and rock n' roll before he passed away on July 4 at the age of 67.

As president and CEO, Murphy helped shepherd the firm's growth from its launch in 1904 "with two horses and a wagon" to its current identity. Now known as Murphy Logistics Solutions, the business operates 14 facilities with 2.8 million square feet of storage and has some 200 employees in Minnesota and Missouri.

Murphy began his career in quite a different sector from logistics, however. One of his first jobs was as a seasonal worker at a landscape company, and he stuck with the field for decades, training as a landscape architect at the University of Minnesota and at Harvard University's Graduate School of Design, according to a statement from the company. He forged a successful career in landscape architecture, teaching the topic at the college level before family duties called him back to logistics.

Returning to Minneapolis, Murphy took over the family business at a time when it was struggling, and rose to the challenge, the company said. His landscape architecture experience had taught him to be a problem solver and a shaper of the environment, and Murphy soon turned around the business, delivering year after year of profitable growth.

His background sparked a lifelong love of conservation, and Murphy became a leader in the growing "green" movement of sustainable business practices, as he once described in an interview with this magazine. In his frequent speeches to industry, business, and education audiences (he eventually taught for 25 years), he was fond of pointing out that warehousing and logistics had an environmental footprint of five billion square feet under roof - or enough to create a four-foot walkway between the Earth and moon, the company said.

Murphy saw these roofs as a perfect combination of environmental opportunity and profitable return on investment (ROI), installing solar panels on his warehouses and planting native prairie species on the surrounding campuses outside. The initiatives have created more than $1 million in ongoing savings and established him as a pioneer in sustainability. "This process taught me to use my business brain and approach on all things environmental," the company quoted Murphy as saying. "In other words, our sustainability initiatives had to make sense from two perspectives: one, that they be good for the environment, and two, that they be good for the business. Without a sustainable, profitable business, you have nothing."

When he wasn't saving the Earth and jump-starting his business, Murphy loved to attend live rock concerts and to travel the world. Those hobbies earned him many friends, including Mitch Mac Donald, group editorial director for this magazine and the president and CEO of its parent company, Agile Business Media LLC. The two men shared a love of live music, and as recently as June, Murphy was ecstatic about his plans for the next few weeks. According to Mac Donald, Murphy was thrilled to be holding concert tickets to see the Rolling Stones, Lovin' Spoonful's John Sebastian, and The Who.

"Richard was perhaps my best reminder that we work in a business of great people," Mac Donald said. "His business acumen was unquestioned. He led the way when it came to making environmentally sound business practices fiscally sound as well. As a person, his integrity, kindness, and wit were at a level to which we should all aspire."

Another friend was Michael Mikitka, CEO of industry group the Warehousing Education & Research Council (WERC), who recalled Murphy's commitment to his community and his efforts to make their warehouses "neighbor-friendly." "It was always a pleasure to work with Richard. He was very passionate about the industry and his passion was contagious... he could energize the group," Mikitka said.

Murphy shared that energy with many professional groups, serving as a chair of the Council of Supply Chain Management Professionals (CSCMP) and as a board member of the International Warehouse Logistics Association (IWLA), among many other titles.

Following Murphy's death, Murphy Logistics Solutions has named Tom Griep, chief financial officer, as interim chief operating officer to oversee day-to-day operations. The board, under the chairmanship of fifth generation family member Alexandra Murphy, will continue to be focused on the future of Murphy as a family-owned enterprise. "Our family is extremely pleased with the business and proud of the family values that he instilled in the culture, and we intend to continue to operate the business as a privately held enterprise," Alexandra Murphy said in a statement.

Part of Murphy's legacy will be sustainability, both of the company's success and of its environmental record. "I think it's important to spread the gospel—here's a little company doing these things," he said in a statement released today. "If we can do it, they can do it. And if everyone would do it, the world would be a better place."

Walmart installs tracking tablets in the 9,000 tractors of its private fleet