We use cookies to provide you with a better experience. By continuing to browse the site you are agreeing to our use of cookies in accordance with our Cookie Policy.
Home » High-flying bird: interview with Keller Rinaudo
Dialogue: A conversation with an industry leader 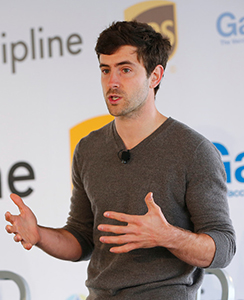 Few people are fortunate enough to combine their job with their passion. Keller Rinaudo is one of them. Rinaudo is CEO and cofounder of Zipline, a company that builds autonomous drones designed for delivering medical supplies to remote parts of the world.

The Harvard University-educated Rinaudo started his career as a software engineer and a professional rock climber. For a time, he built computers out of RNA and DNA to operate in human cells as molecular doctors. Then, he discovered the wonderful world of logistics and the possibilities of using new technologies to deliver medical supplies to all of the world's inhabitants, wherever they may live.

San Francisco, California-based Zipline employs 40 aerospace and software engineers and is funded by an impressive slate of investors, including Sequoia Capital, Google Ventures, Paul Allen, Jerry Yang, and Stanford University. The tech firm builds and operates 40-pound battery-powered drones that look like small airplanes. The drones are catapult-launched and fly to remote destinations to make deliveries by paper parachutes. They then return to the distribution center, where they fly into a large net or are caught by a tailhook and are quicklymade ready for further deliveries. (You can watch a video of a drone delivery on the company's website, www.flyzipline.com.)

NAME: Keller Rinaudo
TITLE: Chief Executive Officer and cofounder of Zipline
EDUCATION: Artium Baccalaureus (Bachelor of Arts) in economic and biotechnology from Harvard University
EXPERIENCE: Chief executive officer of Zipline, where he oversees a team of 100 flight engineers and operators formerly of companies including SpaceX, Boeing, and Google based in the San Francisco Bay area and Rwanda; software engineer; professional rock climber; as a student at Harvard, he built computers out of RNA and DNA that can operate in human cells as molecular doctors
RECOGNITION: Published research on RNA and DNA computers in Nature Biotechnology, becoming one of the youngest first authors in the publication's history

Zipline's first major project was partnering with the government of Rwanda to use its drones to make last-mile deliveries of blood to remote transfusing facilities. From its DCs, Zipline currently delivers about 30 percent of the national blood supply of Rwanda. The long-term vision for this project is to be able to swiftly reach each of Rwanda's 11 million citizens with any essential medical product they need, regardless of how remote they are.

Rinaudo recently sat down with CSCMP's Supply Chain Quarterly Editorial Director David Maloney to discuss this ground-breakingventure. The following is an edited version of their conversation. To watch the full interview, go to https://www.supplychainquarterly.com/video.

Q: What made you decide to zero in on health care logistics for Zipline's first drone deliveries?

Health care logistics was a really good place for us to start for a number of reasons. First of all, every delivery is potentially saving a human life. Second, health care products are obviously urgently needed, and logistics is a really important part of making sure that doctors have what they need to treat patients. Plus, the health carelogistics market itself is a huge US$7 billion market, and it's one that, while it functions well in developed countries, really doesn't function well in a lot of other parts of the world. There is a huge opportunity to both push the industry forward and also save lives.

Q: Why was Rwanda chosen?

We wanted to find a country that was small enough that we could get to national scale quickly and had a government that was making active investments in technology and health carefor its citizens. Rwanda really fit that bill. So, in partnership with Rwanda's administrative health [ministry], we've been able to turn Rwanda into the first country to achieve universal health careaccess for all. They have been able to put every single one of their citizens within a 15- to 25-minute delivery of any essential medical product.

Q: Your drones sometimes have to fly over populated areas to reach patients in remote locations. Some people have questioned the safety of drones flying over people. Is that a concern for you as well?

When we're flying, what's important to us is not just saving the life of the person that we're delivering for, but also ensuring that we're safe for the people we're flying over—the people who live in the towns and cities that we fly over on a daily basis. It's really important that these vehicles be able to operate at a similar level of reliability as general aviation aircraft.

Q: Could you describe just how the vehicles fly and make their deliveries?

The user experience of receiving a delivery from Zipline is very simple. Any doctor or health worker can use a cellphone to send a text message to place an order. When the distribution center receives that text, Zipline's team will basically pull the product from stock and load it into one of our aircraft. That aircraft is then launched from the distribution center, and it flies autonomously to the destination's GPS coordinates.

Q: So, no one is controlling it? It is all programmed electronically and by computer?

Exactly. The plane is flying itself using a flight control algorithm. It will descend to about 30 feet off the ground, and then we drop the package using a really simple paper parachute. That enables us to deliver every shipment right into the receiver's "mailbox," which is an area about the size of two parking spaces on the ground. The plane will turn around, come home, and land at the distribution center. It is ready to fly again a few minutes later.

Q: Have you had any complications with your deliveries in Rwanda?

We've made tens of thousands of deliveries, and we've never lost a vehicle. We design redundant systems into every level, whether it's the flight controls, the avionics, or the way the vehicle is mechanically engineered.

Q: And these are delivery vehicles that your company has created?

Yes. We build everything from scratch. We also have a system on board so if the vehicle can't make it back to the distribution center, it can actually use a parachute to bring itself to ground gently. So, this is how we ensure that these vehicles are 100-percent safe for the people they're flying over.

Q: How many types of those deliveries are you making a day in Rwanda?

We just agreed to an expansion of our services in Rwanda and have added a second distribution center. That will allow us to do about 200 deliveries per day countrywide.

Q: Are you looking to expand to other nations with this technology?

Yes, rural health care is a global problem. A lot of other countries are now looking at Rwanda as a role model and figuring out how they can leverage similar technology to improve their own health care systems. So, we will be launching in several other African countries in the next six months.

And here in the United States, we will soon begin making lifesaving medical deliveries in rural North Carolina. We're working through final details with the Federal Aviation Administration, the state of North Carolina, and our partners on the ground. We expect to begin deliveries there beginning in the second quarter of this year.

Q: There's been a lot of talk in the logistics industry about drones being used for deliveries. Can you see a day when that technology will be used on a regular basis for small parcel deliveries, such as e-commerce orders?

Yes. The funny thing is, it is already happening at scale today, just not in the United States. When it comes to e-commerce, we think it's inevitable that this type of technology will have a big impact on how e-commerce orders are delivered, but that's not the first place the technology is going to start. It makes more sense to start focused on lifesaving applications. Then I think after that, you'll see a lot of high-need, urgent applications that might be more industrial applications. And then in the long run, you'll start to see this technology permeate the really big parcel-delivery market that's currently served mainly by UPS and FedEx.