We use cookies to provide you with a better experience. By continuing to browse the site you are agreeing to our use of cookies in accordance with our Cookie Policy.
Home » ProMat keynote addresses the gender gap
Forward Thinking 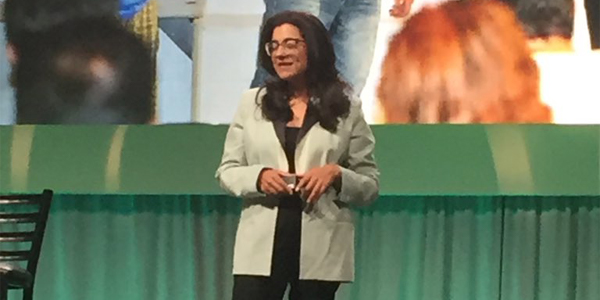 A crucial part of getting more women into tech positions is changing the culture and the perception of who a computer scientist is, Reshma Saujani told the crowd at Tuesday's ProMat keynote.

As companies struggle to find qualified candidates to fill supply chain jobs up and down the corporate ladder, many are looking to an untapped resource: women. According to research by AWESOME (Achieving Women's Excellence in Supply Chain Operations, Management, and Education) and the analyst group Gartner, in 2018, on average, 14 percent of companies reported executive-level supply chain positions being held by women.

One model for attracting talented young women to the field that the industry might consider copying is Girls Who Code. This nonprofit organization is boosting the number of women in computer science through summer immersion programs and clubs offered for girls age eight and up.

The founder and CEO of Girls Who Code, Reshma Saujani, told the story of the organization's formation and described the effect the group has had on the 90,000 girls who have participated, during Tuesday's keynote session at ProMat, MHI's material handling and supply chain trade show.

The impetus for the organization came when Saujani ran for Congress and visited many schools as part of her campaign. She saw many robotics clubs and computer science clubs during those tours and found herself wondering "Where are the girls?" Indeed, the percentage of women in computer science has been dropping since 1995.

The Girls Who Code programs are helping to build a pipeline of talent. Currently, there are 80 seven-week summer immersion programs and 6,000 Girls Who Code clubs. Half of all participants are living under the poverty line, and half are black or Latina. According to Saujani, alumnae of the programs are declaring computer science majors in college at a rate that's 15 times the national average.

A key part of getting more women into tech positions is changing the culture and the perception of who a computer scientist is, Saujani says. At the start of each program, when the girls are asked to envision a computer scientist, they usually describe a "dude wearing a hoodie, who hasn't showered in awhile and works in a basement," she said. "They don't even want to be friends with that person, let alone be that person."

With the supply chain field facing a similar talent shortage and similar misperceptions (or lack of perception) of what supply chain managers do, could a "Girls Who Move" organization be on the horizon?