We use cookies to provide you with a better experience. By continuing to browse the site you are agreeing to our use of cookies in accordance with our Cookie Policy.
Home » Rising above the froth: ProMat keynote focuses on practical realities of blockchain
Forward Thinking

Rising above the froth: ProMat keynote focuses on practical realities of blockchain 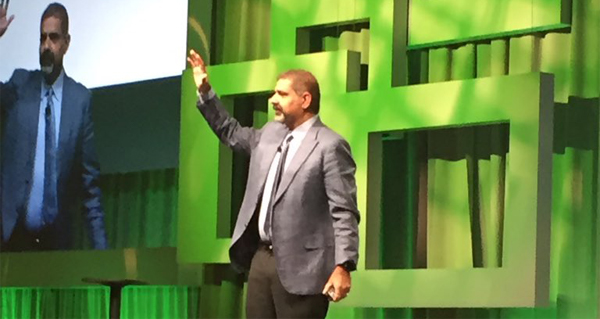 Blockchain may be the hottest technology on the block, but it can be hard to get concrete, real-world info on how to apply it in the supply chain space. Harvard Business School Professor Karim Lakhani looked to counterbalance that trend with the opening keynote panel session that he moderated at MHI's ProMat show Monday.

"There's a ton of hype about blockchain, but most of the language is pretty frothy," said Lakhani, as photos of past media coverage of the distributed ledger technology flashed on the screen behind him.

Instead, he pressed the panel—which consisted of representatives from Cargill, Everledger, and Intel—to discuss the current reality of blockchain. Each of the panelists gave specific examples of how their companies are using or testing the technology today. Food and agricultural products company Cargill is committed to using blockchain to improve food safety and is currently piloting it to improve the traceability of its turkey products. On the provider side, Everledger began in 2015 as a technology platform that used blockchain for tracing and ensuring the provenance of diamonds. (The company is now expanding into other gemstones, fine art, and wine.) Intel has been working with a group brought together by software giant SAP to look at using the technology for cross-border trade.

While implementations are proliferating, David Cecchi, senior director of enterprise data at Cargill, warns companies not to see blockchain as a silver bullet that can solve all their problems. "We do believe that [blockchain] is for real, but we are deeply skeptical of the overapplication of blockchain as a general enabler of all things," he said.

A key step to implementing blockchain, then, is clarifying what the implications of the technology may be and managing user expectations, according to Cecchi. Some people are under the misperception, for example, that blockchain can establish the truth about transactions. "Blockchain doesn't know the truth," he said. "Instead, it's like writing with a pen in a perfect ink that no one can change or erase. But you can still write the wrong stuff down."

In addition, it's important to realize that blockchain alone cannot typically solve the problems that an industry is trying to address, such as food safety or establishing the origin of high-value, unique objects like diamonds, said Leanne Kemp, CEO and founder of Everledger. In the case of establishing the provenance of diamonds, Everledger uses blockchain in conjunction with scanning technologies.

Another stumbling block to implementing blockchain is that it requires customers, suppliers, and sometimes even competitors to sit down and agree on how the market operates—how transactions and processes take place—and then write that down in code. For that standardization to happen, there has to be a certain amount of process rigidity, according to Cecchi. He says it's like the pain many organizations underwent to standardize their internal processes as they implemented an enterprise resource planning (ERP) system, only for the entire industry.

Industry consortia and working groups are essential to bringing together peers and establishing these standards and protocols, said Michael Reed, director of the blockchain program at Intel Corp.

How long will it take before we fully experience the disruptive nature of blockchain? It may not be as soon as promoters of the technology would like you to believe. Lakhani instead likens blockchain to TCP/IP, one of the foundational technology protocols that makes the Internet and distributed computing possible. He points out that it took 30 to 40 years to go from simple e-mail systems to the applications that we have today.

"This is a foundational technology rather than a disruptive technology," he explained.

Fred Smith is not worried about Amazon