We use cookies to provide you with a better experience. By continuing to browse the site you are agreeing to our use of cookies in accordance with our Cookie Policy.
Home » E-commerce firms flex their muscles on DC site selection
Forward Thinking 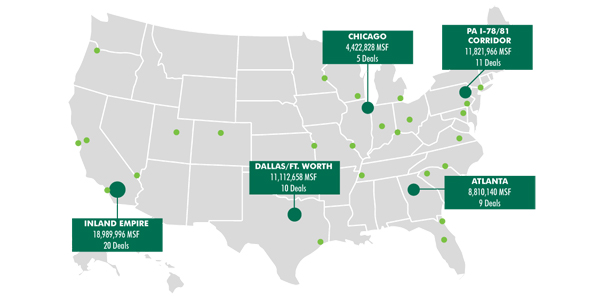 E-commerce and logistics companies are claiming a growing share of the country's largest warehouse leases, a trend which gives them more leverage in choosing the optimal sites for locating their DCs, according to a study by CBRE Group Inc.

The e-commerce and logistics firms tracked by CBRE have growing influence over U.S. warehouse construction in comparison to other industrial leasing clients in industries such as manufacturing, food and beverage, technologyÂ and retailing, the report showed. That change is measured by e-com companies' rising share of the 100 largest industrial leases signed in 2018 compared to a year earlier, Los Angeles-based realÂ estate and logistics services provider CBRE said.

CBRE found that 61 of the largest 100Â leases in 2018 were signed by e-commerce companies and logistics firms, representing a total of 61.5 million square feet. Both those figures were up from their 2017 marks, when the same types of firms signed just 52 of the largest leases for a cumulative 43.2 million square feet of space, CBRE said. And that momentum is expected to continue in 2019, as both the e-commerce leasers and the logistics firms in the study—led by third-party logistics providers (3PLs)—ride a steady wave of online commerce.

"These are among the leading markets that offer the high-quality logistics facilities that many of theseÂ e-commerce users are seeking," CBRE's Americas Industrial & Logistics InvestorÂ Leader Chris Zubel said in a release. "This activity builds upon itself when a region provides the transportation access, qualifiedÂ labor pool, and state-of-the-art real estate that many e-commerce users need."

In choosing their sites, e-commerce companies also need to strike a balance between open, rural spaces and proximity to urban consumers, said Lior Elazary, CEO and co-founder of warehouse automation vendor inVia Robotics Inc. "Companies have been setting up warehouses closer to where people live," but not in densely developed cities, Elazary said in an interview. "They can't set up a 1.2-million square foot warehouse in a city, but they also can't set it up out in the country, because then it's more than an hour away and they can't provide same-day shipping."

Innovation Stories from the Leading Edge

Webcasts
Distribution is transforming and writing the stories that will create a resilient, responsive, and regenerative supply chain. Many stories are to be told, including operating in a connected network, the cause of human flourishing, and creating space for financial and social wealth. In his second session at CSCMP...