We use cookies to provide you with a better experience. By continuing to browse the site you are agreeing to our use of cookies in accordance with our Cookie Policy.
Home » Global trade growth to slow in early 2019, DHL study forecasts
Forward Thinking

TheÂ volume of containerized international trade will continue to expand for theÂ next three months, butÂ its growth rate will shrink in the face of politicalÂ challenges like U.S. tariffsÂ on Chinese goods and the U.K.'s pending exit from theÂ European Union,Â according toÂ a forecast released today by German transport and logistics giant Deutsche PostÂ DHL Group. 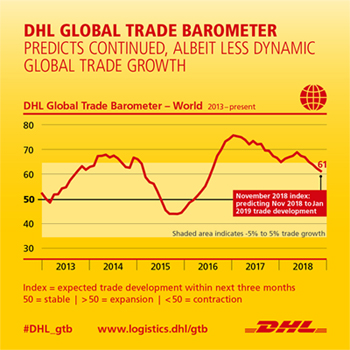 The study isÂ basedÂ on large amounts of logistics data that are evaluated with the help ofÂ artificial intelligence (AI), DHL says. Judging by the results, theÂ indicesÂ for all seven countries thatÂ constitute the index are above 50Â points, although those numbers have each shrunk since the forecast's previousÂ release in September. Those figures forecast that expectedÂ trade developmentÂ over the next three months will be highest in India (with an index of 75),Â followed by South Korea (64) and the U.S. (61). The other countries tracked areÂ China (58), Japan (58), Germany (56), and the U.K. (53).

"The DHL Global Trade Barometer clearly shows that theÂ state of global trade remains solid. Both air and ocean trade continue toÂ grow around the world," Tim Scharwath,Â CEO of DHL GlobalÂ Forwarding, Freight, said in a release. "However, given theÂ smoldering trade conflicts, especially between the U.S. and China,Â and economists'Â expectations that the global economy could coolÂ down, it is not entirely surprising that trade momentum has weakenedÂ slightly."

According to the latest DHL report,Â the predicted deceleration of worldwide trade growth isÂ attributable to declines in both containerized ocean freight andÂ international airÂ trade, as markets retreat from an exceptionally busy year inÂ 2017.

"At the end of the day, we'll still have growth, butÂ temperatures are getting back to normal in a way," Scharwath said in anÂ interview. "Global trade has been quite extraordinaryÂ in several quarters overÂ the past two years, but businesses like it better when that growth is spreadÂ evenly across multiple quarters, rather than having spikes up and down."

DHL first launched the index in January, saying the toolÂ could helpÂ both DHL and its customers to save money by predictingÂ changes in freight volume, then adjusting toÂ economic trends by applyingÂ changes in prices, transportation modes, and trade routes.

GXO pairs with investment firm to back logistics tech startups