We use cookies to provide you with a better experience. By continuing to browse the site you are agreeing to our use of cookies in accordance with our Cookie Policy.
Home » Ball State University names logistics center for alum who went on to lead UPS
Forward Thinking 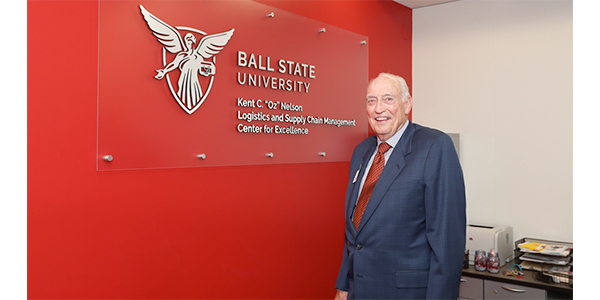 Ball State University said Monday that it has dedicated its Logistics and Supply Chain Management Center to an alumnus of the school who capped off a long career in the logistics industry by serving as the CEO oftransport and logistics giant UPS Inc.

The Muncie, Ind.-based university unveiled the Kent C. "Oz" Nelson Logistics and Supply Chain Management Center on Sept. 21 to honor the esteemed graduate for his remarkable career and lasting impact on the school and its Miller College of Business.

Nelson graduated from Ball State with a bachelor's degree in business administration in 1959 and received an honorary doctorate of law in 1994. He worked for Atlanta-based UPS for 37 years, culminating as chairman and CEO from 1989 to 1996.

The naming of the center after Nelson is a result of a $1.2 million campaign that included support from the Avis Industrial Corp. and a gift from Nelson himself. The 1,500-square-foot center supports Miller College's logistics and supply chain management program, and features the Allegion Logistics Lab, which provides students with 24-hour access to specialized logistics and management software and 36 student workstations for homework, studying, and projects.

Allegion is an Irish producer of safety and security products with its U.S. offices in Carmel, Ind., whose senior vice president and chief human resources officer, Shelley Meador, is also a Ball State graduate.

"Through hard work, education, and the support of family and friends, Oz built a successful career that enabled him to influence the way the entire world ships packages," Ball State President Geoffrey S. Mearns said in a statement. "And thanks to his leadership, UPS made major investments that improved its technological capacity and broadened its global position."

Since retiring from UPS, Nelson has worked for a variety of volunteer organizations, including serving on the board of trustees for the Carter Center, a nongovernmental organization whose mission is summarized in its motto: "Waging Peace. Fighting Disease. Building Hope." "In this role, Oz worked closely with former President Jimmy Carter—a man whose character, courage, and civic mindedness mirrors the qualities of the alumnus we are recognizing today," said Mearns, who read a congratulatory letter from the nation's 39th president.

"In my 'later years' I have thought about the positive effect my undergraduate years at Ball State have had on my life," Nelson said in a statement. "Those years deepened my feelings about social interaction, being a team player, and what real leadership was. From fraternity involvement, participation in sports, service on university and other organizations projects and committees, including giving back to community, I learned the value of group goals."

Trucking market slumped under weight of diesel prices in March