We use cookies to provide you with a better experience. By continuing to browse the site you are agreeing to our use of cookies in accordance with our Cookie Policy.
Home » Hot, hot, hot

Echoing the title lyrics of Buster Poindexter's 1987 silly dance hit, we can only describe the current real estate market for warehousing and distribution centers (DC) as "Hot, Hot, Hot." Warehouses, historically viewed only as cost centers where goods sat waiting to be shipped, are now being seen as red-hot profit centers not only by our site-seeking warehousing clients but also by real estate developers and investors, who have moved into the warehousing sector with gusto.

This shift has fueled tremendous growth in demand for warehousing space and a rise in rents from coast to coast. In the hot northern New Jersey market, for example, the average price for a large parcel of prime DC land is approaching $2.0 million an acre, up 18 percent from a year ago. Northern New Jersey's average warehouse lease rate is approaching $12.00 per square foot. In California's Inland Empire, DC land prices are also soaring, up over 25 percent from last year and reaching levels of $900,000 to $1.0 million per acre. 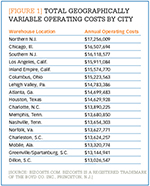 This growth is not expected to slow any time soon. In the DC sector, we forecast that overall costs will increase by 9.9 percent in 2018. Figure 1 shows the total annual operating costs for a representative 750,000-square-foot warehouse employing 200 hourly workers for a series of warehousing hot spots in the United States. Costs include hourly labor, benefits, land, construction, property taxes, and utilities.

These numbers indicate that tight markets are the rule of the land now, as the availability of prime, fully serviced parcels are the lowest we have seen since 2001. Although new DC construction has exceeded 200 million square feet during the past year, it has not at all kept pace with net absorption.

This new demand has not gone unnoticed by developers and the investment community. The new DC value proposition is generating superior investment performance in comparison to other major commercial property types. Investors are bidding capitalization rates (the potential rate of return on the real estate investment) down to new all-time lows, and financial analysts are quoting total returns on DC properties at rates twice those of other commercial property types. DC real-estate investment trusts have seen a 24-percent return in 2017, according to the real estate advisory service firm Green Street Advisors, exceeding single-digit returns recorded by other sectors such as hotel, apartment, and office.

The impact of e-commerce

This growth is being largely fueled by the booming e-commerce sector. More stock devoted to e-commerce necessitates bigger warehouses with higher ceilings that are closer to consumer demand.

According to Boyd's BizCosts.com reports, which look at the comparative cost of business across the United States, the size of the average U.S. warehouse completed so far this year was 197,000 square feet, double the size from a decade ago. Driving the size explosion is the "endless aisle" concept, meaning that while a DC client might stock 50,000 stock-keeping units (SKUs) in its brick and mortar stores, it might offer 15 times as many items on its e-commerce website.

The endless aisle concept is also forcing warehouses to go higher. Our data shows that clear ceilings for new warehouses in the United States areover 20 percent higher than they werea decade ago. Higher ceilings allow warehouses to house mezzanine levels and space for larger material handling systems—both of which are in greater demand to keep up with e-commerce fulfillment. Since Amazon acquired mobile robot manufacturer Kiva Systems in 2012, interest in using robots in warehouses has grown, and more robot makers have entered the market, including Fetch, IAM, 6 River Systems, RightHand, and others. All of these automated systems require more space, not to mention thicker concrete floors for support.

Additionally, the "last-mile" shipping demands brought on by e-commerce are driving increased interest in urban industrial real estate, which historically has been long ignored by developers. The reality, however, is that very little infill space exists in most urban markets to accommodate the requirements of e-commerce, including vehicular traffic and employee parking associated with labor-intensive tasks like picking, packing, and gift-wrapping. Older urban buildings with ceiling clear heights of less than 30 feet don't make efficient use of cubic storage and limit the use of modern, automated material handling systems. The upshot of all of this is the dearth of suitable last-mile real estate in urban centers and when we find it, it is expensive, very expensive.

Our instant gratification economy and the expectations of consumers and businesses for shorter and shorter delivery times have also led to a greater interest in air transport, and subsequently locating DCs near air cargo hubs. Air freight's predictability and short lead times can cut into the cost of maintaining higher than necessary inventories at our clients' warehouses. Additionally, renewed interest in air transport is being spurred by growing demands abroad for U.S.-branded food products and pharmaceuticals, which require cold chain delivery over great distances.

Another trend that is also beginning to impact our warehousing site selection work is the growing reshoring movement. Today, we are finding that our supply chain clients' demand for Class-A warehouse space and acreage is bumping up against growing real estate demands from the re-energized U.S. manufacturing sector. Lower cost and plentiful U.S. energy supplies, as well asthe U.S. federal government's new tax cuts and regulatory pullback, have generated a greater sense of economic confidence among U.S. manufacturers. In recent months, companies like Boeing, United Technologies, Ford, General Motors, Caterpillar, AT&T, GE, Apple, and others have brought manufacturing jobs back to the United States. The upshot of this reshoring trend is that our site-seeking warehouse clients are facing heightened competition for prime industrial real estate.

As companies decide where to locate their distribution facilities in 2018, they must take into account some of the trends, challenges, and technologies noted here. I have no doubt industry professionals are up to the task. Looking ahead, new rules in global commerce and tariffs just now playing out will do much to shape the supply chain landscape in 2019 and beyond.