We use cookies to provide you with a better experience. By continuing to browse the site you are agreeing to our use of cookies in accordance with our Cookie Policy.
Home » Ready to rebuild

On the 27th of July, the U.S. Bureau of Economic Analysis issued its first official estimate of second-quarter gross domestic product (GDP). It came in at a 4.1-percent annualized growth rate—the fastest growth rate since the third quarter of 2014. Although some of this strength was attributable to payback from a weak first quarter and an outsized surge in soybean exports, there is no denying that the U.S. economy is churning at a robust pace.

Labor markets have been historically strong; as of the time of this writing, 2.4 million additional people have attained jobs in the last year, the unemployment rate has fallen to 3.9 percent, and the employment cost index for wages and salaries (that is, nominal wages) grew 2.8 percent year-over-year as of the first quarter, the fastest pace in nearly ten years. Household net worth was up 7 percent over the year before in the first quarter, surpassing the US$100 trillion mark for the first time. Survey readings of purchasing managers in the manufacturing sector are robust. Measures of consumer mood are holding at historically lofty levels, and growth of total retail sales in June over the year before was the fastest since early 2012. Across the economy, indicators are consistent with a firm expansion. 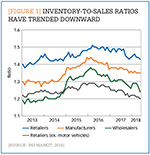 In spite of the second quarter's strong reading on GDP growth, it could have been higher were it not for the continued depletion of inventories. Companies decreased their inventory investment, which dragged down real (or inflation-adjusted) GDP growth by 1.1 percentage points, continuing a pattern of inventory drawdowns that has generally held since mid-2015. Businesses have been gradually decreasing their holdings of inventories ever since a rapid buildup in 2015 that was caused by a "perfect storm" of factors, including a strong U.S. dollar, which decreased the competitiveness of U.S. exports abroad, and a decline in global oil and commodity prices, which reduced spending on equipment and structures in the energy industry. Additionally, labor disruptions occurred at customs ports on the U.S. West Coast, which interrupted the flow of goods and then caused a glut of supply when they were finally resolved in late February 2015.

Numerous factors have contributed to this drawdown. First, holding onto inventory has become relatively pricier. Although economywide inflation is positive and currently accelerating, the cost of goods (as opposed to services) is declining; excluding food and energy, year-on-year growth of the price index for goods has been negative every month since 2012. Businesses therefore have sought to keep as little supply on shelves as possible to avoid making a loss. The growth of electronic commerce, or the "Amazon effect," is also tamping down on inventories, as online suppliers need to maintain less stock than brick-and-mortar establishments to ensure that demand can be met. In the auto sector, inventories of light vehicles were pared down sharply last fall by elevated replacement demand stemming from hurricane damage. Finally, robust consumption has helped to take some supply off of grateful businesses' hands. According to the National Federation of Independent Business, the net percent of small businesses that believed that inventories were too high was zero in June, the lowest proportion since September 2014—a sign of strong sales. The net percent of owners planning to build inventory was the highest since November 2017.

What's on the horizon?

As strong as economic growth has been, IHS Markit believes that the second quarter of 2018 represented the low point of the inventory cycle, and inventory accumulation will grow during the second half of 2018. We believe that current inventory levels are unsustainably low and that the second quarter's overall nonfarm inventory-to-sales ratio of 2.32 is beneath the optimal level. In our forecast as of this writing,real GDP growth overall is estimated to be 3.2 percent for 2018 (from Q4 2017 to Q4 2018), which would make it the best year since 2004. With consumption set to continue at a robust pace—fueled by gains in employment, higher real disposable (after-tax) incomes, and home values—we expect back-to-school retail sales this year to rise 5.2 percent compared to the year before, which would be the best year of growth in school sales since 2011.1 In this environment, businesses must add to their inventory holdings, or shelves of materials and supplies will become uncomfortably bare. For this reason, we expect inventory investment to rise over the next four quarters to contribute an average of five-tenths per quarter to annualized GDP growth. After that, we believe inventory investment will peak in the third quarter of 2019 (at an annualized rate of about US$86 billion chained 2012 dollars) and return to an average of US$60 billion in 2020. (See Figure 2.) This projection of strong inventory investment will stabilize the inventory-to-sales ratio and begin raising it toward our estimate of the optimal level in 2019.

Although our forecast calls for the pickup in inventory investment to progress at a healthy rate, there exist some signs of a possible disruption. Both the Markit PMI (Purchasing Manager Index) and the Institute for Supply Management's reports on manufacturing are currently showing supplier delivery issues. When purchasing managers face supply issues, they often broaden their searches and buy slightly more than they plan to use "just in case." In the past, this has resulted in unsustainable inventory builds like the one seen in 2015—and there is the potential that it could result in a similar boom/bust scenario in the future.

There is another reason why businesses may look to stock up on inventories in the short term: tariffs. The Trump administration, as of this writing, has already enacted tariffs on imported steel, aluminum, washing machines, and solar panels, covering approximately US$57 billion worth of imported goods; it has also targeted a broad collection of goods specifically from China that amounts to a further US$34 billion. These totals are dwarfed by the list of tariffs that are currently under review or threatened, which as of this writing would collectively cover around an additional US$624 billion in goods. Although the existing tariffs were ostensibly intended to protect domestic primary metal producers, more American industries are users than producers of metals—the machinery, farm, construction, and transportation industries, for instance. Tariffs serve to both raise the costs of inputs for these industries and limit their supply; increased costs also filter down to consumers. Already, rising materials costs have become visible in consumer prices; the Consumer Price Index for major appliances grew 5.6 percent versus the year before in June, the most since before the Great Recession.

The fear of tariffs—those enacted and those threatened—means that businesses may anticipate rising costs in the future and significantly build up their inventories in the short run to protect against these price hikes. Both to shore up their bottom line and to ensure adequate supply, businesses in affected industries may double down on inventory investing in the upcoming quarter, shifting this investment earlier and moving it out of the fourth quarter and those following. The consequence would be another boom for inventories, to be followed by another bust—especially if many of the threatened tariffs really do become reality.

E-commerce in the age of COVID-19