We use cookies to provide you with a better experience. By continuing to browse the site you are agreeing to our use of cookies in accordance with our Cookie Policy.
Home » A quick sea change

Last year in the state of logistics special issue of CSCMP's Supply Chain Quarterly, we discussed the unprecedented amount of change that was disrupting the container shipping industry—carrier bankruptcies, mergers, and a large-scale reconfiguration were among the top trends that were reshaping the business. This year, we are seeing that rate of change accelerate as three key macro-currents exert their pull at a dizzying pace: the continued restructuring of the industry, the escalation of tariffs, and the relentless march of technological innovation.

An industry in flux 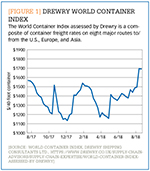 In the past year, ocean transportation has seen many significant changes in how the industry is structured. One of the biggest changes involved the industry going from having four major carrier alliances, which allow multiple carriers to share assets and services, down to three. This restructuring brought some level of competitive parity to carriers large and small by enabling the smallest carriers to build scale through the pooling of assets and service offerings.1

Mergers also accelerated over the past year and are continuing into the present day. The container shipping companies COSCO and OOCL, for example, are set to merge this summer, and Ocean Network Express (which was created as a merger of Japan's "Big Three" shipping lines—Nippon Yusen Kaisha, Mitsui O.S.K. Lines, and K Lines) started operating as a single company in Q2 of 2018.

According to the analyst firm Alphaliner, once the COSCO-OOCL deal is complete, the top ten ocean carriers will control 31 percent more shipping capacity than the top ten carriers managed at the beginning of 2017.2 These same ten carriers will also control about 83 percent of the market, up about 10 percent during the same time period.3

As the ocean industry restructured, pricing volatility continued, driven by traditional seasonality. However, the price range was less extreme last year than it had been in the recent past. During the 2016 calendar year, rates ranged from US$650 per 40-foot equivalent unit (FEU) container up to US$1,850 per FEU, according to the Drewry World Container Index. Between July 2017 and July 2018, the range was limited to US$1,125 per FEU to US$1,600 per FEU (see Figure 1). While there is still a large swing on a percentage basis, the slightly more constrained range has led to more stable contract rates and service levels.

The industry is also seeing restructuring in terms of the mix of U.S. ports that are being used. Looking at volumes in May 2018, container ports on all three U.S. coasts saw import and export volumes grow relative to May of 2017. The expansion of the Panama Canal in the middle of 2016, however, has boosted volumes into the Gulf and U.S. East Coast ports, as the larger vessels allowed through the canal brought efficiency and capacity into those markets. Houston, Texas, saw the fastest growth of any major container port, posting a 12-percent increase on the year. Meanwhile East Coast ports had import growth rates of 4 to 9 percent. Individual ports on the West Coast, however, saw mixed performance—Los Angeles, California, and Seattle, Washington, were down, while Long Beach, California, saw volume increases.

Market share is also being shifted from the West Coast to the East Coast. From May 2017 to May 2018, the West Coast lost 1 percent of the share of the market—moving from handling 58 percent of all U.S. twenty-foot equivalent unit (TEU) imports in May 2017 to 57 percent in May 2018. While the container volumes in the Gulf and East Coast markets are growing faster, the historical bias of flows through the West Coast gives those ports a significant leg up when it comes to market share.

While the forces within the industry seem to be settling around the new order, ocean shipping is poised to be rocked by macroeconomic forces in the near future. Trade wars seem to be the most likely outcome of the recent trend to elect nationalistic and populist politicians across the globe. The United States, for example, has imposed protective tariffs on imported steel and aluminum as well as imported solar panels and washing machines. In retaliation, most U.S. trade partners have acted against automobiles and airplanes/parts, soybeans and pork, and sales of scrap and waste.

These actions will have a significant impact on shipping, but the impact will unfold differently for different ocean modes and routes.

For example, the tariffs on steel and aluminum will mostly impact demand and rates for containerized and bulk shipping, as these are the primary ways that these commodities are shipped. However, the impact will be different for different lanes. The majority of the United States' steel imports come from Canada, Mexico, and Europe, which means that bulk and container shipping rates on these lanes may drop as demand falls.4 The tariffs, however, exempt Brazil, South Korea, Argentina, and Australia. Of these only Brazil and South Korea are major exporters today, so bulk and container shippers with volumes coming from those two countries might expect to see steadier pricing.

In some cases, the effects of one tariff will offset another. For example, the increases in containerized shipments of steel products from South Korea are likely to be offset by the tariffs for solar panels and washing machines, which are also primarily shipped in containers. The trade data provider firm Datamyne reports that the largest producer countries for solar panels are Malaysia, South Korea, and China; for washing machines, it's Vietnam and Thailand.5 It's very likely that we'll see a decrease in demand and potentially rates on the affected lanes.

In response to these U.S. tariffs, other countries are targeting some U.S. exports. China, for example, recently banned the import of waste, such as paper, plastic, and metals, for recycling. According to the Bureau of Transportation Statistics, paper and paperboard are the number-one containerized export commodity from the U.S.6 Demand for containerized shipping from the United States to China will also be affected by China's retaliatory tariffs on pork products. Actions by China on these cargoes will significantly disrupt the repositioning of empty containers for ocean container lines as well as cold chain container networks between Asia and the United States.

Meanwhile bulk shipping out the U.S. will also be affected by tariffs that have been placed on U.S. soybean exports, which are generally shipped in bulk. Soybean shipments make up around 2 to 3 percent of the world's dry bulk shipments, 25 percent of which originate in the United States.

Ocean shipping of automobiles will likely also be affected by trade actions. While there have been threats of actions in many different directions, so far, China has retaliated against U.S. automobiles, and the United States and Europe have threatened tariffs on one another. Automobiles are traditionally shipped by "roll-on/roll-off" or "pure car carrier" (PCC) vessels. The bulk of trans-Pacific automobile flows are on the eastbound side of the trade. Decreasing U.S.-to-China automobile flows will likely increase the cost of imported cars in the U.S., as the head haul flow makes up for the lost backhaul revenue. If the trans-Atlantic discussions result in reductions in exports on both sides, PCC operators are going to suffer as a result. Â

Another macroeconomic force, technological innovation, will also continue to play a disruptive role for the foreseeable future. The Ports of Los Angeles and Long Beach in California, for example, have invested in several technologies to drive more efficient operations. The Port of Long Beach has teamed up with GE Transportation to implement its Port Optimizer solution, which integrates manifest data across multiple parties to enable advance planning of labor and equipment needs. Another example is the revisions being made to PierPass' OffPeak program. PierPass is a not-for-profit entity that was launched in 2005 to reduce port congestion and improve air quality and security. Originally the OffPeak program charged a "traffic mitigation fee" on weekday daytime cargo moves to incentivize cargo owners to use off-peak shifts. Based on feedback from port users earlier this year, the program is moving away from the incentive pricing model and instead now requires that trucks set up appointments through the terminal operators' online appointment systems.

One area where the application of emerging technology has potentially hit a roadblock is on the blockchain front. IBM and Maersk have been partners for several years in the development of a blockchain for international shipment. Conceptually, having a single repository of international transport data—covering transportation as well as all the paperwork involved in global trade—could unlock significant benefits including standardization, efficiency, and transparency. However, earlier in the year, CMA-CGM and Hapag-Lloyd rejected the Maersk blockchain solution, saying that a joint industry standard was needed instead. Despite near universal acknowledgement of the positive use case for blockchain in shipping, implementation is likely many years away at this point.

While change in the ocean industry has always been the norm, the amount of transformation over the past few years has been unprecedented and seems to be accelerating. This means that shippers managing their ocean networks will have to stay on top of not only their own network and their carrier partners but also changes in the overall macro environment as the paradigms of international trade are rewritten.

1."Battle for US trades on after THE Alliance gets regulatory OK," JOC.com, Dec. 14, 2016, https://www.joc.com/maritime-news/container-lines/alliance/battle-us-trades-after-alliance-gets-regulatory-ok_20161214.html

Ocean
Joshua Brogan is a vice president in the Analytics practice of A.T. Kearney, a global strategy and management consulting firm.

One thing after another

Ready for the next wave of disruption?