We use cookies to provide you with a better experience. By continuing to browse the site you are agreeing to our use of cookies in accordance with our Cookie Policy.
Home » Multicolored bar codes could store three times the data as black and white
Forward Thinking 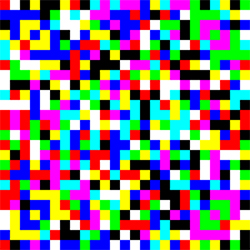 Researchers with the Association for Automatic Identification and Mobility (AIM) say they are drafting standards for a type of two-dimensional ba rcode that can store up to three times as much data as conventional bar codes by encoding data in a colorful matrix of dots instead of a typical black and white pattern.

The design is called JAB-Code, a tongue-in-cheek acronym for "Just-Another-Bar-Code," but supporters say it could have a big impact on applications such as embedding identity documents with unique biometric information like fingerprints or iris scans.

Current barcode standards used on documents such as birth certificates, graduation certificates, and visas have the storage capacity to record only basic identity data, requiring users to go online to verify them, according to Sprague Ackley, a fellow with Honeywell Sensing & Productivity Solutions and the chairman of AIM's Working Group One (WG 1) standards body.

However, a document printed with a JAB-Code pattern can hold about 300 bytes of data, roughly three times as much as conventional, black and white, 2-D bar codes, Ackley said in a webcast presentation released July 12 by AIM. That greater storage capacity could allow document holders to skip the verification step and immediately confirm that they are the true holders of their paperwork.

Researchers in the automatic identification and data capture (AIDC) field have been investigating versions of polychrome—or multicolored—bar codes since the 1960s, leading up to the most recent version, known as the Ultracode standard,Ackley said in the webcast.

Recent work done by German research organization the Fraunhofer Institutehas taken that concept a step further, defining JAB-Code as a pattern that can deploy many colors—four, eight, 16, or more—and permit a flexible format for its shape, Ackley said. A JAB-Code bar code can be printed in the shape of any combination of rectangles, such as a rectangle, a square, or a geometric U-shape.

Another trend that has helped JAB-Codes gain traction in recent years is the widespread use of consumer smartphones that contain the digital color cameras needed to read a multicolored code, Ackley said. A conventional barcode scanner records data only in black and white, he said.

The new codes' need for specialized equipment—such as color printers and color scanners—may restrict their applications in logistics, Ackley said in an email. "I cannot predict how the scanner market will react to this symbology," he said. "However, I can note that no color symbology has reached wide adoption in the past."

Because of that hurdle, JAB-Code will probably be adopted first in applications where companies are starting from scratch or were already planning a technology refresh, he said. One exception to that rule may be applications where government agencies promote or even require JAB-Code because of its utility in the proposed use on identity documents, he said.

Logistics technology providerÂ ZebraÂ Technologies Corp., a vendor of rugged mobileÂ handheld devices for barcode scanning and other applications, agrees. "There are some significant demands that reading color bar codes places on the scanner design and it is yet to be determined whether a potential increase in data density is worthwhile," Chris Brock, Zebra's senior director for advanced development, said in an email.

GXO pairs with investment firm to back logistics tech startups