We use cookies to provide you with a better experience. By continuing to browse the site you are agreeing to our use of cookies in accordance with our Cookie Policy.
Home » The biggest company you may not know all that much about
Forward Thinking

The biggest company you may not know all that much about 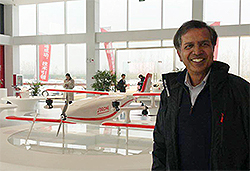 Consultant Satish Jindel poses next to a JD.com drone.

It's easy for brands to have their stories obscured by the mountain of press given to behemoths like Amazon.com Inc., UPS Inc., FedEx Corp., Walmart Inc., and Alibaba. But there's a company not especially well known outside its home market that appears to have put everything together in such a way that it may come to dominate everyone.

Its name is JD.com. Based in Beijing, it has, in the 14 years since it launched its e-commerce site, developed and executed such a formidable model that it could easily threaten the market share of any rival it chooses to take on. For now, JD remains China-centric, although it is expanding into Thailand, Indonesia, and Vietnam. It has no plans at this time to take on Amazon or anyone else in the domestic U.S. market. Most of its shares are in public hands, though Chinese firm Tencent, which runs the ubiquitous "WeChat" Chinese messaging platform, owns 20 percent, and Walmart owns 10 percent.

JD currently has U.S. locations in Los Angeles, New York, and Silicon Valley. The first two facilities support export business to China, while the Silicon Valley facility focuses on research and development activities. Later this year, it may expand its U.S. presence—probably in Los Angeles—to handle U.S. imports from the Middle Kingdom. It does operate a U.S. e-commerce site, but it is relatively primitive and would need to be exponentially upgraded should JD decide to build a major U.S. presence.

Like Amazon in the U.S., JD works with Chinese companies to market their products, manage their inventory, and arrange for deliveries. But that's where the similarities end. JD has 335 fulfillment centers across China, compared to Amazon's 121 or so in the U.S. JD makes at least 95 percent of its own deliveries across China, while Amazon controls about 5 to 7 percent of its deliveries in the U.S.; the vast majority of Amazon's deliveries are still made by third parties. JD has opened a completely automated fulfillment center in Shanghai (as in no human labor on the floor), something Amazon or any other company in the U.S. has yet to do.

While Amazon and others are experimenting with the use of commercial drones, JD has them in the air each day. (See photo above.) Smaller drones transport packages to remote, rural villages, where they are offloaded by village "co-ordinators," who make final deliveries by whatever means of transport available. However, the company is actively testing a fleet of much larger, heavier drones, with a capacity of up to 2,000 pounds, that will carry shipments between warehouses, or from farms to warehouses. Josh Gartner, a New York-based JD spokesman, said the company plans to make the larger drones a common sight over China's landscape.

JD has approximately 7,000 delivery stations across China. By comparison, UPS, the largest transport company in the U.S., has about 1,100. JD has 65,000 delivery drivers, slightly less than UPS' 70,000. About 92 percent of JD's deliveries are made within a 24-hour window, according to Satish Jindel, a transport consultant who spent 10 days last November in China observing the company's operations. Virtually all of JD's deliveries are free to the end customer, the exception being inexpensive transactions, where JD may tack on a delivery fee.

For a small number of deliveries—generally those going from manufacturer to customer, bypassing JD's fulfillment centers—JD will use parcel firm SF Express, considered a Chinese version of UPS or FedEx. SF Express and UPS inked a joint venture last May under which UPS picks up parcels in China on behalf of SF Express and ships them to the U.S. through the U.S. carrier's network. Over time, UPS plans to leverage SF Express' network to expand its own Chinese network, especially among small to mid-size businesses.

JD has 13,000 employees at its Beijing headquarters. Of those, 1,000 are data scientists and other advanced analysts helping JD better understand customers' spending habits and merchants' needs.

Through their ownership in JD, Tencent and Wal-Mart are collaborating with the company in a multi-year strategy to knock Alibaba off its perch as China's leading e-tailer. For its part, Alibaba, which today owns no inventory and does not manage fulfillment, is taking a serious look at JD's model in an effort to extend its own capabilities into JD's niches, Jindel said.

Though JD does not now pose a direct threat to Amazon on U.S. shores, its influence on the Seattle-based goliath is still felt. According to Jindel, in JD, Amazon sees the kind of company it eventually wants to be.

Innovation Stories from the Leading Edge

Webcasts
Distribution is transforming and writing the stories that will create a resilient, responsive, and regenerative supply chain. Many stories are to be told, including operating in a connected network, the cause of human flourishing, and creating space for financial and social wealth. In his second session at CSCMP...