We use cookies to provide you with a better experience. By continuing to browse the site you are agreeing to our use of cookies in accordance with our Cookie Policy.
Home » Dutch firm unveils world's first 3-D-printed propeller
Forward Thinking

Three-dimensional (3-D) printing technology has caught the logistics world's attention for its potential to save on warehouse and shipping costs by producing items on demand at any location. In the past two years, for example, UPS Inc. announced plans to partner with software developer SAP SE to build a nationwide network of 3-D printers for use by its customers, and General Electric Co. spent nearly $600 million to buy a three-quarters stake in the German 3-D printing firm Concept Laser GmbH. 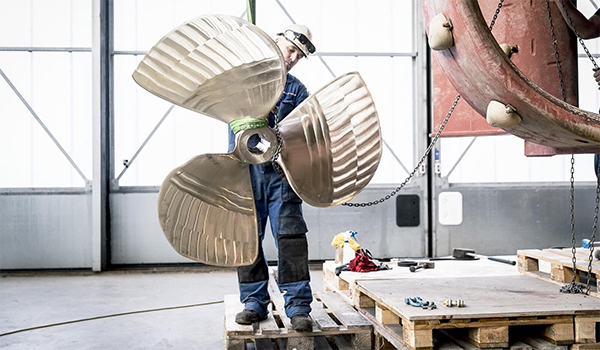 Recently, transportation companies have begun turning to the same technology for another application, creating the actual hardware used in vehicles that move the freight. For instance, in late 2016, global aircraft maker Airbus S.A.S. contracted with manufacturing firm Arconic Inc. to supply 3-D printed metal parts for its commercial aircraft.

Now comes word that a Dutch consortium has brought 3-D printing to the maritime—or at least, the shipbuilding—world. Late last year, the Dutch firm Damen Shipyards Group unveiled what it called the world's first class-approved 3-D-printed ship's propeller. Known as the WAAMpeller, the triple-blade prop was fabricated using the wire arc additive manufacturing (WAAM) technique, which deposited 298 layers of nickel aluminum bronze alloy to create the item. Damen then installed the 4.5-foot diameter, 880-pound WAAMpeller on one of its "Stan Tug 1606" tug boats, where it passed tough tests such as speed trials, a bollard pull, and a crash stop scenario, which stresses the propeller by going from full throttle ahead to full throttle reverse.

Viewer Contributed
Raymond offers end-to-endless intralogistics solutions. This is a unique mix of innovative products, best-in-class methodologies and software-based, data-powered solutions that work together to help you achieve your goals.