We use cookies to provide you with a better experience. By continuing to browse the site you are agreeing to our use of cookies in accordance with our Cookie Policy.
Home » The power of saying "yes"
Dialogue: A conversation with an industry leader

The power of saying "yes" 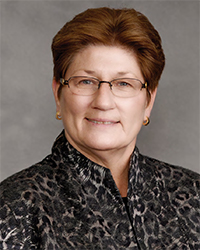 Think of your career path as a series of forks in a road. At frequent junctures, you must decide which path to follow. Often, it's a choice between remaining on the familiar track, confident that you know where you're going and that you've mastered your responsibilities, or forging ahead in a new direction, even though it will lead you into unfamiliar territory. When presented with those opportunities, Dr. Nancy Nix always chose the latter path because, she says, there is always something new to be learned—and what you learn will open doors for you in the future.

That willingness to explore new opportunities, and to use her experience to help others who are traveling their own career paths, were among the reasons Nix received the Council of Supply Chain Management Professionals (CSCMP) 2017 Distinguished Service Award. This prestigious honor is bestowed upon an individual for significant achievements in the logistics and supply chain management professions.

Following a lengthy career with E.I. du Pont de Nemours & Company and then with Reliance Industries Ltd., in Mumbai, India—and at a point in life when most people would be thinking about starting to take it easy—Nix earned a doctorate in logistics from the University of Tennessee. She then headed off in a new direction, as professor of professional practice in supply chain management at Texas Christian University, founder of the university's Supply & Value Chain Center, and executive director of its Executive MBA program. In 2014, she became executive director of AWESOME (Achieving Women's Excellence in Supply Chain Operations, Management, and Education), a professional association for women supply chain executives. As executive director, she oversees all AWESOME initiatives, including the annual symposium, the AWESOME/Gartner Women in Supply Chain research, and the AWESOME Excellence in Education scholarship program. (Nix will be "semi-retiring" at the end of December but will continue to be involved.) She also served on CSCMP's Research Strategies Committee and its board of directors, including terms as chair for both groups, and on its Executive Committee.

Nix urges fellow supply chain professionals to always keep an open mind. "When people give career advice, they often tell you that you need to learn to say no," she said when she received the award at CSCMP's EDGE conference in September. "I am here to tell you about the power of saying yes."

Nix recently spoke with Supply Chain Quarterly Editor Toby Gooley about her experiences and the value of seizing interesting opportunities whenever they come along.

How did you originally get involved in the field of supply chain management? What attracted you to the profession?
Early on I worked for DuPont, starting in manufacturing. I met and married my husband, who was also in manufacturing there, but at a higher level than I was. There were challenges from being in the same part of the organization, so when the option presented itself to still be part of the organization but not in the same area as my husband, I moved to contracted distribution. From there I moved to related roles in contracted manufacturing, customer service, and procurement. These experiences gave me an integrated view of the supply chain before we even called it supply chain!

Thanks to those moves, I gained a better sense of the business than I did when I was just in manufacturing. I got to see the interconnected relationships across functions. Supply chain allows you to connect with customers and suppliers—to see outside the four walls of the business. The breadth of perspective you can gain in supply chain is huge compared to what you are exposed to in internally focused jobs.

In your acceptance speech for the Distinguished Service Award, you talked about saying "yes" to opportunities that may be unexpected or outside one's usual experience. Can you give a couple of examples from your own life, and the impact they had on you?
My first experience was when I was working for DuPont. I had the opportunity to transfer from a line management role to a different location in a planning role. At the time, I was a single mother with two boys, and it would mean moving 450 miles away to a place where I didn't know anyone and had no support system. Plus it was a job I had a limited background for. I made the move, and it wasn't easy but it was doable—and it opened up so many new horizons for me. That was the first time I realized that I was capable of more than I knew. I picked this example because so many young women are so much more capable than they know. If they will just get out there and take a chance on doing something different, they can learn and grow.

Another was when I moved to India. It was the adventure of a lifetime! My husband and I made the move together. I left a 15-year career with DuPont to live and work in a country I had never visited before. That was in the 1990s, before India became integrated into the world as it is now. It was a very different environment than I was used to, and a little scary. We went to work for an Indian company called Reliance Industries. I think we were the third and fourth expats at the company. ... One of the great parts of that experience was going from an old, established, well-known company to a family-owned, much smaller business. The family's leaders were so entrepreneurial, so innovative. They were really smart people with great vision, and it was a very exciting time to be part of that company, which is now a $50+ billion company involved in a number of different businesses. It was very educational, and the opportunity to live and work in a different country and culture was invaluable.

I didn't necessarily think these moves were all that risky. I was a little concerned about how I would manage in new roles and locations, but the upside potential was so great that I thought, how could I say no? I tell my sons, don't say no to something. Keep your options open and prepare yourself for new opportunities. If it doesn't work out, the worst that could happen is that you'll have to go back to what you were doing before.

Are there experiences or aspects of your jobs that you found especially rewarding?
I really love to be a "builder"; I am not the person you want if you want a "maintainer." I enjoy being able to build something new and move it forward in a significant way that will make a difference. When you're building something new you have to be working from a "big picture" perspective. That's another reason supply chain has been such a good fit for me: you have to look broadly at multiple areas.

But I think it's also about people and building a team. Anyone who knows me will tell you that I believe in having fun! Yes, you should roll up your sleeves, work hard, and be committed to getting the job done and done well, but let's have fun while we're doing it!

What experiences prepared you to become part of the leadership team of an organization for women executives?
At Texas Christian University I taught, of course, and also conducted research. But I also built an academic center that had to engage people in industry and get their support. That included developing an advisory board and establishing an annual symposium for the business community that supported us, finding ways to bring businesses together with our students. Although it might not seem like it at first, there were a lot of commonalities with leading a professional organization. I would say that everything I did in academia prepared me to do what I'm doing at AWESOME. And working with our students gave me great experience that prepared me to offer insights to young women in supply chain to help them develop and advance their careers.

What advice would you give a supply chain professional who is considering making a major career or life change?
Have confidence in yourself! I believe in hard work, but that's just the baseline. You're capable of more than you realize. Don't say no because you don't think you're 100 percent ready. And don't be afraid to ask for help. Be an active learner and do what's required to grow into a new role. Remember that there is something to be learned from everyone. Don't go into a new position thinking you won't learn anything from someone who reports to you because you're above them. If you think that way you won't ever get where you want to go.

Moving into a new team, though, is very difficult. Be authentic, and focus on making a difference and getting results. Show up and do the hard work, give credit where it's due, and earn others' trust. So many people think they have to demonstrate what they know instead of showing that they are learning what they need to know.

Any thoughts to share as you prepare to step down from your position as AWESOME's executive director?
What I would say is it is a wonderful time to be a woman in supply chain. So many companies are recognizing the importance of diversity at all levels of leadership and are stepping up to the changes required to make it happen. I encourage young women in our field to recognize the significant contributions they can bring to their organizations. Have confidence in your capabilities, and be the architect of your own career by identifying areas in which you need to develop and asking for the opportunities that will give you experience you need.

Being a part of the AWESOME team over the past few years has been extremely rewarding. We have enabled senior women in our field to connect with, learn from, and inspire each other, and we've increased the recognition and visibility of so many talented and successful women who are wonderful role models for the next generation of leaders. It's been a real pleasure to see the energy and excitement of these very accomplished women who are giving back and making a difference for the next generation of women leaders in supply chain.

Strategy
Contributing Editor Toby Gooley is a freelance writer and editor specializing in supply chain, logistics, material handling, and international trade. She previously was Editor at CSCMP's Supply Chain Quarterly. and Senior Editor of SCQ's sister publication, DC VELOCITY. Prior to joining AGiLE Business Media in 2007, she spent 20 years at Logistics Management magazine as Managing Editor and Senior Editor covering international trade and transportation. Prior to that she was an export traffic manager for 10 years. She holds a B.A. in Asian Studies from Cornell University.