The 28th annual "State of Logistics Report," produced by the Council of Supply Chain Management Professionals (CSCMP) and presented by Penske Logistics, paints a somber picture of logistics activity during 2016. The report, which provides an overview of key industry trends and the total U.S. logistics costs for the previous year, shows expenditures declining for the first time since 2009 and logistics spending as a percentage of U.S. gross domestic product (GDP) dropping to its lowest level since the depths of the Great Recession.

Written by the global management consulting firm A.T. Kearney, the report includes an extensive review of macroeconomic trends affecting logistics costs and offers a wealth of historical and forecast data. This year the research indicates that profound changes, which once seemed far in the future, have already become part of logistics managers' daily reality. The report cites shifting demand patterns, technological advances that are altering industry economics, and new competitors that are challenging old business models. While these changes will lead to a "fully digital, connected, and flexible supply chain," the report says, they will also create new winners and losers. That includes employees whose jobs will be permanently altered—and in many cases eliminated—by automation, artificial intelligence, and other technologies. Small wonder, then, that the title of this year's report is "Accelerating into Uncertainty." 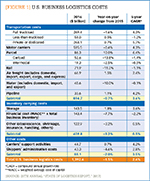 The report found that spending last year was constrained by uneven economic growth, overcapacity across virtually all modes, and corresponding rate weakness. As shown in Figure 1, total logistics expenditures—framed in the report as "costs"—fell 1.5 percent year-over-year, to $1.39 trillion. (All figures are in U.S. dollars.) The decline contrasts with a 4.6-percent increase in logistics spending, compounded annually, from 2010 to 2015, as the U.S. economy and the logistics businesses supporting it emerged from their worst downturn in more than 70 years.

Logistics costs as a percentage of GDP, traditionally viewed as the report's headline number, came in at 7.5 percent in 2016, the lowest point since 2009, when the ratio stood at 7.37 percent. The report's authors cited a "sharper improvement" in logistics efficiency last year as the principal reason for the decline. The ratio moved in a very tight range between 2011 and 2015, and ended 2015 at 7.84 percent. (See Figure 2.)

In addition to transportation costs (all modes plus parcel and pipeline), total U.S. business logistics costs include: inventory carrying costs, comprising financial, storage, business inventory, and "other" (obsolescence, shrinkage, handling, and insurance); "carriers' support activities," which covers a broad range of services, including forwarding, contract logistics, packing, and support services for transportation; and "shippers' administrative costs," which reflect wages and benefits for logistics-related occupations as well as the cost of logistics-related information technology.

Transportation: Some up, some down
Truckload expenditures, the largest line item among the cost categories, fell 1.6 percent year-over-year to $269.4 billion. That may not be the case by the time next year's report comes out. It is "not sustainable" for so many carriers to accept noncompensatory margins; shippers should therefore expect to see higher trucking prices in the fourth quarter of 2017 and first quarter of 2018, said Marc Althen, president of Penske Logistics, at a June 20 press conference in Washington, D.C., where the report was released. Rail carload expenditures—buffeted by continued weakness in coal volumes and declines in spending on energy exploration and development caused by lower oil prices—fell by 13.8 percent, according to the report. Intermodal spending declined 2.5 percent. Rail demand was "anomalously low" last year, and volumes and associated spending should rise this year, said Beth Whited, executive vice president and chief marketing officer for the U.S. railroad Union Pacific Corp., at the press conference.

Whited said she expects single-digit volume increases in 2017, with coal and grain exports leading the way, and "a significant jump" in 2018 as new chemical production facilities begin to pump out product.

Spending on water transportation, which covers both U.S. domestic and import and export traffic, dropped 10 percent, reflecting persistent liner overcapacity and rate pressures on international trade lanes, according to the report. Airfreight spending, which includes U.S. domestic and export and import cargo as well as air express, rose 1.5 percent.

Not surprisingly, parcel spending, supported by increases in demand for e-commerce fulfillment and delivery, jumped 10 percent, the report said. For the first time in the report's history, parcel moved ahead of rail in terms of modal spending, taking second place behind motor carriers.

Total spending on "carriers' support activities" was up. However, both freight forwarding and third-party logistics companies are struggling to adapt to global economic trends, new competitors, and technological advancements that are undermining their traditional business models, the report said. Among the growing trends is customer demand for "one-stop" integrated services, a major factor in the recent wave of consolidation in this segment. Meanwhile, "shippers' administrative costs" declined by 4.6 percent in 2016.

The report identified several reasons for that apparent disconnect. Perhaps the biggest influence was a sizable decline in the weighted average cost of capital, which drove down the financial costs of carrying inventory by 7.7 percent. Another factor: The nation's inventory-to-sales ratio, which in the retail trade measures the value of on-hand inventories relative to final sales, steadily declined after peaking in the second quarter of 2016. Additionally, the category of inventory carrying costs that includes obsolescence, shrinkage, insurance, and handling fell 3.2 percent.

Also significant was the fact that although available warehouse space fell to what the report called a "historic low" of 8.2 percent by the fourth quarter of 2016 (later eclipsed in early 2017 by a new low of 8 percent), spending on warehouse services in 2016 rose just 1.8 percent over 2015 levels, about half the pace of its five-year compounded annual growth rate.

These muted spending levels may not last for much longer, however. Decisions by 21 states to raise their minimum wage and the growing need for e-commerce warehouse operators to invest in expensive automated material handling systems will have "a significant effect" on warehouse costs, Sean Monahan, an A.T. Kearney partner and the report's lead author, said at the press conference.

Different directions
The decline in transportation spending came amid a rise in energy prices off of multiyear lows. This marks the second consecutive year that the two trends moved in opposite directions, reinforcing the notion that energy is no longer the primary factor driving logistics spending. Rather, consumers have become the main influence, the report said.

Yet the inherent uncertainty has not slowed the pace of change as newcomers challenge established players for market share and incumbents refresh their business models, the report said. In one of their most provocative forecasts, the authors said they expect more large shippers to follow the lead of Amazon.com Inc. and either establish new or expand existing in-house logistics operations. Seattle, Washington-based Amazon, the nation's largest online retailer, has added aircraft and truck trailers. It is also constructing an air cargo hub in Cincinnati, Ohio, to support its two-day delivery service, Amazon Prime.

For now, caution rules the day, reflected in declines in the closely watched inventory-to-sales ratio, the report said. The authors acknowledged that the declines could be attributed to more accurate forecasting tools that minimize the risk of over-ordering. However, they added, a more plausible case can be made that companies unsure about future demand are holding inventory levels closer to actual retail sales figures instead of stocking up in anticipation of future growth.

About the "State of Logistics Report"

For 28 years, the annual "State of Logistics Report" has quantified the impact of logistics on the U.S. economy. The late logistics consultant Robert V. Delaney began the study in 1989 as a way to measure logistics efficiency following the deregulation of transportation in the United States. Later, transportation consultant Rosalyn Wilson wrote the report under the auspices of the Council of Supply Chain Management Professionals (CSCMP). The report is now written for CSCMP by the consulting firm A.T. Kearney, with input from economists, analysts, and other industry experts. As in past years, Penske Logistics was the report's principal supporter.

CSCMP members can download a copy of the 43-page report at no charge from CSCMP's website. Nonmembers can purchase it by going to CSCMP's website, clicking on the "Develop" tab, and then selecting "State of Logistics Report."

Editor's note: Videos of the June 20, 2017, "State of Logistics Report" presentation, an interview with lead author Sean Monahan, and the panel discussion that followed the report's release at the National Press Club in Washington, D.C., can be found on Penske Logistics' YouTube channel.

State of Logistics Report
Contributing Editor Toby Gooley is a freelance writer and editor specializing in supply chain, logistics, material handling, and international trade. She previously was Editor at CSCMP's Supply Chain Quarterly. and Senior Editor of SCQ's sister publication, DC VELOCITY. Prior to joining AGiLE Business Media in 2007, she spent 20 years at Logistics Management magazine as Managing Editor and Senior Editor covering international trade and transportation. Prior to that she was an export traffic manager for 10 years. She holds a B.A. in Asian Studies from Cornell University.
Mark Solomon is executive editor—news at DC Velocity, a sister publication of CSCMP's Supply Chain Quarterly.