We use cookies to provide you with a better experience. By continuing to browse the site you are agreeing to our use of cookies in accordance with our Cookie Policy.
Home » An AWESOME choice: CSCMP names Nancy Nix as 2017 Distinguished Service Award recipient
CSCMP Notebook 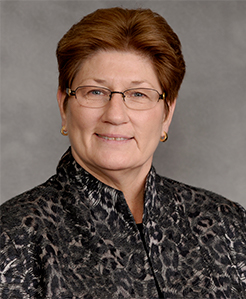 Nancy Nix, executive director of the industry association Achieving Women's Excellence in Supply Chain Operations, Management, and Education (AWESOME), will receive the Council of Supply Chain Management Professionals' (CSCMP) 2017 Distinguished Service Award (DSA). She will be presented with the award during the opening general session at the CSCMP EDGE Supply Chain Conference in Atlanta, Georgia, USA on September 25, 2017.

CSCMP's Distinguished Service Award is bestowed upon an individual who has made significant contributions to the logistics and supply chain management professions. Presented annually, the award was instituted in 1965 as a tribute to logistics pioneer John Drury Sheahan.

"Dr. Nix has an extraordinary record of service to the supply chain community, with demonstrated successes as a practitioner, educator, and industry leader," said Rick Blasgen, president and CEO of CSCMP, in a statement.

Nix is formerly executive director of the Executive MBA Program and professor of professional practice in supply chain management at the Neely School of Business at Texas Christian University. She received her doctorate in logistics from the University of Tennessee and her MBA from Temple University. She has extensive management experience with the DuPont Company and Reliance Industries Limited in Mumbai, India.

Nix was nominated by Ann Drake, chairman and chief executive officer of DSC Logistics, who founded AWESOME in 2013. Drake was herself a recipient of the DSA in 2012.

"Dr. Nix's unique background and involvement in so many aspects of the profession give her an almost unparalleled record of contribution to the discipline in terms of increasing supply chain understanding, sharing knowledge, building networks, developing innovative curriculum and programs, fostering professional growth, expanding the talent pipeline, and encouraging diversity," said Drake. "Her long-term impact not only on the lives of thousands of supply chain professionals, but on the industry as a whole, is significant, remarkable, and distinguished."

Nix was actually at a planning meeting for AWESOME with Drake when she heard the news about the award.

"I must say I was quite speechless," said Nix. "Ann and I were both so excited and a bit emotional. I am very honored personally to receive this award, especially when I look at so many icons who have been recognized in the past. But also I am so excited to be able to follow Ann as the second woman to receive the award."

Nix's receiving the award also fits in with the mission of AWESOME itself. Among her many achievements, Nix has developed "powered by AWESOME" programs that promote leading female supply chain professionals as speakers and panelists for supply chain events, raising the profiles of women as experts and leaders in the profession.

"One of our goals in AWESOME is to increase the recognition and visibility of the very accomplished, successful women in our discipline through awards like the DSA award and the AWESOME Legendary Leadership (ALL) award, as well as through speaking roles at major industry conferences and other outlets," said Nix. "In the future, I am hopeful we will see more recognition of the many women leaders who have had significant impact in our industry."