We use cookies to provide you with a better experience. By continuing to browse the site you are agreeing to our use of cookies in accordance with our Cookie Policy.
Home » Mexico's NAFTA advocate
Forward Thinking 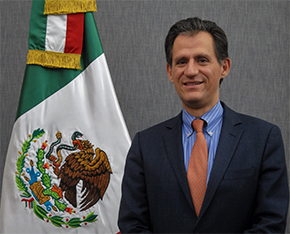 Kenneth Smith Ramos, head of Mexico's Trade and NAFTA office, has his work cut out for him in light of U.S. plans to renegotiate the treaty.

Twenty-three years after the North American Free Trade Agreement (NAFTA) went into effect, the treaty has become a hot topic again as U.S. President Donald J. Trump issues a steady stream of pronouncements about his desire to renegotiate—and possibly even withdraw—from the trilateral agreement among Canada, the United States, and Mexico. That means Kenneth Smith Ramos has his work cut out for him. As head of the Trade and NAFTA Office of Mexico's Ministry of Economy in Washington, D.C., Smith is in charge of promoting the trade relationship between Mexico and the United States and for ensuring proper implementation of NAFTA.

The bilingual Smith comes to the job with strong credentials. He holds a bachelor's degree in international affairs from Georgetown University and a master's degree in international economics from Johns Hopkins University. He's put that educational background to the test in his previous posts, including coordinator general for international affairs at Mexico's Ministry of Agriculture, Livestock, Rural Development, Fisheries, and Food (known by its Spanish acronym, SAGARPA). Prior to that assignment, he was director general of international affairs at the Federal Competition Commission, and director general for assessment and monitoring of negotiations at the Ministry of Economy. Smith has now come full circle: He began his government career working for Mexico's original NAFTA negotiation team.

We spoke with Smith in April about how Mexico views its role in the global supply chain and the country's hopes for the future of NAFTA.

There is a lot of talk about manufacturing returning from Asia to North America. Are you seeing evidence of that in Mexico?

Yes, we are. Since China entered the World Trade Organization [in 2001] China has been strongly competing with Mexico for U.S. business and also for business within Mexico. In fact, some Mexican manufacturing moved to Asia. So we tried to incentivize advanced, higher value-added manufacturing to locate in Mexico through a network of free trade agreements and, for the domestic sector, a program of duty-free inputs for industries such as electronics, steel, and automotive.

This was quite successful. Let's take the example of televisions. We made modifications to the NAFTA rules of origin to allow certain components from abroad to be included, and the finished product could still qualify as a NAFTA product. This created an incentive for new-generation TVs to be made in Mexico for U.S. consumption.

Mexico receives more than US $30 billion of foreign direct investment annually. In the last few years, less than half of it has come from the U.S. The number one sector for foreign direct investment is the automotive industry—and not just from the big U.S. automakers. Companies like BMW, Hyundai, Audi, and Volkswagen are expanding manufacturing and assembly capacity in Mexico.

Manufacturing is becoming highly automated. Is Mexico prepared for this change?

As I mentioned, we are promoting Mexico as a location for advanced, higher value-added manufacturing. That means our workforce needs more technical skills. For that reason, the Ministry of Economy and state governments are working with the private sector and foreign investors to provide more technical training and education. A good example is the aerospace industry, which has a strong presence in Mexico. In QuerÃ©taro we established an "aeronautics university," a special graduate school for engineers who want to work in that sector. The university works with the private sector to identify the engineering skills they will need for the future. We have something similar for the medical equipment industry in Chihuahua, and we hope to replicate it in other industrial segments.

Our workforce is a key "selling point" for bringing more manufacturing back to North America. Mexico has the right demographics—our average age is 26—and we already have a very robust base of skilled labor increasingly shifting from traditional maquiladora assembly plants to more technologically advanced industries.

What industries does Mexico excel in, and where will its future strengths lie?

In addition to agriculture, our current strengths are in aerospace, medical equipment, biotech and health sciences, electronics, and automotive. In addition to manufacturing plants, we're seeing more companies investing in product-design centers in Mexico, including companies like Intel and Honeywell.

I think those industries will continue to be successful and grow. Mexico is also pushing forward with structural, constitutional reforms that have opened the way for private investment in oil, gas, electric power generation, and renewable energy. The energy potential in North America is huge, and it could greatly boost the NAFTA region's competitiveness.

How does Mexico see its position within the global supply chain?

I think that through NAFTA, Mexico has demonstrated that we can be a hub for production and a platform for cross-border supply chain integration. So we have great potential to expand that capability and to be a key player in global supply chains. In addition, Mexico is the world's 15th largest economy, the 10th largest exporter, and the 9th largest importer, and we have free trade agreements with 46 nations. These agreements make Mexico an attractive center for investment and production for the rest of the world.

What is the Mexican government's position on NAFTA modernization and renegotiation?

The Mexican government's position is that NAFTA would benefit from modernization that is based on a fact-based assessment that reflects reality and avoids political rhetoric. The outcome of any renegotiation must be a win for all three countries involved, and it must maintain the integrity of the integrated supply chains that NAFTA created.

We are at a very important crossroads in regard to NAFTA. We can go down the road of building on what we've achieved in the past 23 years and strengthen our cooperation on regulations and infrastructure. Or we can fall prey to the pressures of protectionism, which would raise the cost of doing business within our region and severely hamper our economic growth.

Work has begun on developing a North American version of the "Single Window," where shipment data would be shared by the three NAFTA governments' relevant agencies. Are cooperative initiatives like this at risk if the treaty is renegotiated?

Mexico is very committed to a "21st century border" and to partnerships that support prosperity for all three NAFTA countries. Mexican Customs has a very strong partnership with its U.S. and Canadian counterparts. For example, Mexico changed its laws to allow U.S. Customs and Border Protection (CBP) officers to conduct cargo pre-inspections in Mexican territory. We want these types of pilot programs to become permanent and expand beyond the border.

So far [customs cooperation] has not been brought up directly in conversations about NAFTA modernization. I think the three countries should work to ensure that trade enforcement and facilitation are strengthened. Cooperation among the customs agencies will be essential as we go forward with NAFTA modernization.