We use cookies to provide you with a better experience. By continuing to browse the site you are agreeing to our use of cookies in accordance with our Cookie Policy.
Home » Which country has the most resilient supply chain of them all?
Forward Thinking

Which country has the most resilient supply chain of them all? 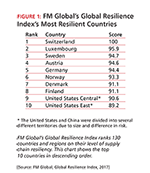 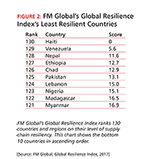 FM Global designed the index as a strategic tool to help business executives gain a better, macro sense of the resiliency of their global supply chains, said Brion Callori, senior vice president of engineering and research for FM Global, in an interview. The information in the index can help companies decide where to locate new facilities and assess the risk level of suppliers and customers based on where they are located, according to Callori. It can also indicate where a company with locations in riskier regions of the world may need to invest in redundancies or better continuity plans, he said.

The Index is calculated based on 12 key drivers of supply chain resilience, which are grouped into three categories: economic, risk, and supply chain factors. These factors are combined to form the composite index score. Scores are assessed on a scale of 0 to 100, with 0 representing the lowest resilience and 100 being the highest resilience.

Switzerland's placement at the top of the list is a testament to the fact that the country has consistently high ratings on all of the 12 risk drivers, Callori said. Most other countries have at least one area where they have a low score, which drags their overall ranking down, he said. For example, their potential for damage from earthquakes or high winds gives the western and eastern regions of the United States lower "exposure to natural hazards" scores than other countries with similar overall Index scores. (Because of their size and importance in the global economy, FM Global divided both the United States and China into three separate zones each.)

In addition to providing the rankings and scores, the interactive online tool, for the first time this year, also depicts how the scores cluster together. For example, the tool shows that while there is a notable gap between Switzerland's scores and resiliency level and those for second-place Luxembourg, there is little difference between Luxembourg's resiliency levels and those for the next four countries on the list (Sweden, Austria, Germany, and Norway). The Index also shows a tremendous gap between the countries that scored the lowest—Haiti and Venezuela—and the rest of the countries on the bottom of list, indicating the extreme amount of stress these two countries are under.

"Inherent cyber risk" reflects a country's vulnerability to a cyber attack and its ability to recover. "Urbanization rate" indicates how fast a country's cities are growing. According to Callori, this factor serves as a proxy for stress (on water supplies, power grids, and other infrastructure) that would be exacerbated by natural disasters such as windstorms, floods, and earthquakes. Finally, "supply chain visibility" is related to the ability to track and trace consignments across a country's supply chain.

"Things change, and we wanted the Index to be able to reflect that," explained Callori. "Five years ago, for example, cyber risks were not as top of mind as they are today. We wanted the index to be flexible and show what was really driving risk exposures."

To ensure consistency, FM Global gathered data for the three new factors going back five years, which allowed the insurer to revise the rankings from all of the previous years to include those factors.