We use cookies to provide you with a better experience. By continuing to browse the site you are agreeing to our use of cookies in accordance with our Cookie Policy.
Home » Mobile robot tracks inventory on store shelves
Forward Thinking

A new inventory-tracking robot called Tally could improve supply chain visibility by providing an inexpensive way to track goods after they leave the warehouse, according to industry professionals at the National Retail Federation (NRF) convention in New York this week. 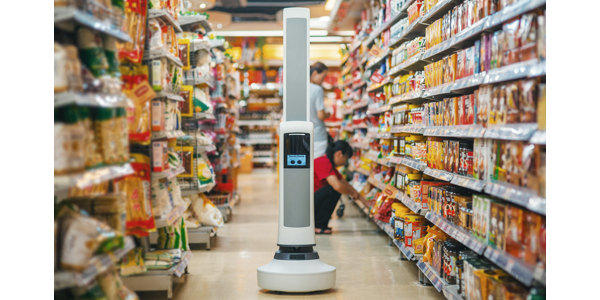 The Tally robot snaps high-resolution pictures of store shelves and automatically identifies and counts the items.

San Francisco-based Simbe Robotics Inc. makes the mobile robot, which maneuvers around crowded retail floors taking high-resolution imagery of store shelves and automatically identifying and counting the items it sees. The Tally platform uses image-recognition technology to do the work at a lower cost than traditional methods such as radio-frequency identification (RFID) tags, its maker says.

The Tally platform is currently pitched for retail environments, not warehouse facilities, but the greatest potential value of this approach is in sharing the precise inventory data with partners throughout the supply chain, Brad Bogolea, Simbe co-founder and CEO, said in an interview. "Retailers are rarely able to do item-level counting; the only time inventory is checked at that level is when it passes through a checkout counter, or a manager tasks an employee with walking around with a [radio-frequency] gun," Bogolea said.

Many stores find it too expensive and time-consuming to track levels of low-value inventory through traditional methods, such as deploying labor to scan barcodes or RFID tags, according to Bogolea. Consequently, most retailers get by with estimated inventory counts known by the nickname "nones, ones, or tons," in which employees simply note whether a shelf is empty (none), has low inventory (ones), or is fully stocked (tons), he said.

By capturing precise data on the velocity at which products leave the shelves, retailers and their logistics partners could avoid problems like out-of-stock items and lost, damaged, or stolen inventory, he said.

"Our mission is to close the data gap between supply chain and point-of-sale (POS) intelligence," Bogolea said. "Brick-and-mortar retailers have a pretty good sense of what products leave the DC, but then that drops off until the product passes the [point-of-sale terminal] in a customer's basket."

A Tally robot could be seen wandering among exhibitors' booths at the crowded NRF show, rolling on a wheeled base and navigating with an array of sensors such as lidar, wheel odometry, inertial measurement units (IMUs), and three-dimensional cameras. Each robot includes a round base about 36 inches high and bears a 60-inch mast above it, enabling the unit to extend its camera to a height of 96 inches, or eight feet.

Separately, NRF's non-profit arm, the NRF Foundation, named Bogolea as one of five top "disrupters" in the field over the past year.

See Tally in action below.

Kuehne+Nagel will operate final 747 jet to be built