We use cookies to provide you with a better experience. By continuing to browse the site you are agreeing to our use of cookies in accordance with our Cookie Policy.
Home » Globalization at a crossroad?
Monetary Matters

Globalization at a crossroad?

In countries that are recovering only sluggishly from the Great Recession, many of society's major challenges have been blamed on globalization. According to a popular view, the lowering of trade barriers in global markets and the increased flow of goods and labor across national borders have caused wage stagnation, fewer job opportunities, and widening income inequality, among other problems. Resistance to globalization has spawned a backlash in developed economies, with the United Kingdom's "Brexit" vote to leave the European Union and the outcome of the U.S. presidential election being two major recent examples. This is not a new phenomenon, however, and one does not have to look far to find other examples. The North American Free Trade Agreement (NAFTA) of the 1990s faced fierce opposition, epitomized by the presidential candidate Ross Perot's 1992 declaration that if it were enacted "there will be a giant sucking sound going south." Meetings of the World Bank, World Trade Organization, and International Monetary Fund were all marked by fierce anti-globalization protests throughout the 1990s and early 2000s.

Historically, a country's popular sentiment around globalization has varied in proportion to the health of its economy. The Great Depression of 1929-1939 presents a clear example; as the U.S. economy's performance worsened, legislators embarked on a program of increased protectionism that included the Smoot-Hawley tariffs, which were countered by tariffs raised by other countries. This type of trade war is widely regarded as having exacerbated the Depression. 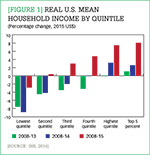 Support for globalization is currently at another low point. In the United States, presidential candidates of both major parties were opposed to the Trans-Pacific Partnership (TPP), while one went further, labeling NAFTA the "worst trade deal in history" and making reducing immigration a major campaign plank. The unsatisfying pace of the economic recovery since the Great Recession, which ended in June 2009, and the displacement of workers due to the development of new technologies have caused stewing economic anxieties for many in the country, amplifying anti-globalist attitudes. The Great Recession was brutal for many middle- and lower-income households, and many middle-class families were forced into a lower standard of living during the recession and the subsequent anemic recovery. (See Figure 1.)

Things are finally starting to improve for many American households. In 2015 household income made a comeback, gaining 5.2 percent—the largest one-year increase on record, and the first statistically significant increase since 2007 (standing only 1.6 percent below its 2007 level). Real median household income has not yet regained its pre-recession peak, but we expect it to surpass its 2007 level next year. (See Figure 2.)

Americans have not been alone in their angst. Many in the U.K.'s middle class, especially in rural areas, saw their standard of living slip as well. The resulting backlash in that country has occurred alongside a corresponding increase in anti-immigrant sentiment. Indeed, resentment over high rates of immigration was a major factor in the outcome of the vote to separate from the European Union.

Brexit and political uncertainty in Europe have clouded Europe's economic outlook. There are elections scheduled for 2017 in the Netherlands (March), France (April/May), and Germany (around September). Moreover, Italy's prime minister resigned in early December, and new elections potentially could be called next year. Now the recent U.S. election has added to those risks. The outcome of the U.S. election could not only embolden right-wing populist parties in Europe, but it could also make the Brexit negotiations more complicated.

The perils of protectionism
Resistance to globalization is spreading and gaining attention, but it is highly misguided. Although freer trade and immigration do produce "winners" and "losers," their net effects have been unambiguously positive for developed economies. Six years after NAFTA's signing in 1994, the U.S. economy was booming, and the unemployment rate reached 3.8 percent—its lowest point in 30 years. NAFTA probably helped, and it certainly didn't hurt. Similarly, immigrants almost always provide a net benefit to a host economy. Although this is particularly true of high-skilled immigrants—a group that disproportionately creates businesses, earns doctorates in science and engineering, files patents, and wins Nobel Prizes—it is also true of low-skilled immigrants. These workers typically do not cause lower wages or outcompete the native-born for jobs. Instead, they take jobs native workers do not want, such as those in the agricultural and cleaning industries.

The effects of technological growth on a developed economy are virtually identical to those of globalization—but they occur on a much larger scale. On balance, both forces destroy jobs but create more than they eliminate. The effect is asymmetrical, however. Workers with lower levels of skills, education, and mobility tend to lose out, while higher-skilled workers generally benefit. However, all consumers, especially the poor, benefit from the better product quality and lower prices that result.

Because the costs of these effects in the form of lost jobs are easier to spot than diffuse increases in purchasing power and economic performance, it can be politically convenient to oppose free trade and immigration. But efforts to limit globalization—through such means as protectionist tariffs—both raise prices and damage the competitiveness of domestic industries that import raw materials. Instead of focusing on globalization itself, attention would be better spent on helping those hurt by globalization and technological advancement. There are plenty of ways to do it: increasing access to higher education and job training, growing wage insurance programs, and expanding negative income taxes (such as the U.S. earned-income tax credit), to name just a few. These types of policies produce much more socially beneficial results than attempting to halt globalization or technological growth.

The election of Donald Trump as the next president of the United States has the potential to upend the global status quo and to alter the economic outlook. In part, the degree of disruption will depend on the extent to which his protectionist talk carries through to his policies. If the Trump administration's actions mirror some of its more extreme campaign rhetoric—if it places significant barriers on trade or carries out mass deportations—then gross domestic product (GDP) growth and growth in trade will likely both diminish even as inflation increases, a condition known as "stagflation." On the other hand, if he pursues more pragmatic, "pro-growth" policies, then economic growth, interest rates, and inflation will all be higher. This latter outcome would benefit most, but not all, of the countries around the world.

Chris G. Christopher, Jr., is executive director of the U.S. Macro and Global Economics practice at the research and analysis firm IHS Markit.

E-commerce in a connected world