We use cookies to provide you with a better experience. By continuing to browse the site you are agreeing to our use of cookies in accordance with our Cookie Policy.
Home » Food from CSCMP Stop Hunger Now event being used to support relief efforts in Haiti
CSCMP Notebook

When 250 supply chain managers gathered at a volunteer event the Sunday before the Council of Supply Chain Management Professionals (CSCMP) Annual Conference in Orlando, Fla., to assemble more than 45,000 food packages for the international hunger-relief nonprofit Stop Hunger Now, no one knew where or when that food would be needed. This past Tuesday, the final destination became clearer when the food packages arrived in Haiti as part of a 175,000-pound shipment of food and medicine to support ongoing relief efforts for Hurricane Matthew, according to Kathy Fulton, executive director of the American Logistics Aid Network (ALAN). 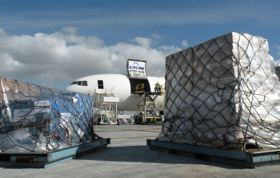 Enlarge
A shipment of food and medicine for Hurricane Matthew relief efforts waits to be loaded on a plane bound for Haiti. This shipment includes meal kits that were packed during the Stop Hunger Now volunteer event at CSCMP's Annual Conference.

The air shipment, which left from Miami International Airport, involved seven nonprofit organizations and was coordinated by Airlink Inc., which connects airlines with prequalified nonprofits that need airfreight services, on behalf of the nonprofit relief organization Adventist Development and Relief Agency.

Airlink contacted Fulton's organization, ALAN, to help arrange the ground transportation efforts inside the U.S. to get the shipment to the airport. While arranging those services, Fulton discovered that part of the shipment was coming from Stop Hunger Now's warehouse in Orlando, Fla. An active CSCMP member, Fulton remembered the pre-conference volunteer event and had a feeling that some of the food packed during it might be in the shipment.

"I walked onto airfield [Tuesday], and I saw the tag on the pallet that said, '9/25, CSCMP'," said Fulton during a phone interview. "I got chills."

The path that the food packages followed to Haiti demonstrates the complexity of the humanitarian supply chain and the number of actors involved. First the packages were assembled by volunteers in a conference hall at the Gaylord Palms Resort and Convention Center in Kissimmee, Fla. Many of those volunteers were from logistics service provider C.H. Robinson Worldwide Inc. and chemical and agricultural giant Monsanto Co., which both sponsored the event. The packages were then taken from the conference center to Stop Hunger Now's warehouse in Orlando, Fla. There they were stored for about a month before ALAN arranged for them to be trucked to a warehouse owned by Performance Team.

In spite of this being Performance Team's busiest time of year, Fulton said that the logistics and distribution company has been "ridiculously supportive" in volunteering their services for relief efforts. The Performance Team consolidated the shipment from Stop Hunger Now with others—including a bulk shipment of 50-pound bags of rice that was transported by UPS from Texas. The company also provided value-added services such as labeling; checked the air bills for accuracy; and then trucked the shipment to the airport on Monday.

The next day, the shipment was flown from Miami via a Western Global Airlines plane to Port-au-Prince. Currently the food and medicine are being distributed to nonprofit organizations throughout Haiti. Some of that cargo will even be delivered by two Bell helicopters that Airlink has in the country. "The roads are so bad that they're doing air lifts using helicopters to go to some outlying areas," explained Fulton.

Companies that are interested in providing logistics services and products to help with ongoing Hurricane Matthew and other relief efforts are encouraged to visit ALAN's website.

Fred Smith is not worried about Amazon