There is a complex web of factors that influence where a company chooses to locate a warehouse or distribution center (DC) and how it chooses to operate it. These factors can vary depending not only on the company's own individual business needs but also on economic conditions and trends in the marketplace. The following are four significant trends that our clients say are affecting how they look at their distribution site selection and operations.

1. Focus on costs
Costs have always played a large role in deciding where to locate a distribution facility. But in the face of uneven growth and economic uncertainty on both the global and domestic fronts, many cautious companies are keeping an even closer eye on costs. Hot-button areas include the rise of temporary labor staffing, expected to increase at a strong 3.5 percent pace this year, and industrial rents for warehousing space, up 8.6 percent nationally and well over 10 percent in markets like New Jersey, South Florida, and the Bay Area of California. 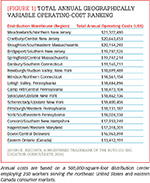 The comparative cost of doing business in terms of labor, land, DC construction, power, and taxes can vary dramatically, even within the same geographic region of the country. For example, Figure 1 compares the cost of operating a representative distribution warehouse in various locations throughout the vast consumer markets in the northeastern United States and eastern Canada. Annual operating costs range from a high of $21.3 million in the Meadowlands of northern New Jersey to a low of $13.4 million in eastern Ontario—a differential of over 30 percent. (All figures are in U.S. dollars.)

Companies looking to keep costs low, then, may be tempted to locate their warehouse or distribution center in a lower-cost area. For example, the Boyd BizCosts analysis shows that the least costly location for a distribution center in the northeastern part of North America is eastern Ontario, which is located between Toronto and Montreal and has easy cross-border access to the U.S. Northeast via I-81. Eastern Ontario's cost effectiveness is driven by a number of factors, including a favorable exchange rate, low land costs, absence of development fees, and lower corporate fringe-benefit costs owing to Canada's national health-care system. Our supply chain clients in the United States typically pay about 40 percent of their payroll for benefits; in Canada, that figure is closer to 20 percent. Additionally, the consulting company KPMG ranks Canada first among the G7 nations in terms of tax policies because of its low corporate taxation rates. These advantages end up trumping administration issues at the borders, which have been greatly streamlined in recent years by the Free and Secure Trade (FAST) program.

2. Increasing automation and the talent gap
Advances in technology and changes in the workforce are also having a large effect on how companies shape their distribution network and design their DCs. Automation on the manufacturing and warehouse floor is a well-established trend. Foxconn, for example, has already automated an entire factory in China and eliminated some 60,000 jobs. Meanwhile, "lights out" warehousing technology continues to advance, with key players like Amazon Robotics (formerly Kiva Systems) at the forefront. The International Federation of Robotics (IFR) reports that sales of industrial robots achieved an all-time record of 248,000 units in 2015, up 12 percent from the previous year. This trend will only intensify as robotic technology continues to advance, replacing not just blue-collar jobs but white-collar ones as well.

In terms of site selection, the trend toward automation means that companies are looking at whether a prospective site has high-speed fiber and sophisticated telecommunications infrastructure. Additionally, it will become increasingly important that a site be able to provide continuity of operations and be insulated from natural and human-induced disasters. These are factors that in the past were more commonly linked to our data-center site-selection projects than to distribution centers. But DC relocations will increasingly need to consider energy costs and the reliability of the grid due to the growing use of automation, the cloud, and robotic applications.

Similarly, one of the biggest challenges facing our site-seeking supply chain clients is finding skilled labor to assemble and run the high-tech tracking and material handling equipment on the warehouse floor—not to mention recruiting workers with much-needed skills in using the telecommunications technology and software related to this equipment. Today, the distribution warehousing sector is increasingly high-tech, and as a result, it suffers from many of the same problems recruiting skilled workers that advanced manufacturing companies in fields like aerospace and medical technology do.

In many markets, the available workforce is not properly trained, so our clients need to do their own in-house training. Site searches for new warehouses or distribution centers, then, should include a thorough examination of state workforce training programs and of local academic programs in logistics that can provide support for training, continuing education, and recruiting.

3. Last-mile delivery and storage lockers
Probably the most dynamic link in the supply chain in recent years has been the "last mile": that movement of goods from a DC to a final destination in the home. E-commerce king Amazon has done much to challenge and ultimately rewrite the rules of last-mile delivery. Last-mile delivery has also produced a new warehousing subsector: the locker. Studies show that online shoppers not only want their packages now, they also want their packages delivered to places other than their homes. These lockers can be viewed as "micro warehouses" and will come with additional costs. We expect many to be operated by an emerging sector of third-party logistics (3PL) providers specializing in this particular segment of the supply chain.

Lockers are now common in Europe, where densely populated and congested urban centers make them a natural fit. We anticipate that lockers will also become the next boom sector within logistics/distribution site selection in the United States. Amazon already has automated lockers in six states, while the U.S. Postal Service has lockers located within post offices in the Washington, D.C., area.

Upstart third-party logistics providers will be looking for sites where they can locate lockers, such as in transit centers, apartment buildings, convenience stores, or any establishment that provides off-hours access for picking up packages. Also, the growing online meals industry is expected to fuel the need for temperature-controlled lockers for the delivery of perishables.

4. Uncertainty in international trade
It's not just local or national concerns that are altering how companies make warehouse site-selection decisions. Export opportunities and trade agreements are also of growing importance to our clients. But there seems to be growing resistance in some regions toward free-trade agreements, as demonstrated by "Brexit"—the United Kingdom's planned departure from the European Union (EU)—and opposition to the Trans-Pacific Partnership (TPP) in the United States.

In general, we believe that it will take years for the details of Brexit to take shape, and to understand its resulting influence on warehouse site selection. That said, one of our first takes on Brexit relates to human resources. Many of our distribution center clients in the United Kingdom depend on low-wage, often immigrant labor to staff positions in fulfillment, light assembly, pick and pack, and material handling. As the immigrant labor pool contracts in the post-Brexit United Kingdom, our clients will likely be faced with labor shortages, inflationary wage pressures, and the need to beef up benefit offerings. At the professional level, non-U.K. talent in engineering, software, and information technology will also be more difficult and costly to hire and retain. Workforce training programs—already a pivotal site-selection variable here in the U.S.—will have to be expanded and better funded by U.K. policymakers.

It is likely that Brexit will also have the effect of slowing the pace of negotiations for the Transatlantic Trade and Investment Partnership (TTIP) agreement between the United States and the EU. That trade pact would create the world's largest free-trade zone—dwarfing even the North American Free Trade Agreement (NAFTA). Today, the U.S. and the EU together account for one-half of global gross domestic product (GDP) and one-third of all world trade. New DC investments related to TTIP in Europe as well as in the environs of U.S. East Coast ports like New York/New Jersey; Charleston, South Carolina; and Savannah, Georgia are also likely to stall given the slowed pace of TTIP negotiations.

The Trans-Pacific Partnership—which would connect the United States with 12 countries that together account for another 40 percent of global GDP—is currently stalled in Congress, and its likelihood of approval after the fall presidential election is uncertain, given both Hillary Clinton's and Donald Trump's stated positions on the controversial trade pact. Moreover, both candidates' positions on free trade overall are creating apprehension within the U.S. supply chain and are raising questions as to what trade and tariff challenges shippers will be facing under the next president—factors that could also influence decisions about new DC investments.

These four trends clearly show that warehousing has been at the crux of many changes in the past few years: new technologies, new customer demands, and new talent requirements. Meanwhile, a sluggish economy and an uncertain future have company executives keeping a close watch on costs. To navigate these changing times, warehouses and distribution centers will need to transform their operations to meet new economic realities while continuing to monitor costs like never before.